Hockey team flies off to Alaska

Yet another loss for the Wildcats, who are now 3-11-2. With 11 defeats, many are concerned for NMU Hockey. 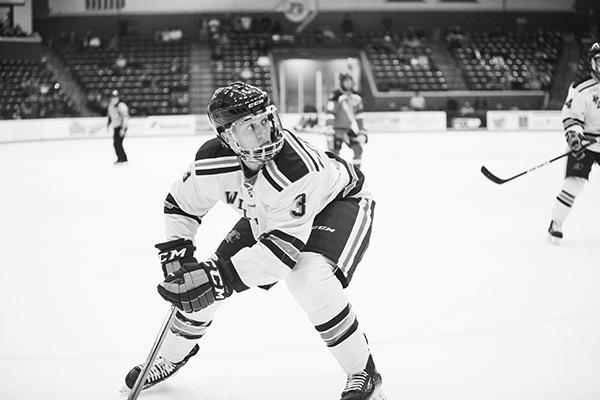 NMU hosted the University of Nebraska-Omaha over the weekend in a nonconference matchup and were unable to come away with a win.

Head coach Walt Kyle, while disappointed in the outcome of the games, said he’s impressed with the improvement the team made over the weekend.

“We were much better at the end of tonight than we were going into the game on Friday,” Kyle said.

Junior forward Robbie Payne said he thought the team    started off the game strong on Saturday.

“Everybody was really ready to play,” Payne said. “Getting into the second period, they scored twice in 14 seconds. That kind of dampens your spirit a little bit.”

The first period was a defensive struggle, only 12 combined shots on goal were made. Omaha opened the second frame with two goals and the ’Cats were never able to put a puck in the back of the net. The Wildcats continue the season in Anchorage to take on the Seawolves. The two teams last met for a series at the Berry Events Center on Feb. 5-6. The Wildcats came away with a sweep of the series. With the Wildcats’ record, Kyle said they’re looking to increase their games and get more wins in the two series left before the Christmas break.

“We have four league games, which are really critical to us, before Christmas and we’ve got to make our move here,” he said.

The Seawolves trail the Wildcats in Western Collegiate Hockey Association standings. NMU ranks ninth in the conference while Alaska comes in last in the conference at 10th. Alaska is 1-11-2, with an 0-6-2 record within the WCHA.

Payne said Anchorage is always a tough team but having to travel to Alaska is especially difficult.

“It’s a long trip to get up there and they’re playing at home. They have all the advantages in the world to play us,” Payne said.

Kyle said because the front of the season had several nonconference series, they have plenty of time left in the season to increase their WCHA standings.

“This is a big weekend, it’s a tough weekend,” Kyle said. “The guys know, they are well aware of it.”

Freshman forward Collin Peters has played in all 16 of NMU’s games this season and has come up with one goal and two assists.

The rookie said being able to play a role in the games as a freshman is exciting.

“It really boosts your spirits a bit playing in the games,” Peters said.

Peters said his favorite part about college hockey so far is the thrill that comes with each game.

“It’s exciting every night for me to get on the bench and be excited with the guys and go through it all,” he said.