Starting next week, sessions for student input on the Don H. Bottum University Center  (UC) renovations will be held across campus. On Monday, Jan. 23, 2017 from 12:30 to 2:30 p.m. students can go to the Wildcat Den and share any ideas or feedback about the renovation project. 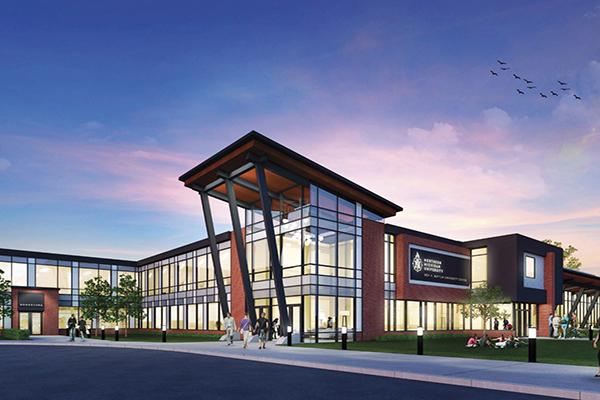 There will also be sessions held with ASNMU, along with other various student groups as well as residence hall leadership throughout the day. A final session will be held in the Marketplace from 6 to 8:30 p.m. With the renovation, NMU plans to create a modernized venue and enhance the conference function of the UC. This will entail a new exterior facade to create more of a signature facility at the main entrance, along with other upgrades.

Increased capacity for events is one of the major reasons for renovation, alongside addressing outstanding long-term maintenance conditions from an outdated building, said Kathy Richards, associate vice president of engineering and planning facilities.

“All of the ‘public spaces’ will get a facelift,” Richards said. “The [Wildcat Den] and the floor below will essentially stay the same.”

First floor changes include a spruced up two-story pre-functional area with large windows for natural light, a more visibly enhanced student enrichment space, a student activity zone for students to socialize, and a larger bookstore.

Second floor changes include the addition of four high-tech conference spaces with high ceilings in the south wing—with the capacity of 940 guests for a seated dinner, as well as a 1,300 theatre-style seating area in a ballroom-style space for hosting larger events. Existing conference spaces like the Great Lakes Rooms will be renovated with new technology and entry points as well.

Recently, the NMU Board of Trustees approved $1.3 million to proceed with the design phase of the renovation project. The budget for the entire renovation project is an estimated $17.5 million. As of now, an NMU-appointed committee is working with Nuemann/Smith Architecture on design plans for the remodeling of the UC.

However, the actual design is still in the programming stage and has yet to be decided, Richards said. Nuemann/Smith is an architectural firm out of Detroit that has also worked on other Michigan campuses such as Michigan State, Wayne State and Central Michigan universities.

“Money needs to be invested in the facility, no matter what, because it is in need of maintenance upgrades, so this is a great way of enhancing the building and providing possibly broader use of it to bring in more revenue, as well as addressing the maintenance needs of the facility,” Richards said. “The university needs to continue to upgrade their physical assets to maintain the value of them.”

For aesthetic reasons, some renovation ideas involve considering the UC’s relationship to its adjacent buildings of Gries and West Halls. The preservation of the UC lawn as well as “softening” the visual impact of the parking and concrete patio areas through the use of vegetation are also being considered.

Since its last upgrade 23 years ago, the UC has not received any new renovation even though the campus community has greatly evolved around it.

According to “A Sense of Time: The Encyclopedia of Northern Michigan University” by Russell Magnaghi, the UC was originally constructed section by section and completed in 1960. Then, the building underwent a major renovation of $7 million in 1994 to modernize and become more “user-friendly.”

“The last renovation wasn’t even a full building renovation,” Richards said. “It didn’t address a lot of the mechanical or electrical systems, so doing that is a part of this project.”
Since 1960, the 150,400 square foot building has served the NMU campus as a home base for the bookstore and many student organizations, as well as a place for many
university and community events.