Find out where the magic continues

Anticipation for this movie was building within the Harry Potter fandom as the release date drew near. It was no less when the theater filled with the familiar music fans of the Harry Potter series are sure to appreciate, but this film entails a new adventure. 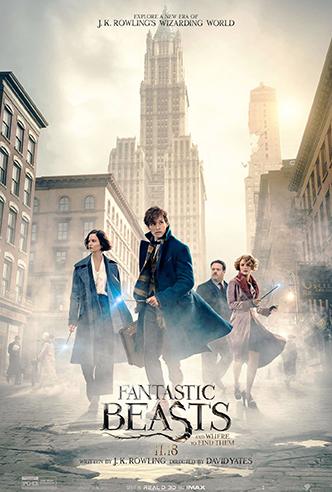 “Fantastic Beasts and Where to Find Them” follows Newt Scamander and his travels to the wizarding world in America, where he is on the hunt for a magical creature.

Story: The movie takes place in New York City in 1926. The story opens with Scamander, played by Eddie Redmayne, traveling by boat to America.

He arrives with his magical suitcase, carrying an array of beasts, but chaos ensues when his suitcase gets mixed up with Jacob Kowalski’s, a baker and ‘no-maj’ with no magic capabilities, who ends up helping Scamander recapture his creatures. As they switch suitcases, his beloved creatures begin to roam free in the city.

Scamander and Kowalski set out to capture one of Scamander’s creatures after it gets loose again, called a niffler, that is fond of anything valuable.

All of this is happening while Scamander’s other creatures are still rampaging around the city. The city is in disarray until Scamander and others step in and try to catch a different beast that is harming the city. The movie ends with a twist as they find out one of the people they thought to be a friend was actually a foe.

Characters: On the way, Scamander and Kowalski meet Porpentina Goldstein and her sister Queenie. The four of them grow close throughout the movie as they try to catch Scamander’s creatures and figure out what beast is disturbing the city.

Before Scamander came to America, none of them had met. They went from being complete strangers to friends. Queenie even falls in love with Kowalski. The love story was interesting due to the fact that wizards and non-magical people were not allowed to be together.

The actors who portrayed the characters were well suited to their roles and helped bring the movie together. Redmayne did an excellent job of portraying his character and the quirks he had makes him relatable. It was very easy to get into the movie and the character of Scamander and what he was trying to do.

Style: The writing fits the characters and the time that the movie takes place and lived up to the wondrous words that J. K. Rowling writes. This I expected because Rowling wrote the screenplay for the movie. The special effects in the film were also well done. They gave the movie a realistic feeling throughout, although mythically based. The movie had a budget of $180 million and this is shown in the special effects that were used.

Verdict: The movie does differ from the Harry Potter movies that it spins off from, but is still just as well done.

I didn’t know what to expect from the movie at first since it was a spin off from Harry Potter, but with David Yates directing the movie and J. K. Rowling writing, it didn’t disappoint. I was engrossed in the movie just waiting to see what would happen next. Overall, the movie was well done. There wasn’t one part that I didn’t enjoy.