The Women’s Basketball team now stands tied for fourth in the GLIAC North with the conference record of 5-4 (10-6 overall) after losing their last two games on the road. The Wildcats now prepare for a 5-game homestand starting Thursday when the ladies take on Lake Superior State University and continuing on to Saturday against Northwood University. 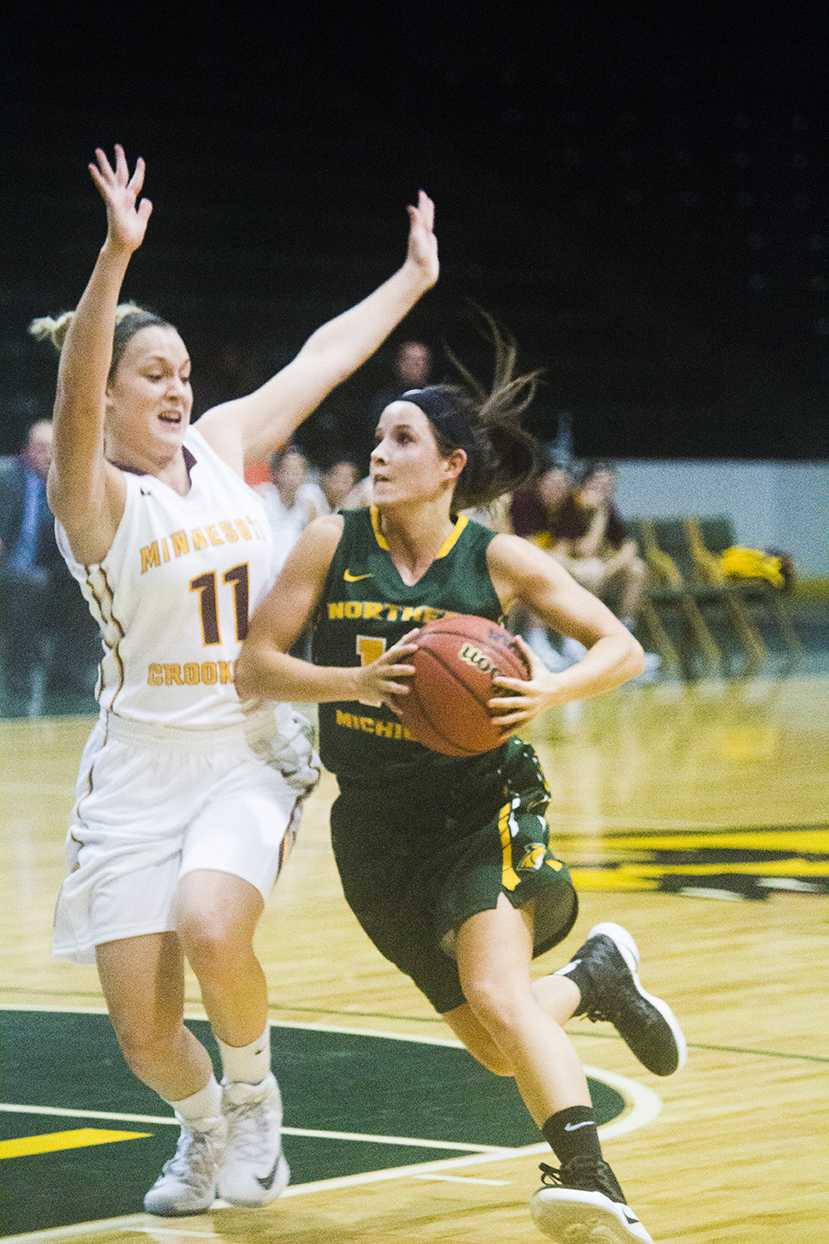 The Wildcats fell to the division leading Saginaw Valley State Cardinals 67-60 and the Wayne State Warriors 55-53.

Head coach Troy Mattson said he did not feel the team’s downfall was a lack of effort and said he believed both games over the weekend could have ended in a Wildcat victory had they taken advantage of more opportunities.

“We had a chance to win both games,” Mattson said. “They just made some plays coming down the end and we weren’t able to make the plays and the result is two loses.”

In Thursday’s game, the ’Cats managed to hang with the the No. 1 ranked Cardinals for the first quarter and even build up a 25-17 lead  punctuated by layup from senior guard Bre Gaspervich at the 5:20 mark of the second quarter.

Saginaw Valley answered back with a 9-1 run and tied up the score at with 1:28 left in the half and went into the locker room with a 3-point advantage the score at 27-30.

The Cardinals closed out the final quarter with eight successful free throws. Northern Michigan’s final points came from sophomore guard Darby Youngstrom, who sank two three-pointers in the final 17 seconds of the game which ended 67-60.

In Saturday’s match-up against the Warriors the teams maintained a close contest until Wayne State pulled ahead 48-40, their largest lead of the game, with 8:46 remaining in regulation time. The Wildcats clawed back, drawing within a single point, at 50-49, on a 3-point shot by sophomore guard Tess Weatherly with 3:32 left to play.

Northern Michigan would pull within a single point, at 54-53 with just 15 seconds left on the clock. On the final possession of the game, Gaspervich missed a layup, but Weatherly came up with the rebound to get the Wildcats one last look at the basket. Weatherly ultimately missed her three-point shot for the win and the game ended 53-55.

“I think our rebounding really stood out this weekend as something we need to put a little more effort towards,” sophomore guard Emily Schramek said. “Scoring I think has been a problem this year because we’ve been able to hold teams down to such little points. I think it’s our turn now to actually score the ball more because we are going to start playing better teams that will be harder to stop.”

The team now turns its focus to a series of home games at the Berry Events Center. The team will benefit from playing on their home turf; however, they will have to compensate for the absence of  sophomore guard Chloe Tompkins who sustained a season ending knee injury, Mattson said.

“[Tompkin’s injury is] a major blow to us. We have to restructure what we are going to do offensively more so than defensively,” Mattson said. “Defensively, we are probably going to be the same team or very similar. But offensively, we have to make some adjustments to try to help ourselves in that end of the court.”

Youngstrom agreed that Tompkin’s absence would be a challenge and added that other players must step up to fill the gap in order for future success.

“Chloe was our point guard so someone is going to have to fill that void of getting our offense going, I think people are definitely ready to do that at this point.”