Only 10 games remain in the regular season and the NMU hockey team looks to get as many wins as possible in hopes of grabbing a playoff spot, starting with their upcoming series against the University of Alaska-Anchorage Seawolves. 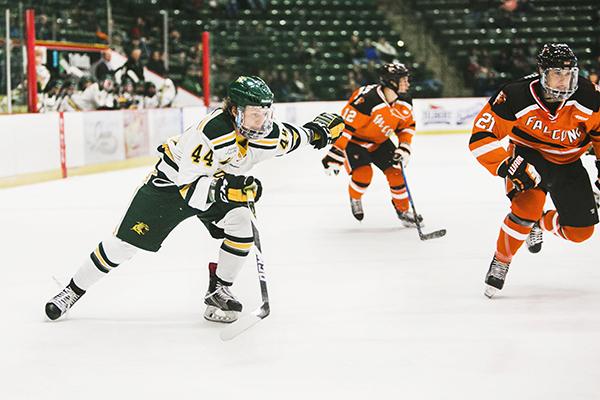 The past two weekends, the Wildcats played a home-and-home series against the Lake Superior State University Lakers for the Cappo Cup. NMU outscored the Lakers 10-9, bringing the cup back to Marquette.  The Cappo Cup was first awarded in 1991 by the late Louis Cappo, and has been given to the winner of the series every year since the 1994-95 season. The Wildcats have a 14-9 all-time advantage in the Cappo Cup series.

The first weekend the teams split, with the Lakers taking the Friday night win 3-2 and the Wildcats responding Saturday night with their own 6-4 win. The second weekend both games were tied at 1-1, with NMU getting the conference point after a shoot-out win by senior forward Dominik Shine on Saturday night.

Senior defenseman Brock Maschmeyer said the Wildcats have been improving their playing over the last few weekends.

“If you’ve been watching the last couple of games they’ve been awesome match-ups,” Maschmeyer said. “Playing against Lake State we started to find a little bit of a groove. We’re hoping that runs into this next weekend.”

Sophomore forward Denver Pierce is a native of Sault Ste. Marie and was handed the cup on the ice in his hometown. Friends and family watched as he raised the cup over his head in triumph.

“Shane Sooth told me to go grab the cup so that was pretty cool,” Pierce said.

Taking home the cup has given the team confidence going into the next series but their inability to score has held them back this season, head coach Walt Kyle said.

Sophomore goaltender Atte Tolvanen had 0.96 save percentage over the series and Kyle said it’s not Tolvanen’s goaltending that’s led the lackluster season.

“We talk about goal support,” Kyle said. “In the last three games he hasn’t had any goal support. [Tolvanen’s] done everything he could do to win the game and it’s up to us to give him better goal support.” The ’Cats have a 5-17-4 record overall, with a 3-12-3 record within the Western Collegiate Hockey Association. This puts the ’Cats at 10 out of 10 in the WCHA standings, just below the Seawolves going into their series together. The Seawolves are 5-14-5 overall and 4-9-5 in the conference.

The Seawolves tied both of their games against Michigan Tech last weekend, but scored in the 3-on-3 overtime to get two league points on Friday night. On Saturday night Tech grabbed the league points after winning the shoot-out.

The Wildcats traveled to Anchorage the first weekend of December to take on the Seawolves and came away with a split.

Pierce remembers the games being tough and the Seawolves being a strong team.

“They’re a hard team to play against. They have good goaltending,” Pierce said. “They’ve been playing pretty good as of late.”

With both teams being so close in the standings, Maschmeyer said he expects both teams to come in hard into the series.

“Every series from here on out is a make-or-break weekend,” Maschmeyer said. “We have to get both wins and we know where we are in the standings. We’re not supposed to look at it but we know what we have to do, and to get into the playoffs we have to win.”