“This little light of mine, I’m gonna let it shine.”

A chorus rang out from a small section of the crowd gathered on a gray, foggy and warm winter day where about 800 people packed the corner of Washington and Third streets despite the light rainfall. The Marquette Women’s March, a sister march to the Women’s March on Washington that brought over half a million people to Washington D.C., was part of a global anti-inauguration protest against President Donald Trump held on Jan. 21. Protests occurred on every continent throughout the world. 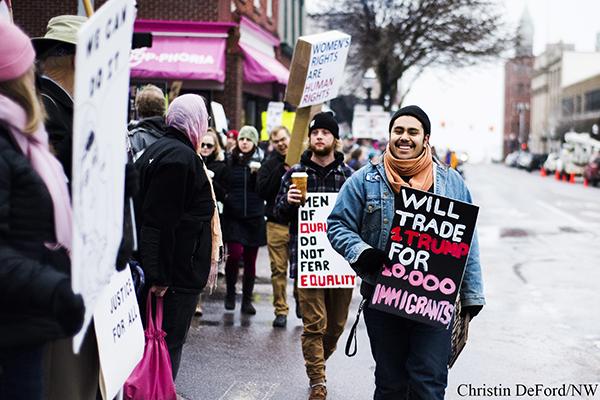 NMU students, professors and community members of all ages participated in the Marquette march. Sophomore political science major Hannah Rushton attended the march expressing her belief in the responsibility to speak out.

“I want equality for women. I want to break the gender gaps. It’s really important to me,” she said.

“The majority of the people in this country don’t actually want what’s happening right now so it’s important to make sure that everyone knows that,” he said.

Hillary Clinton won the popular vote in the election, surpassing Trump’s number of votes by 3 million.

A sea of signs floating above the crowd read things like, “Just because we have ovaries doesn’t mean we don’t have balls,” and “Women are not pre-existing conditions.”

“Primarily we are here in support of our wives and all courageous women that are in Washington standing up against the Trump agenda of sexism, greed and racism,” Uballe said.

Cheers erupted from the crowd as people drove by honking their horns, sometimes holding signs out car windows in support of the protestors.

Jane Milkie, a professor of art and design, said she was at the march for issues of climate change, student loans and women’s rights.

“I’m standing here for future generations of all daughters,” Milkie said. She had a hard time understanding the arguments coming from the other side of the aisle, but a silver lining exists among all the strife, she said.

“Young people with their voices are coming forward, and it lends me some encouragement,” she said.

Josué Briones, an NMU alum who graduated in December, marched with the Marquette protestors in support of immigrant rights. He held a sign reading, “Will trade 1 Trump for 10,000 immigrants.” He said both of his grandparents and his mother were born in Mexico.  “I am following in the footsteps of my grandfather. He fought for immigrant rights,” Briones said. “[The march] is a beautiful thing. I’m happy to be here.”

Keith Ellis, associate professor of art and design, said the issues are larger than any one individual and people must show their response.

“We can’t just sit by,” Ellis said. “I think a good leader is somebody who can respect the other side at least. I don’t believe everyone has to agree with everyone but at least you need to be able to see things from both sides, and this is a presidency that is completely myopic.”