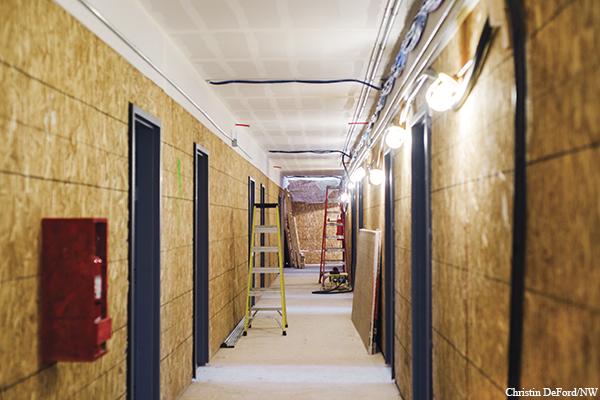 Next semester, 400 new beds will become available on campus as NMU moves forward with an $80 million housing project to replace the old Quad One dormitories.

As of now, the southern buildings of A and C in the six-wing housing facility are complete and will be ready to be filled by students in the fall.

“There is nothing in [buildings A and C] that will prevent us from moving forward,” Jim Thams, director of engineering and facilities planning said.

“In both instances we’re up four floors—we have the roofs on. Building A is completely dried in—shingles installed; windows in. We’ve completed mechanical and electrical rough-in and we are working on drywall—that includes taping and mudding.”

He said Buildings A and C are the farthest along in the project so far and every building will have four floors.

There are four stories up now for half of Building B, Thams said. Building B will include a basement containing all of the mechanics and wiring for the new facility. There were also roof trusses put on last week, and both the floor and deck were poured.

Thams said Building B took longer than others because of the mechanical additions to the basement. He also said the rest of the building will come out of the ground, above the basement, potentially starting this week stating, “We should have walls starting to come out of the ground here shortly.” Thams said footings were set around Building D prior to winter, with the addition of one stair tower. He added that NMU is letting the building sit until spring to resume construction.

The rest of the buildings will open in pairs subsequently every semester, with the two middle buildings of B and D expected to open up the winter semester of 2018, followed by buildings E and F the next fall semester.

Thams said the lodge, which will serve as the central hub for the new dorms, is just starting to come out of the ground as well and will open up in mid- to late October.

“At the same time, we’re also working on the connector link,” he added.

The connector link will run east to west, connecting all of the six new dorm wings to one another as well as the Marketplace.

Thams said there was a Request for Proposal process, where developers submitted their own proposals to assist NMU with the housing project and EdR was selected. He noted that there was an “extensive” process of evaluation before NMU shortlisted down to three potential candidates, and EdR was ultimately chosen as the right fit. He said the decision was made with regards to both evaluated costs and the characteristics of the team.

“They were chosen because, at the end of the day, they brought the best team to the table and they‘re a very reputable company,” Thams said.

The new housing project, which began in July 2016, is being brought to campus in collaborative effort between Tennessee-based national collegiate housing developer and manager EdR, Nuemann/Smith Architecture, NMU Engineering and Facilities Planning, along with Walbridge Construction Management.

The next building slated for demolition is Halverson, which will begin in the summer and the project is expected to be complete by the fall semester of 2018.