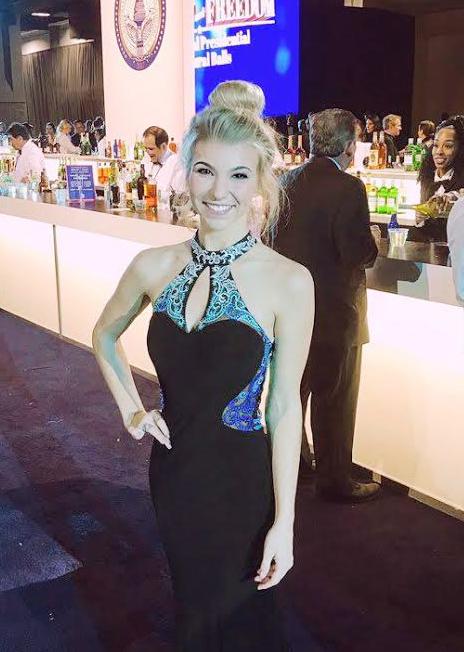 “You saw the whole Trump family dancing 50 feet away from you, and you’re rubbing elbows with Marco Rubio,” NMU student Amanda St. Germain said, describing her experience as a guest at one of the three 2017 official inaugural balls for President Donald Trump.

The 20-year-old freshman general academic studies major from Marquette, Michigan was hired to go to Washington, D.C. as a private photographer for a talk show host. Because of this connection, she was given a ticket from the Presidential Inaugural Committee to attend the Freedom Ball on Jan. 20.

In addition to taking classes at Northern, St. Germain manages her own business, Amanda Nicole Photography. She was hired by Fox News Radio ABQ-FM in Albuquerque, New Mexico to accompany Langston Bowens, the sales director and co-host for one of the station’s political talk shows.

Bowens is chief operating manager, she said, for Generation Onward, a conservative nonprofit for millennials that encourages political activity and promotes “fundamental American values,” according to the organization’s Facebook page. It’s the student campaign for Trump, St. Germain said.

Bowens went to Washington, D.C. on the company dime to take advantage of the opportunities to interview political figures during the inauguration season, she said.

“They sent him and paid for all his expenses and said, ‘We have all these connections with senators and congressmen. They’re all going to be in one place. We’re sending you out there to conduct interviews.’ That’s when he said, ‘Can I have a photographer?’ And he knew he was going to ask me,” St. Germain said.

She left Marquette on Jan. 18, arrived in D.C. that night, worked the next two days and returned on Jan. 21. Those two days of work were hectic and exhausting, she said.

“I literally did not sleep or eat. It was a straight 48 hours, because they don’t stop working,” St. Germain said.

In D.C., they joined with Jonathan Soo Hoo, a friend of Bowens’s who is studying to be a lawyer at George Mason University and hopes to eventually run for public office. They met the Young Republicans and attended private events.

They interviewed people at all hours of the day and night. Langston had a briefcase full of recording equipment, while St. Germain took pictures over Bowens’s and Soo Hoo’s shoulders. Their biggest interviews were with New Mexico Rep. Steve Pearce and Ted Dooley, co-chairman of the College Republican National Committee.

The Freedom Ball was the last thing they did before she got on her return flight. St. Germain was only there as a guest, not part of the news media coverage.

“It was kind of like a thank-you for all I did,” she said. “I just took a few pictures for memories.”

There were three official inaugural galas: the Freedom Ball and the Liberty Ball, which were attended by supporters who donated to the inauguration and were both held at the Walter E. Washington Convention Center, and also the Salute to Our Armed Services Ball for veterans at the National Building Museum. The Trump family made stops at each of these celebrations.

“It was like a high school dance only much bigger and a lot more money was put into it,” St. Germain laughed, commenting that champagne cost $20 a glass and water was $5.
She was within 100 feet of Trump and his family. Trump danced to the song “My Way” with his wife, the president mouthing the words.

Bowens had been national chairman for Students for Rubio, Sen. Marco Rubio’s college student presidential campaign, so they got to meet the Florida senator and other congressmen, she said.

“There’s this unwritten rule in politics that I had to learn really quick: You can’t make a big deal out of anything,” she said. “It doesn’t matter if you’re meeting Trump. You just shake his hand, say, ‘It’s nice to meet you,’ and then walk away.

You can’t say, ‘Oh my gosh, can I have a selfie?’” She laughed. “I went on Facebook Live when I was at the ball, and I got reprimanded [by Bowens and Soo Hoo] for that. They kind of slapped me on the wrist, but you know what—that was worth it. My mom and boyfriend back home were watching. There was no way I wasn’t going to show them.”

Inside the gala was all glitz and jubilee, but protesters gathered outside. St. Germain experienced this high tension while weaving her way through the labyrinth of barricades and metal detectors, waiting in line to get into the event.

“Buses would open and 50 police officers in riot gear would get out,” she explained. “That was the real crazy part. There were helicopters circling around. Protesters everywhere, screaming and throwing water. Inside, I felt safe. But walking outside, I was scared.”

St. Germain also saw part of the Women’s March in D.C. and said it helps when protesters get into politics.

“It was like completely different spectrums. I was happy to see that there was peaceful protesting somewhere. But it wasn’t outside the ball, though.”

She returned to Marquette fatigued and wide-eyed from her adventure.

“I was taken out of my hunky-dory hometown, and I was thrown into a shark tank, because that’s how politics operate—and I knew that, everybody knows that—but there’s a difference between knowing something and actually experiencing it. I think I was prepared, but not nearly as prepared as I should’ve been.”