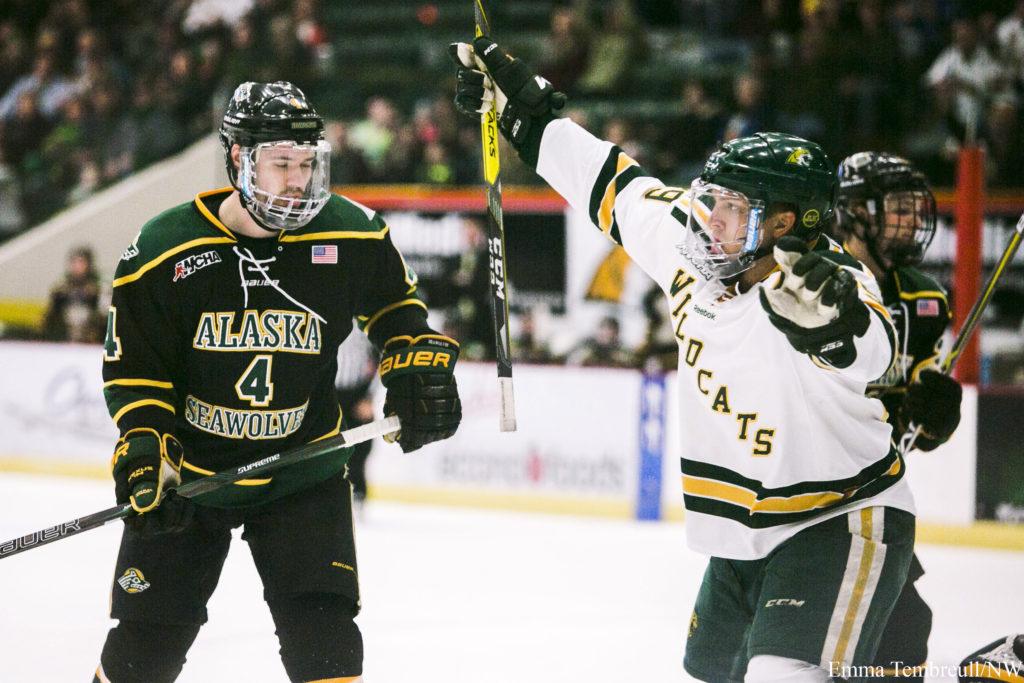 The Wildcat Hockey team broke out their brooms again for their second consecutive sweep before they head into their final home series of the season.

During Friday night’s contest against the Bowling Green State University Falcons, sophomore goaltender Atte Tolvanen deflected all 35 shots the Falcons threw at him.

Senior forward Shane Sooth and junior forward Zach Diamantoni each found the back of the net during the first frame and junior forward Robbie Payne had an empty net goal in the final minute to end the 3-0 game. Tolvanen made a season-high 40 saves in the series shutout of the Falcons. Senior defenseman Brock Maschmeyer started the scoring halfway through the second period. In the last second of the game senior forward Dominik Shine threw a shot into another empty net.

While the Falcons were favored to win the Western Collegiate Hockey Association in the preseason coaches’ poll, they stand at No. 4 in the conference. Tolvanen said standings don’t determine the outcome of the game.

“In this league every team is a good team, anybody can beat anyone any given night,” he said. “We have to bring it both nights.”

The ’Cats move onto their series at the Berry Events Center. They host the University of Alaska-Fairbanks Nanooks at 7:07 p.m. on Friday and Saturday night. The Nanooks sit at No. 5 in the WCHA standings with a 8-11 conference record.

Wildcat head coach Walt Kyle said the key to defeating the Nanooks is strong goaltending, which he said Tolvanen can do.

“Atte’s a great kid. No one works harder or is more focused than him,” Kyle said. “Right now he’s playing exceptionally well.”

“It’s really nice to see Atte coming along right now in the second half, looking like the Carey Price of the WCHA,” Maschmeyer said.

It’s been over a year since the two teams have squared off, last seeing each other on Jan. 15-16, 2016 at the Berry. Former forward for the Nanooks Alec Hajdukovich scored an overtime goal to give Alaska the victory in the series opener. The second night of the series Maschmeyer and former defensemen Ryan Trenz and Barrett Kaib brought the team back from a 3-2 deficit in the third period to secure a victory for the ’Cats.

The Nanooks are coming off of a series against the University of Alabama-Huntsville. Head coach Dallas Ferguson said the team had good pace and competitiveness that led to their 3-0 victory.

Ferguson said the second night the lines were disconnected and Alabama played with the intensity to deserve the 4-1 win.

“It’s a repetitive message but it’s a tough league and when a team loses on the first night you know that team is going to come back even harder to get the points on the second night,” he said.