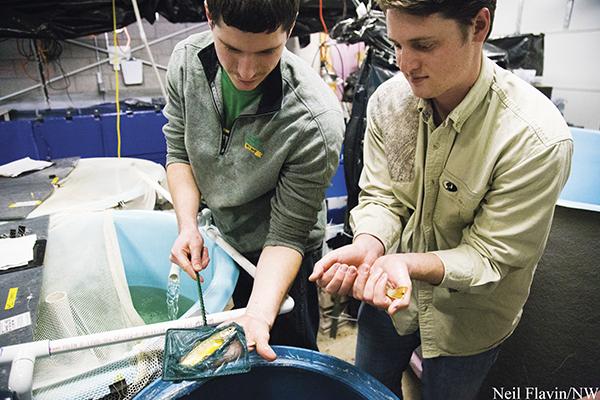 “We need you now more than ever.”

This idea was woven into many conversations with multiple students and professors working in the biology department and the Department of Earth, Environmental and Geographical Sciences (EEGS) calling for future scientists to continue fighting for environmental protection.

This is in response to the election of President Donald Trump, who has called climate change a “hoax,” prevented federal agencies from discussing climate science with the public and issued a hiring freeze for all federal jobs, including the National Parks Service and other common jobs for EEGS students.

Spenser Chicoine, a graduate student pursuing a master’s in biology who studies the effects of changing climate on brook trout native to the Upper Peninsula, said in an email that the denial of climate science makes it harder for him to communicate the importance of his research.

“On a grander scale, with climate change science under attack, I am anxious that my ability to study or talk about many of the issues I consider important may be restricted.”

Additionally, some of the orders issued by President Trump were the advancement of the KeyStone and Dakota Access pipelines for completion and talk has surfaced on the defunding of the Environmental Protection Agency (EPA).

Professor Jill Leonard, who teaches ecology and biology, said it’s common for her students to be hired by federal agencies like the National Park Service and that many are unsettled about what their future plans are.

“It’s a big kerfuffle, and there are students who are being impacted right now. They don’t know if they will be hired for jobs they thought they would be hired for. However, in the long term, that’s probably a short term effect on them right now but I don’t think it will last forever,” Leonard said. “For students, everything is immediate. They don’t have any money, they can’t deal with six months off. They go back to living in their parents’ basement.”

Senior ecology major Taylor Preul interned for the federal park service twice, once at the Sleeping Bear Dunes and once at Yellowstone National Park. She applied for a full-time job and although interviewed, she was not offered the job because of the hiring freeze issued by President Trump.

“It is kind of intimidating, especially as someone that’s graduating, to know that there really isn’t that much job security in the future,” Preul said. “The hiring freeze, while it’s only temporary—it’s only a 90-day hiring freeze—it kind of is an indication of the future status of these sorts of jobs, throughout the course of the administration.” Preul said the administration’s overall attitude toward climate science and natural resources is more imposing than the temporary hiring freeze.

“‘Oh let’s just get rid of the EPA,’ that’s scarier than the hiring freeze.”

Because the freeze only affects jobs on the federal level, graduating students can still find work in the private, non-profit, state, local or tribal sector, Preul said.

“There are definitely a lot of job opportunities,” she said. “You just have to know where to look. There are so many levels of resource management aside from the federal level so there’s a lot that they don’t directly control, like state parks, and state forests.”

Despite the attitude of the current administration toward environmental protection work, students working in the EEGS department express an overall sense of hope for their future working in science, said senior zoology major Connor Richter.

Working in the field might be harder than before but the oppression of the industry won’t be a permanent thing, Richter said.

Students’ chances of getting hired for the EPA may have temporarily decreased, but the private sector has responded and funding for climate change research has increased, said Sarah Mittlefehldt, a professor in the EEGS department who specializes in environmental policy, sustainability, and environmental justice.

Mittlefehldt is trained as a historian and understands how the political context surrounding environmental policy changes over time. While clean air and water were considered important issues in the 1970s, climate change dominates the discourse around environmental issues today, she said.

Mittlefehldt also noted that swings occur from one presidential administration to the next. For example, President Ronald Reagan appointed the Secretary of Interior James Watt, who led a movement to open federal lands to private industry and argued for state control of public resources. The environmental community came together around this issue in the 1980s and it’s doing so again, Mittlefehldt said.

“This administration has given otherwise disparate groups a specific rallying point to collaborate against,” Mittlefehldt said. “Those concerned about social justice, environmental protection, and accountable governance now have a common challenge that can bring groups together.”

“Many of our students in the EEGS department are very passionate, and very committed to environmental issues. That passion will fuel them to do good work no matter where they end up.”