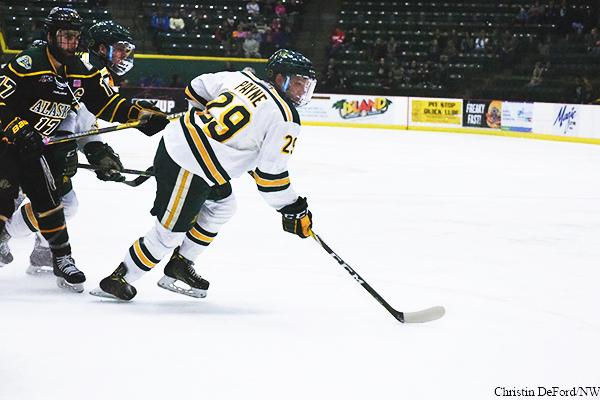 A swift slap to the puck put Atte Tolvanen and the Wildcats’ 5-game shutout record to rest just 3:26 into the first period of Friday night’s game.

After a 9-game unbeaten streak and a 6-game win streak, the hockey team were swept by the Minnesota State University-Mankato Mavericks. Their series was a disappointing lead into this weekend’s rivalry against the Michigan Tech Huskies.

Head coach Walt Kyle said it was a good contest against a very competitive team.

The long-standing rivalry between the Wildcats and the Huskies is renewed this weekend as the ’Cats look to grab one of the final playoff spots in the
Western Collegiate Hockey Association.

NMU is currently ranked No. 8 after their loss to the Mavericks, getting knocked down from No.6. Only the top 8 teams get a seed in the playoffs. Junior forward Robbie Payne said the team is excited for the possibility of winning this series because six weeks ago they didn’t see the playoffs as possible for them.

“Coming into this weekend we know if we win one game, if we win two games we’re likely to be in the playoffs,” he said. “We know it’s going to be a tough series but they’re games we want to win.”

Pending the results of the game the Wildcats could finish anywhere between No. 6 and No. 10 out of 10 in the conference. A stark difference for the team that was 5-17-4, and ranked No. 10  just six weeks ago. Freshman goaltender for Tech Angus Redmond made his debut the first game of the series last time the Wildcats met with the Huskies. In the Friday, Oct. 28 game Redmond also recorded his first collegiate shutout in a 2-0 win.

He continued the weekend of firsts with his first collegiate sweep when the Huskies beat the ’Cats 5-1 on Saturday night.

Junior forward Zach Diamantoni said while Tech has one of the best defensive groups in the WCHA, NMU has come along in the second half of the season.

“We’re going to be a bringing a better game than we brought in the beginning of the year,” he said. Friday night’s game brings the end of the season at the Berry Events Center, and the last home game for the senior class. Kyle said he hopes the rivalry and senior night will bring big crowds to the Berry.

“We have a good core of seniors here,” he said. “They’ve given a lot to the program and they’re a good class. I’d like to see them go out with a great crowd here on Friday.”

Payne said they are always looking for a win against Tech but the fact that it’s senior night makes them push a little harder.

“It’s going to be sad to see them go,” Payne said. “We’re going to be looking for a big win, a big couple weekends here to finish their careers out.”