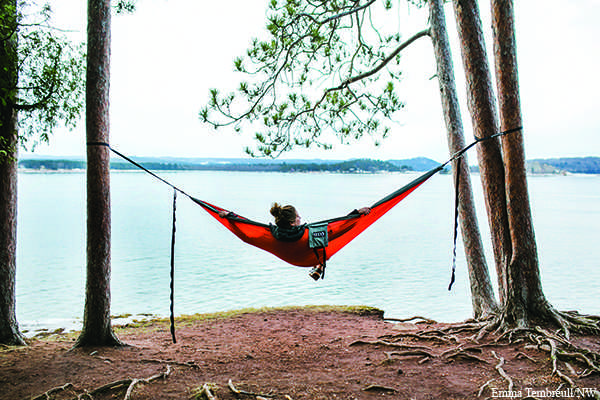 An NMU email sent on Tuesday, Feb. 21 alerted students of the newly increased Public Safety enforcement of the City Code Ordinance under Section 22-135, “Abuse or mutilation of public trees,” which prohibits hammocking “that uses ropes, even if designated as ‘leave no trace’” in public city areas.

The ordinance prohibits the “Attachment of any rope, wire, nails, advertising posters or other contrivance to any tree,” and recently became applicable to hammocking due to increased damage of trees in city areas such as Presque Isle Park. Violators can be ticketed and fined $25, increasing with each day of violation.

Students began to respond shortly after the email was sent. Many were puzzled, questioning if “leave no trace” straps were permissible, what is considered city public property and if slacklining too would be affected.

“It causes [the trees] to not be able to take the water and nutrients all the way up in an efficient manner. Studies show it cuts down on the amount of photosynthesis the tree can actually do.”
The ordinance has been in place since 1985. The recent upbringing comes from the now noticeable damage at Presque Isle Park.

“It’s been a situation where we kind of waited to see if it was really indeed a problem and we’re finding that it is,” Swenson said.

Concern comes from irresponsible behavior such as breaking branches for ideal hammock spots and hammocking in erosion areas. Swenson believes this is due to lack of “leave no trace” knowledge. These actions cause trees continual stress and raise tree disease and death, he said.

“From what I understand there wouldn’t be a ticket right away it’s more of an education type thing,” Swenson said.

Swenson suggests students research “no-trace” ethics and apply the knowledge to all their ventures on state, private or city land to lessen the overall effect of the public on the outdoors.

“If you were to pick a backcountry site, string a hammock and that’s the only time those two trees receive that leave no-trace webbing, it’s not going to do a thing to that tree,” explains Swenson. “But if those same two trees get strung every single nice day, that’s where the difference comes.”

Senior digital cinema major Sam Ozanich is a campus brand ambassador for Eagles Nest Outfitters, or ENO, a hammock brand that ranks popularly among enthusiasts. As an ambassador, it’s Ozanich’s job to use social media to advertise hammocking anywhere without causing harm to trees.

Educated in “no-trace policy,” Ozanich recommends finding ways to reduce the pressure between the tree straps and the tree anywhere by placing pieces of felt or a towel on the opposing side of both trees. Passion aside however, rebelling against the law by purposely installing hammocks illegally won’t prove a point to the city, Ozanich said.

Passion aside however, rebelling against the law by purposely installing hammocks illegally won’t prove a point to the city, Ozanich said.

“Banning hammocks in cities is not anything new,” Ozanich said. “When I lived in Colorado two years ago, hammocks were illegal in the city of Boulder as well as slacklining for fear of damaging the trees.”