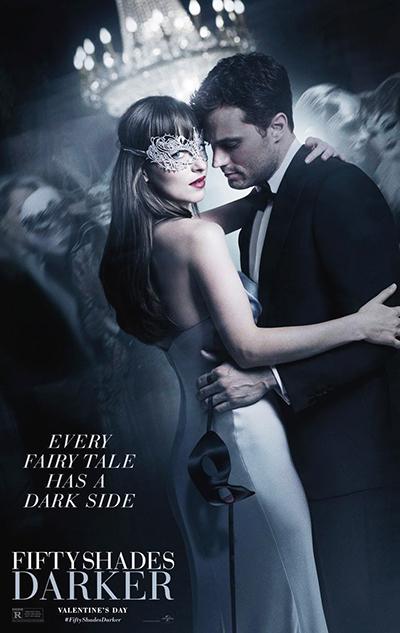 Armed with popcorn, a smattering knowledge of the “Fifty Shades” plot line and a viewing of the previous film, I prepared myself for the bumpy ride.

Based on the books of the same name by E.L. James, “Fifty Shades Darker” is the sequel to 2015’s “Fifty Shades of Grey.” Both films star Dakota Johnson as the awkward yet attractive Anastasia  “Ana” Steele and Jamie Dornan as the brooding Christian Grey.

As the film goes on, Ana wants more out of the relationship and Christian wants to further the contract with more sex. Ana leaves Christian, and the credits roll.

The solid 4.1 out of 10 on IMDb coupled with a handful of Razzie awards, including “Worst Picture” and “Worst Screenplay,” proves the film to be less than mediocre.

“Fifty Shades Darker” opens with reminders that Grey is brooding with a darker past (Get it? Darker?), and that Ms. Steele is awkward yet pretty. Ana is living it up in her self-described “dream job” as an assistant to a sleazy editor at a publishing house in Seattle.

Predictably, Christian finds Ana and wants her back. Despite all the things that made her uncomfortable in the first film, she agrees to get back together with him. She says several times throughout the film how she’s going to fix him, or work on his problems together with him.

Tensions arise. A roller coaster-like obstacle course of a plot ensues. A sprinkle of forgettable antagonists show up every once in awhile and are quickly dealt with. Ana gets emotional a few times over problems with Christian, his broodiness and clear childhood issues. Things get resolved in the end with enough slack to leave room for another sequel, and the credits roll.

The few positive awards that the predecessor film managed to snag were purely based on music, featuring artists like The Weeknd. With an original score composed by longtime favorite Danny Elfman, I had high hopes.

However, the constant overuse of saccharine pop songs in the background of dramatic scenes left me feeling annoyed. More than once I was pulled away from the actual happenings of the film by the misplaced music choices.

To amplify the fact, the soundtrack features a grand 17 dramatic lyric-filled songs—the fact that they’re all crammed into this movie is astonishing
and irritating.

The biggest killer of the film is undoubtedly the acting and the dialogue.

The book itself features Christian saying such winners as, “I don’t know whether to worship at your feet or spank the living shit out of you,” and don’t give the movie a great platform to step on to begin with. All the same, throughout the movie I was laughing at an awkward moment of communication between the two main characters. With bad dialogue coupled with lackluster acting (with rare moments of genuine interaction), the film is absolutely brutal to watch as a serious film.

But with a budget of a meager $55 million, “50 Shades Darker” has pulled in over $300 million in sales. At the same time, I’m convinced that those who bought tickets only went to see the film because they’re diehard fans of the similarly bad books. Or perhaps the moviegoers wanted to witness the full effect of the bad movie in theatre form—like me.