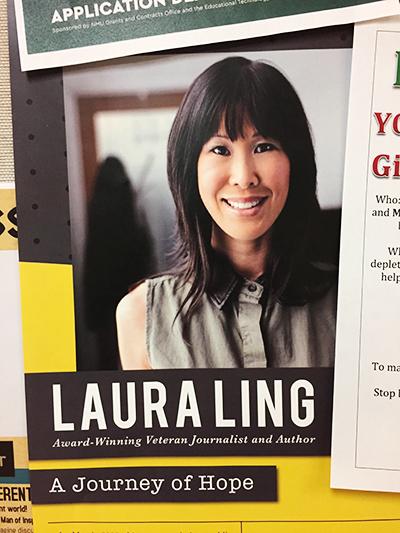 Upon being freed after 140 days of captivity in North Korea, an award-winning journalist will share her story with the NMU community tonight in the Jamrich Hall auditorium.

TV/web host and award winning journalist Laura Ling will present “A Journey of Hope” at 7 p.m in 1100 Jamrich.

Ling will talk about her captivity in North Korea that resulted from her attempting to report on the trafficking of women in the country, a story that has been projected internationally on multiple news networks like the Korean National News Agency CNN. She will also be presenting a six-minute video that gives a sample of the different stories that she has worked on from around the world before going into her presentation.

“The presentation opens up an awareness of different equity and equality issues around the world that she’s tackled. It will open up thoughts and ideas of people about what’s going on.” Rachel Harris, adviser of Platform Personalities said.

Ling dedicates herself to raising awareness and educating the public on important global issues such as slave labor, women’s rights in the Middle East and the energy crisis in Sub-Saharan   Africa.

“The awareness of what’s going on in the world is important. It is important to try and educate yourself on what’s happening and know the issues in your community and your country,”    Harris said.

Her written work includes a co-authored book titled “Somewhere Inside: One Sister’s Captivity in North Korea and the Other’s Fight to Bring Her Home.” She wrote the book with CNN reporter and sister Lisa Ling.

“It was fascinating because her sister Lisa Ling spoke at NMU the same year she was held captive. Within weeks of her speaking here, her sister was captured in North Korea. We were all well aware of her situation at the time. Bill Clinton helped her get out, and I’m anxious to hear what diplomatic efforts got her out of prison in North Korea. I think they’ll find the presentation very worthwhile,” Harris said.

Ling is also the host of “Conquered” on Z Living Network, a series about people who have crossed controversial lines to achieve their goals. Additionally, she has hosted two documentary series on the E! Network and develops programming for Seeker, Discovery Communication’s digital network.

Ling has received numerous awards including an Emmy, a national Edward R. Murrow award, as well as a national    Gracie Award.

The presentation is being held by Platform Personalities and the Student Activity Fee.

“She has a couple different things that attracted students to pick her. Having been held captive in North Korea and being an award-winning journalist tackling social justice issues. The students thought that was very interesting,” Harris said.

The event is free for NMU students and $2 for the general public.