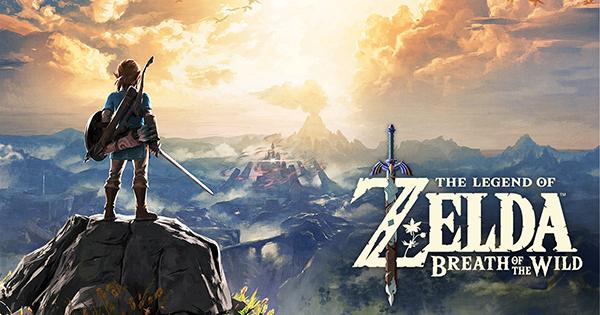 “The Legend of Zelda: Breath of the Wild” is an open-world game done right, with variety in aesthetic and gameplay to keep you exploring for hours on end. Like the previous games in the series you play as Link, an adventurer predestined with the task of saving Princess Zelda and defeating Ganon.

Unlike previous Zelda games, you are given free rein to accomplish this goal in whatever way you see fit. You can go from dungeon to dungeon in any order, finding weapons and armor and upgrades that will help accomplish your goal or you can sprint straight to the final boss with a slim-to-none chance of success.

Exploration is a feature of every open-world game, but few have mastered it the way “Breath of the Wild” managed to. Hyrule is a vast continent packed to the absolute brim with discovery and mystery and there’s nothing stopping you from investigating it all.

An orange glow upon a towering mountain’s peak? Climb your way to the top to check it out. A strange island shrouded in fog out at sea? Soar from a high altitude with your hang glider or sail with a raft to reach its shore. The only thing hindering your ability to explore is an upgradeable stamina meter that can be constantly replenished with food and potions, meaning that with preparation, the sky’s the limit.

While traversing the varied landscapes of Hyrule, you’ll inevitably run into enemies that need to be slain for treasure, progression or equipment. The variety in these encounters is astonishing—sometimes you’ll be assaulted by arrows from Bokoblin, you might be electrocuted by a Yellow ChuChu, or you could be pummeled by a skeleton tossing his limbs at you. The way that you handle these enemies is varied as well.

You could blast an enemy camp with bombs, use arrows to quietly take out foes one by one or just run in swinging your sword to finish them off. Combat in “Breath of the Wild” is challenging and diverse, offering fresh experiences in every scenario.

Your equipment will often determine your success in battles, especially because of the new weapon degradation feature “Breath of the Wild” introduces. Your swords, axes, shields and bows will all break after a certain number of uses, forcing you to manage your inventory carefully. Before fighting difficult enemies, it’s important to make sure you’re equipped with the tools to survive.

Between battles and weapon management, you’ll frequently stumble upon Shrines—mini-dungeons that require puzzle-solving and a mastery of tools to conquer. At the beginning of the game you’ll find a toolkit of items called runes that can be used to experiment with objects in the world but are often required to unlock doors or reach platforms to complete Shrines and get Shrine Orbs—essential items that allow you to upgrade your health or stamina.

While “Breath of the Wild” improves on almost every aspect of “The Legend of Zelda” and open-world games in general, it’s definitely not perfect. Some Shrines require the use of tedious motion controls that will have you fighting with the controller more than the puzzle.

Certain abilities that you find turn boss fights that might have been a challenge into a cakewalk. Weapon degradation and inventory management is usually interesting but can quickly become frustrating when you’re constantly trashing weak weapons to make room for decent ones. The story is fun, but some poor voice acting sours moments that would otherwise be extraordinary.

The most disappointing part of “Breath of the Wild” is its graphic performance.

The fantastic art direction makes every region in Hyrule look gorgeous and feel alive, but certain parts of the world are too dense with action for the game to keep up. In areas with lots of effects, like explosions or lasers or moving grass, the game slows down, sometimes completely freezing for seconds at a time. The action and exploration is so enjoyable that something as obnoxious as stuttering frame rates is a painful reminder that even incredible games have flaws.

Even with these issues, this game succeeds in many areas where other video games fail—it’s fun from beginning to end. After over 40 hours of roaming Hyrule, battling enemies and completing the main story, there’s still wildly new Shrines, enemies, weapons and areas to discover. The Zelda series has felt stagnant and formulaic for a few installments but “Breath of the Wild” innovates enough to claim a spot as one of the most captivating games in the series.