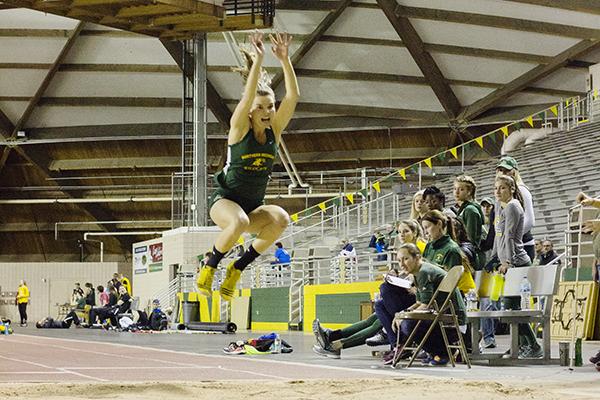 Junior Kameron Burmeister earned All-American accolades after taking 11 out of 17 in the 5,000-meter run with a time of 17:12.02, earning NCAA All-American second team.

Burmeister said she couldn’t be happier with her performance.

“I was just happy to have finally qualified to run at the NCAA championships,” Burmeister said. “My only goal going into the race was to try and be the best version of myself I could be.”

In the weight throw final, senior Jasmine Williams capped her indoor season by earning All-American honors for the second time in her career. Williams finished eighth out of 18 with a throw of 19.10 meters, good enough to break her own school record and earn a spot on the All-American first team.

Junior Ine Mylle was the third Wildcat to compete in Birmingham. Mylle came home fourteenth in the triple jump final with a jump of 11.97 meters.

Mylle said the experience was a good one for her and her fellow teammates.

“Being able to compete on the highest level in the country and seeing all these other good performances and athletes compete and that you look up to, but then you realize you’re one of them,” Mylle said.

It was a good experience for Head Coach Jenny Ryan as well, calling the trip a success and commend her three competitors.

“All three of them moved up from where they were ranked going in and to come back with two All-Americans was definitely exciting,” Ryan said. “They all performed so well. The entire experience was great.”

Ryan called the entire indoor season a success as the team prepares for the upcoming outdoor season opener in two weeks.

“I was really happy and really impressed with how the kids competed all year,” Ryan said. “We had great results and kept breaking records; they definitely stepped up from where we thought they would be.”

Mylle also said the indoor season is great prep for the outdoor season which she believes is more of a challenge.

“Indoor season is more of a preparation period for me,” Mylle said. “When I go home in the summer all I do is compete outdoors so it’s a longer and more challenging season for me.”

Burmeister said both the indoor and outdoor seasons have their own entities.

“I enjoy indoor because there is no variability in the conditions and you can always count on being able to run a strong, consistent race,” Burmeister said. “I’m excited for outdoor as well because the weather is nice and I am able to run the 10k.”

Up next for the Wildcats is the Raleigh Relays, the outdoor track & field season opener held in Charlotte, North Carolina March 24-25.

“It’s a high-level meet with a lot of division one schools and they have standards for teams to qualify for the meet,” Ryan said.

The Wildcats will travel to Charlotte with just seven athletes, but Ryan believes it’s good for the team going forward.

“It’s important for those kids to get a jump on the season and get some good competition right away,” Ryan said. “When you go up against some of that high level competition, it helps pull you up even farther.”