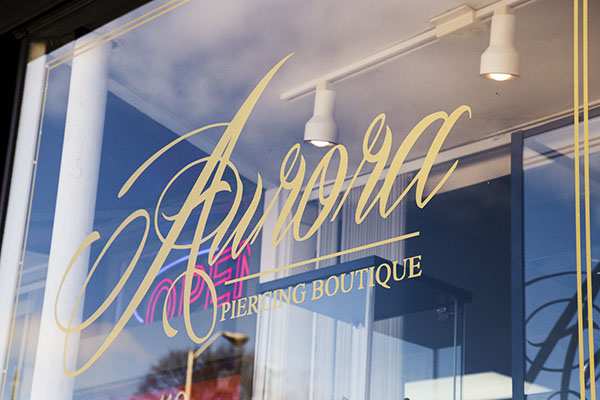 A new boutique focused solely on piercing opened its doors to the 906 on March 8. Aurora Piercing Boutique now offers the only certified Association of Professional Piercers (AAP) studio in Marquette and is one of the few in the Upper Peninsula.

Originally located inside Rendezvous Tattoo & Body Piercing, Aurora was able to gain its own storefront on North 3rd Street.

Owner of Aurora Piercing Boutique Chris Gonyou said having his own piercing business has always been a dream of his.

“It was pretty much just a ‘when?’ situation. So I had worked in town at a couple different shops for a while and I found a good opportunity to move so I did,” Gonyou said.

Gonyou formerly attended NMU seeking a writing degree and then went into the environmental sciences program; he soon decided piercing was what he was meant to pursue. He gained experience learning from piercers throughout the state and moved back to Marquette following his apprenticeship. He’s now been piercing for just under six years.

“It’s one of those things where if you try to leave Marquette it’ll always somehow suck you back in, but I also really like it here. I love the people,” Gonyou said. “You don’t get people like that from anywhere else in my experience…and we didn’t have a studio that offered real high-end piercing.”

Body piercing was typically a side job of tattoo shops where tattoo artists pierced during down times for extra money, but not many specialized in it, Gonyou said.

“I wanted to bring that up here. I get to make sure that everything goes perfect for a piercing and not perfect for tattoos, piercings and whatever else is going on,” he said. “I like having a little bit more space and I like the main goal of the building just to be—to give out really good piercings with nice jewelry.”

Jewelry carried by Aurora largely comes from the companies ANATOMETAL and NeoMetal, but all the jewelry they carry is made in the United States and comes with a lifetime guarantee. Part of being AAP certified is carrying high-quality jewelry.

AAP membership holds piercers to specific standards. Piercers must show their autoclave—a steam sterilizer for piercing tools is one meant for the body art industry and is spore-tested, meaning it functions properly. Aurora spore-checks four times more often than needed in Michigan just to be safe.

Being certified and having safe practices in body art doesn’t necessarily benefit the boutique but it benefits the community Gonyou said.

“There’s two reasons: one, I think that people should hold body artists to a higher regard. People should expect more from them…Two, the reason we think that it’s important is because there are a lot of health risks to body art and it can be something simple, like a piercer making sure angles are perfect so it will heal fairly well or making sure that they aren’t using non-sterile equipment or worse,” he said.

Aurora uses different methods of outreach such as bringing outside piercers into the boutique, doing talks on campus and giving out as much information as possible, even to those who aren’t necessarily looking to get pierced, but have questions or are curious about body art, Ganyou said.

Meeting people and finding out their reasoning behind wanting to get a piercing is Gonyou’s favorite part of the job, he said.

“I got into this because I like self-expression and I like pushing boundaries and everything. A lot of people want to express themselves in some way or take a part of their life into their own hands and [piercing’s] one of the ways to do it.”

Gonyou is happy with the way the first couple weeks of business have gone and is confident in Aurora’s growth, he said.

“I didn’t necessarily plan on getting to this point even, I think it kind of just happens. The one thing I know about myself is that I always feel like I can make stuff better than it was before and I’m going to continue to do that,” Gonyou said. “I don’t know how yet though, it’s too soon, but I’m sure in about six months I’ll be posting about another crazy thing on Facebook that I’m doing differently or changing.”