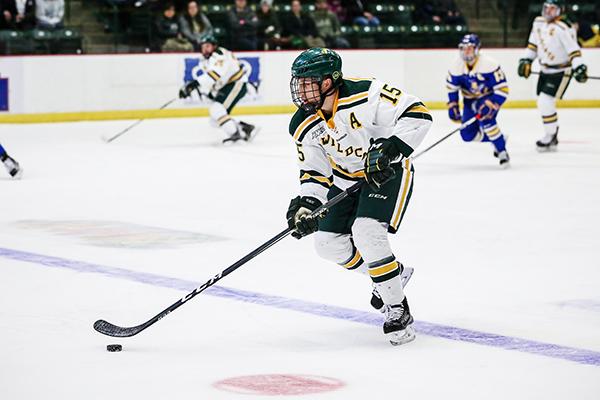 Less than three weeks ago senior forward Dominik Shine scored the final goal in the playoff game against Bemidji State University that forced a third game in the series; today he skates at Van Andel Arena as a professional hockey player with the Grand Rapids Griffins, the American Hockey League Affiliate of the Detroit Red Wings.

Shine finished his career at NMU at 97 points, with 48 goals and 49 assists. During his senior season, the alternate captain was the first Wildcat in a decade to net 20 goals in a single season.

In the Wildcats’ final game of the series against Bemidji State Shine played what would be his final game with his teammates.

“That feeling of never getting to suit up with those guys again was pretty sad,” Shine said. “I just really enjoyed my time there.”

He said he made a lot of great friends at NMU that he’ll miss as he moves forward.

Shine becomes the second former Wildcat in the Red Wings organization, joining former NMU goalie Jared Coreau. Shine said he and Coreau played together during his first year in junior hockey with the Lincoln Stars, when Coreau was in his final season with the Stars.

“When I came to school he had just left,” Shine said. “It’s great having him. We went out to dinner, it’s really nice.”

Shine is a native of Pinckney, Michigan, a small village outside of Detroit, so being a part of the Red Wings organization is extra special to him.

Shine has one year guaranteed with the Griffins but he hopes to sign an NHL contract after that. His goal in the near future would be playing with an NHL team.

Coming from college hockey Shine said he immediately noticed the faster pace of the game. He said guys are a lot older and stronger than he’s used to.

Shine reported to the Griffins on Tuesday, March 22. He came onto the team just as the Griffins finished a 15-day road trip. He said practices have been light and short.

“For me it’s just been watching the games, trying to get used to the systems and stuff like that,” Shine said.

For Saturday night’s game against the Chicago Wolves Shine warmed up with the team. Forward for the Griffins Tomas Nosek had been called up to the Red Wings and they were unsure if he would make it back in time for the game.

“He ended up getting back so I didn’t play,” he said. “I’m not really sure when I’ll play, I’m just waiting around for my turn and just keep working.”

Being a leading scorer on the team and a senior, Shine was seen as a leader at NMU. He said it’s been an interesting transition to being a rookie again.

“They have the guys in the locker room who they look up to,” Shine said. “I just have to play my part and do the best I can while I’m here.”

Even with being the rookie, Shine said the players have made him feel at home on the team.

“It’s really good, the guys here have been great,” he said. “They’ve really welcomed me. We have a really close team, that’s why we’re having success.”

He isn’t exactly sure what his role on the team will be, but he’s prepared to be flexible with where the coach puts him. His focus now is next season.

“I’m not even sure how many games I’ll get this year,” Shine said. “My goal right now is to just focus on next year and use this year to just get my feet wet.”