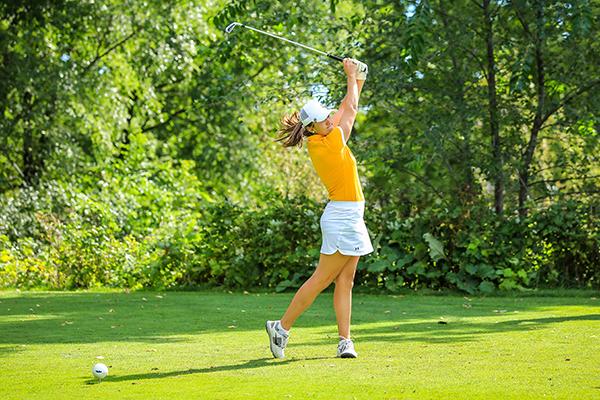 Golf season is back in full swing once again. The Northern Michigan University Women’s Golf team had time to regroup  as they look to improve after a last-place finish at the Jackrabbit Invitational at the Siena Golf Club in Las Vegas, Nevada last month. The three-round event fielded seven teams with South Dakota State University being the host.

This tournament was the first spring event of the season for the golf team, as their lone victory of the year came at the Wildcat Invitational in Marquette back on September 10-11, 2016. According to interim head coach Robert Bastian they have added a tournament this weekend.

Bastian took over as head coach for both the men’s and women’s teams last fall, as Kyle Wittenbach left for Ferris State University for the same position. Bastian said that by taking over he can build momentum from what they had from the fall.

“I just try to work off what we built from last year with it being the second year of the women’s program,” Bastian said. “We’re still a relatively young program, but we just take it one day at a time.”

“They’re all great young kids, which makes my job a little easier,” Bastian added. “It’s also a bit of a learning experience for us too.”

From the invitational, only two from NMU finished in the top half of the tournament field. In her first invite as a Wildcat, South Africa native freshman Caro Els tied for 16th place. Junior Haley Hewer finished one stroke behind Els placing 18th. Overall as a team NMU shot a 953, finishing seventh. They were the only Division II team in the event.

Bastian said the tournament was similar for Els to playing in her home country.

“Playing in Las Vegas was similar to being back home, with the landscape and the weather, to where she’s from,” Bastian said. “She seems to really like it up here; obviously different weather but she’s getting acclimated with it and fitting in really well with the team.”

South Dakota State University won the overall championship with a score of 890, with one of the Jackrabbits’ players, Teresa Toscano, hitting the lowest score of 212.

Bastian said the tournament was difficult, but the Division I experience can teach them about the team’s strengths down the road.

“There [were] six teams that were in Division I, and we were the only the Division II school competing,” Bastian said. “So, we saw a lot of good competition there.”

As they continue going through the spring golf season, Bastian is optimistic that they can make some competition with the rival teams, especially with an added invitational this weekend.

“We see about 28 teams, all of them within our region,” Bastian said. “It’s a good chance to compete against them, especially where we are seeded.”

The next tournament for both men’s and women’s teams is at the GLIAC South Invitational this weekend at the University Club of Kentucky in Lexington, Kentucky.