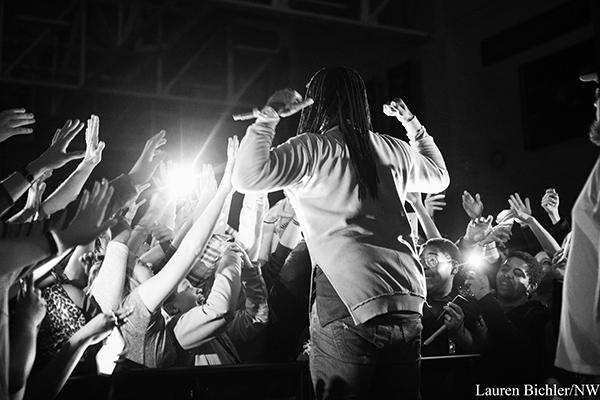 In the middle of a high-energy, sweat-covered crowd of young adults is where Waka Flocka Flame comes to life.  At 8 p.m. Thursday, March 23, Northern Arts & Entertainment brought Waka to the stage of the Vandament Arena.

The opening act, Milwaukee hip-hop artist Mike Regal, started off with a high-energy performance that got the Vandament hopping. Regal and a few of his team members danced around the stage and ended by thanking the crowd for their energy.

Performing songs off Regal’s new album, “Premonitions,” the rapper played his laid-back tracks like “One Way” and “Keep Smoking” which the crowd received well. Regal’s stage presence was hype for an up-and-coming artist. He had everyone chanting “Waka Flocka” as they waited for the renowned rapper to take the stage.

Waka hit the ground running. He sprinted out from behind the gym doors and up onto the stage screaming as the bass shook the floor behind his microphone. He came right to the front of the stage, towering over the crowd with his 6 foot 4 inch build. He scanned the group, his dreads falling behind his head and shoulders like a lion’s mane. The audience’s hands reached out in attempts to touch his tattoo covered skin.

The beat dropped and Waka jumped around yelling a few words here and there on top of his pre recorded tracks. Chants of “Brick Squad,” his record label, were yelled back and forth between Waka and the crowd throughout his set. Waka rapped over his songs, yelling every few words with wild enthusiasm. His voice roared through the microphone. The veins in his neck pulsated as he rapped along to a set list with songs ranging from his debut album “Flockaveli” in 2010 to his more recent work.

A mixture of his old trap anthems like “Hard in the Paint” and “O Let’s Do It” still hold the mean energy and attitude they did as when they came out nearly a decade ago. He also performed his more recent singles “Slippin” and “Workin” that hit hard and with a more aggressive vibe taking the crowd back to his trap roots.

His set also infused his new EDM sort of style into the show. Waka hit the stage with more dance and turn-up music rather than his traditional drug dealing and hustling rap for part of the show.

The self-proclaimed “Turn Up God” was in his zone Thursday evening. The rapper who claimed to be “someone who can’t rap, making money off rapping” is not noted for his lyrical abilities, but more adored for his loud, brash, unapologetic persona that jumps through the speakers and literally off the stage.

Midway through the performance Waka said, “I just want to party with y’all,” before jumping into the throng of people and making his way to the back and front of the crowd shaking hands, jumping up and down and moshing, all while still rapping to the beat. His face held a huge smile as he yelled every few words of his lyrics as fans’ hands reached out in attempt to touch the rapper.

The word “emcee” in the hip-hop world has an original meaning of Master of Ceremonies, and in that sense, Waka Flocka is a true emcee. Waka controlled the crowd as a conductor instructs an orchestra. Besides a few fights here and there amongst concertgoers, the crowd was very involved in the show. Waka was playful but respectful to the security at the show, even putting on a security guard’s hat during his performance. He also thanked the police and the security that attended the event to make sure it was a safe environment to have fun.

“He [Waka] can come back and party with us anytime,” Jake Polich, a freshman construction management major said after the show concluded. Energy ran high even as the concert came to an end; everyone was hopeful Waka would come back out for an encore. The crowd slowly dispersed as friends regrouped after the controlled chaos subsided.

“Most lit concert I’ve been to up here [Upper Michigan],” said Derrick Granger, a Marquette resident who attended the concert with his fiancée.

Waka Flocka Flame left Marquette and NMU wanting more after a wild and exhilarating Thursday night at the Vandament. He fed off the crowd’s energy, and vice versa.

The show wasn’t an exhibit of musical talent, but it made for a great performance and night regardless. He ended the show teasing the audience he’d see them at the after party at the 906 Sports Bar and Grill. Although Waka never appeared at the bar, the night was kept alive with a great atmosphere and lively performances by Mic Kellogg and Mike Regal. They kept the 906 bouncing until bar close.