DIG into some grub at the new gastro-pub 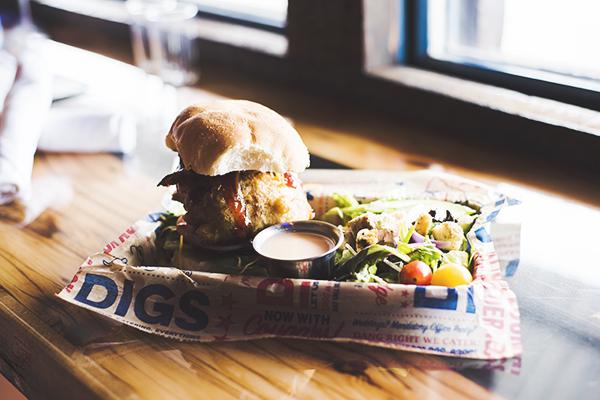 DIGS is the one of the new upper level establishments in Marquette. They are a Gastro-pub, serving a variety of beer, wine and signature cocktails, as well as an expansive menu featuring many uniquely elevated dishes.

The renovation they’ve done at DIGS is huge. The old layout had the bar going almost directly through the center of the room making the area behind the bar a sort of dead space. The bar is moved back against the wall to free up more room for seating; it definitely gives a more open feel to the whole pub, which is a nice change.

They are going for a rustic feel with lots of wood, including a large wooden bar and two wooden pillars supporting the bar that feature hand-carved wooden faces. The inside is lit with warm white lights and blue LED’s for accent. It really provides a cozy atmosphere where you want to sip on a few drinks and enjoy an exquisite meal.

We seated ourselves and the server showed up promptly to take our drink order. The waitress recommended the “Salty Dog” which is made with Tito’s vodka, fresh grapefruit, lemon and lime juices and a salted rim. The drink is their most popular cocktail, so of course I had to get it. Several people also recommended the “Shrimp Barbie” appetizer, which is three skewered cajun grilled shrimp, smoked tomato beurre blanc and parmesan polenta cakes.

My drink showed up within minutes. It was quite refreshing and incredibly smooth. I actually had time to finish my drink and order a second drink before the appetizer showed up, 20 minutes later.

Although the timing was off, it was a very well composed dish that was beautifully presented. I expected a bit larger portion but I was not unhappy with the size of the appetizer. The polenta cakes and smoked tomato beurre blanc alongside the shrimp filled the plate well.

The flavors of this dish were everything I was looking for; savory and spicy with the shrimp, crunchy with the fried polenta cakes, unexpectedly smokey with the tomato beurre blanc, and all of it atop a creamy, decadent sauce. You can tell time went into perfecting this recipe.

For my entree, I wanted to try one of their specialties, “The Eisenhower.” It’s one third of a pound of beef battered in black ale breading and deep fried. DIGS tops the burger with bacon, soda pop BBQ (an in house special sauce), shredded cheddar, romaine, tomato and raw onion.

The food showed up shortly after the appetizer plate was picked up but the waitress left immediately after setting down my burger. I didn’t get time to ask for a refill of water or ketchup and mustard, and I feel those things are essential to any burger and fries meal.

I waited several minutes for no return from our waitress and finally asked a different waitress if I could get what I needed. The bar was quite steady for a Tuesday night, with not many seats left open. Even when busy, waitstaffs should check up on the customers when the plate hits the table.

The first few bites of this burger are unlike any burger you’ve had before. The black ale batter encapsules the burger, keeping the moisture in and allowing for the crispy outer layer. The batter almost reminds me of a corndog with its slightly sweet hints. The only downfall of this burger was its small sprinkle of cheese. A little bit more would have really brought the dish together. This dish has so much potential, and it is a creative spin on one of the most common foods. Overall it was a heavy meal in the end, but with this burger’s flavor I would order it again.

All-in-all, I was overly pleased with my meal. I thought the food was delicious and unique. The timing on the appetizer could be improved and the front of house staff could check up on the tables more often. But overall I have no major complaints and I think DIGS is way ahead in the restaurant scene.