Eco-friendly fashion flaunts for a message 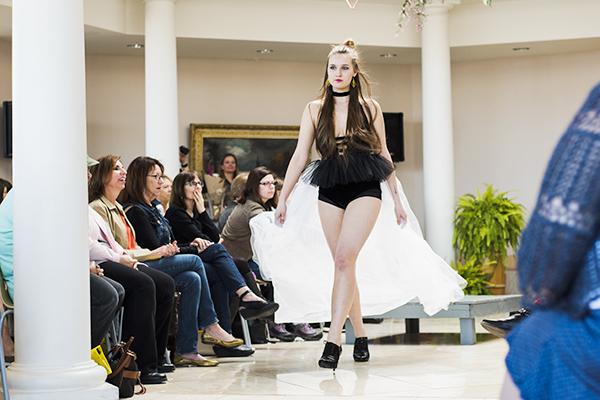 The (re)Design Fashion Show is the largest gathering of artists who create upcycled artwork in the Upper Peninsula, focusing on eco-friendly and sustainable fashions created with salvaged or second-hand fabrics and materials.

Ehle is an environmental studies and sustainability major at NMU, and has a passion for redesign and sustainable fashion practices.

Her line tells the story of the cotton industry. Right now, 80 percent of the cotton worn is GMO and is RoundUp-Ready, meaning that it is resistant to harmful pesticides. The use of pesticides isn’t good for the communities that grow cotton, the land or the consumer, Ehle said.

“The fashion industry is the second most polluting industry in the world, after oil,” Ehle said.

“I wanted this line, and my lines in the future, to portray all of the environmental injustices that the fashion industry causes.”

Her line started out with the first model wearing all white, and slowly progressed by adding black accents until the last model was wearing all black. Ehle wanted this to provide a visual to the audience of to show that the fashion industry has a dark and unclean side.

All in all, Ehle said that it took eight weeks to create her spring line for her brand, Terra & Taylor.

“The celebration is my favorite part,” Ehle said. “This show made it all worth it.”

Megan Hillier, a junior graphic communications student at NMU was one of the models for Ehle. They went to high school together, and when Ehle approached her about being a part of the show, she jumped at the opportunity.

“It was awesome. It was a very glam day. It was really fun,” Hillier said. “I’ve never had a day like this before.”

Hillier was the only plus-sized model in the show and Ehle made it a priority to show fashion is for everyone. She was also intrigued by the premise of the line and the core principle of the event: 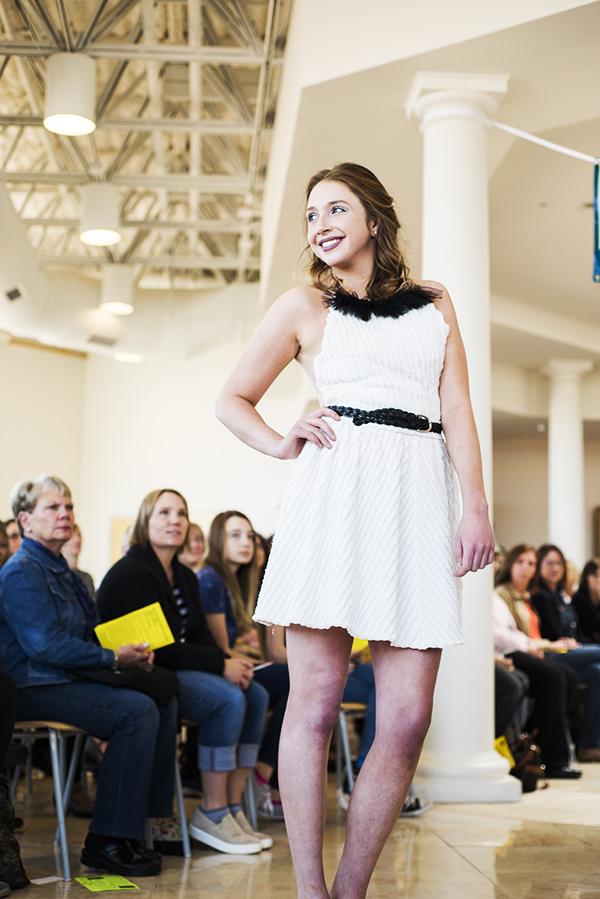 thinking outside the box and being more sustainable with fashion.

“I think this is a really great event because it focuses on the eco-friendly side of fashion, and not fast fashion which is becoming more and more of an issue.”

An open design contest followed the show and allowed four new designers the opportunity to showcase their take on redesigned fashion. The winner of the contest received prizes, but most importantly will be one of the featured designers in next year’s show. The audience voted for Lumi, a collaboration between two sisters, Mandy Swanson and Michelle Walters.

Swanson, an NMU graduate, said the sisters have been sewing and making redesigned fashion since they were kids.

But about a year and a half ago, while the sisters were on a long car ride reminiscing about the brands they shopped on a recent trip to Cape Cod, they decided to try and create a clothing brand here in the U.P. The name Lumi is the Finnish word for snow, tying U.P. heritage to the brand even further.

“It’s a very beautiful place that we live, and we don’t have a clothing line that symbolizes what the U.P. is really about,” Swanson said.

So they’ve brought together their decades of sewing experience and inspiration from the U.P. to create a comfortable and classic design to traverse the seasons. They are currently in the “research and development stage,” trying out patterns they drafted themselves and getting feedback from trusted friends and family.

While they may not be able to take their redesign skills to their clothing brand, the sisters have committed to using only sustainably produced and ethically sourced materials that use Earth-friendly dyes. Rita Hodgins, who attends the show every year was blown away by the quality of this years designs.

“It was fabulous,” Hodgins said. “The garments that were shown from the previous winners were lovely and unique.”

Hodgins said her favorite part of the day was the competition, and she was just so impressed by the contestants.

“For them to have to use recycled garments, and the outstanding job they did, that was so exciting,” Hodgins said. “I’m so happy for them.”