The Northern Michigan Track & Field team dominated the competition for the second week in a row, winning 12 of 19 events at the Bulldog Invitational on the campus of Ferris State University in Big Rapids, Michigan.

Senior Avadon James paced the field in the 100-meter and 200-meter runs edging Ferris State sophomore Sarah Utchel by a narrow margin in both events. 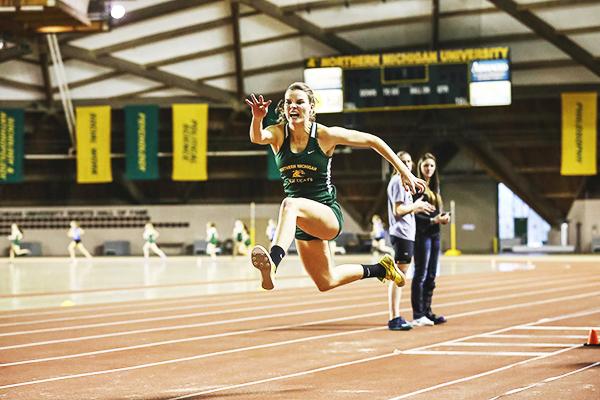 Senior Jasmine Williams was the fourth Wildcat to win two events, sweeping the hammer and discus throws. Senior teammate Samanthia Johnson finished second in the discus and third in the hammer throw.

Head coach Jenny Ryan was once again satisfied with her team’s performance.

“It was definitely a great trip for the team and exciting to win a lot of those events,” Ryan said.

“Some of the times weren’t our best, but we’re training hard right now and I’m happy with the efforts of the athletes in their respective events. I’m happy with the team overall and how hard they’re working and how well they’re doing as a group.”

In the 100-meter relay, the team of James, freshman Abby Christmas, sophomore Jenna Long and freshman Sydney McPeters finished in first-place out of the four teams competing. The Wildcats clocked in at 48.75 seconds with Davenport University coming in right behind at 49.83.

Nine teams competed in the 400-meter relay and the Wildcats were dominant again with the team of McPeters, Becker, and sophomores Lynsey Collins and Shayla Huebner with a time of 3:59.52, beating out second-place Davenport by over 11 seconds. Ferris State completed the podium with a time of 4:20.95.

Huebner won the 400-meter run with a time of 57.40 topping Saginaw Valley freshman Morgan Fuerst by over one second. Sophomore Paige Dutcher completed the podium for the Wildcats with a time of 59.01. Collins finished ninth in this event.

“It went great,” Smith said. “I started off conservative like I always do in the beginning of a race and then I kept on pushing. I made sure I didn’t stay too far behind the first group.”

Hanna Torvi took ninth in the same event and admitted to stretching her comfort zone a little.

“I normally run steeplechase so it was interesting doing an open 3K but it was fun,” Torvi said.

Up next for the Wildcats is the St. Norbert College Twilight in De Pere, Wisconsin today, April 13. The Wildcats will travel there and back in one day.

Ryan says while this meet is another small one, the competition is just as strong.

Ryan doesn’t downplay the small meets by any means, stating that they’re good preparation for conference championships in the coming weeks.

“Since it is a smaller meet it’s another chance to see where everybody is at and see what we can do,” Ryan said. “Hopefully we keep moving up our results and the big thing is preparing for conference championships.”