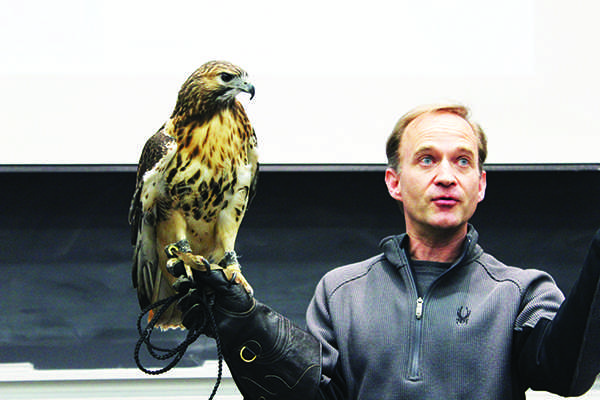 Nature at Northern spread its wings Saturday on campus to celebrate birds of prey, reptiles and amphibians. The event raised awareness about wildlife conservation and featured an assortment of live turtles and a special guest for the finale—a hawk named Sierra.

The event, which took place from 10 a.m. to 2 p.m. in West Science room 2904, was organized by the NMU Fisheries and Wildlife Association and sponsored by the Student Finance Committee. About 25 people attended in total. The event consisted of three presentations—the first on North American birds of prey, the second on turtles and the last on frogs and toads.

“This event is an important way to reach out to people who don’t experience this kind of thing, like the animals,” said NMU Fisheries and Wildlife Association President Douglas Hardy. “Plus, there’s tips to help animals in need. It’s good because up here we have so much nature all around us and people who want to help,” the senior fisheries and wildlife and communication studies major added.

The speaker for the first presentation was NMU junior biology major Dani Dershem. She explained that birds of prey, also called raptors, are characterized by their hooked beaks, sharp talons and keen eyesight and include hawks, falcons and eagles. She showed 13 different “study skins,” which are preserved, stuffed animal pelts used in many zoology classes. Most of the skins were from a variety of hawk and owl species, as well as an osprey and a kestrel. 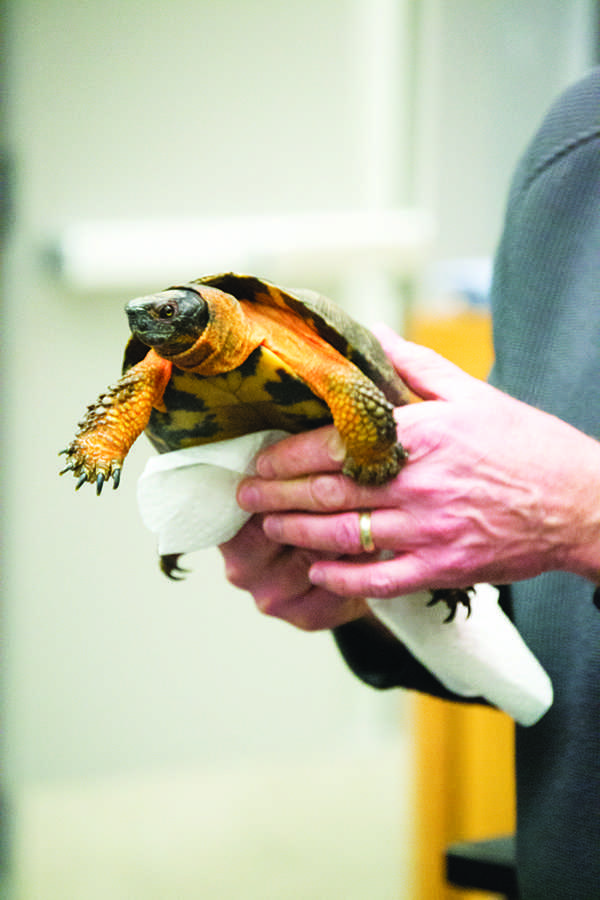 cles, behavior and their endangered status. Most of the birds discussed at the event are classified now as “species of least concern” in regard to their conservation status, however many nest in tree cavities, so their habitats can be threatened by deforestation.

With plenty of dry humor, she also mentioned unique facts about the species: Red-tailed hawks are monogamous and are known to perform a “sky dance” mating pattern of grasping talons midair then free-falling together; Cooper’s hawk males are about the same size as the prey the much larger females usually kill and eat—pigeon sized—so the dude hawks have to be mighty careful when approaching their ladies; northern saw-whet owls are so tiny that one mouse can be dinner and leftovers; and American kestrels hunt by tracking the ultraviolet urine trails of their rodent prey, she said.

“The American kestrel is probably my favorite to see live in the wild,” Dershem said.

“They’re so colorful, small and sweet for a predator.”

Dershem is a research assistant at the NMU Biology Museum, where she manages the database for the ornithology collection. The museum has seven cabinets of birds, so this presentation was a small representation of that.

“It’s nice to pull out specimens,” Dershem said. “A lot of people don’t even know about the collection. But [the specimens] have so much value. Some schools have got rid of their collections because people forgot about them.”

The next two presentations were led by guest speaker Bart Kotarba of Northwoods Wildlife Center in Minocqua, Wisconsin, where he is director of education and an advanced wildlife rehabilitator. The center is a hospital for

injured wildlife. Animals too domesticated or injured to be released into the wild now tour with Kotarba on his outreach presentations.

As he taught about turtles found in Michigan, Kotarba passed around turtle shells and a piece of a 33 million year old fossil of a tortoise shell. He appreciated turtles for being “amazing survivors,” ever since the time of the dinosaurs.

“You don’t see triceratops anymore, but you do see turtles,” Kotarba said.

He showed a live wood turtle named—what else?—Woody. The turtle species has orange skin and can be found throughout North America, however the species has been in decline in Northern Michigan.

Woody is a feisty 37-year-old omnivore known to “terrorize” employees at the wildlife center, sneaking up on them and biting their shoes.

“I always warn them, but they never listen,” Kotarba commented, shaking his head playfully as Woody opened its jaws every time Kotarba’s waving finger came near.

Kotarba also brought two live three-toed box turtles. Both were brought to the wildlife center as former house pets. He also showed a painted turtle named Hook that was brought to the center 19 years ago with a missing foot and fish-hook in its head.

Next, he presented on 12 frog and toad species, focusing on identifying their mating calls. Most people hear these amphibians and assume their sounds are from birds, he said.

“If you recognize that they’re frogs— that’s a huge step,” he added.

He played a CD with the mating calls. At the end of the lesson, he had the audience imitate the amphibians in a “frog chorus” of the different calls.

“They’re an important part of our world,” Kotarba said of the wildlife. “Many people don’t know about them or even notice they’re there. I want people to learn to appreciate them for what they are as animals—not just as another pet to keep.”

Lastly, he introduced the audience to Sierra, a 15-year-old red tailed hawk, which came to the rehab center with a broken wing from a gunshot. Crippled, the female couldn’t be returned to the wild and now helps Kotarba raise awareness about conservation.