NMU English professor David Wood’s passion for undergraduate education has earned him the Michigan Distinguished Professor of the Year Award.

The Michigan Association of State Universities will recognize the three recipients of this annual award, given to faculty from Michigan’s 15 public universities for outstanding contributions and dedication to the education of undergraduate students, during an April 21 luncheon in Lansing.

This year the other two winners are professors from Michigan State University and the University of Michigan. 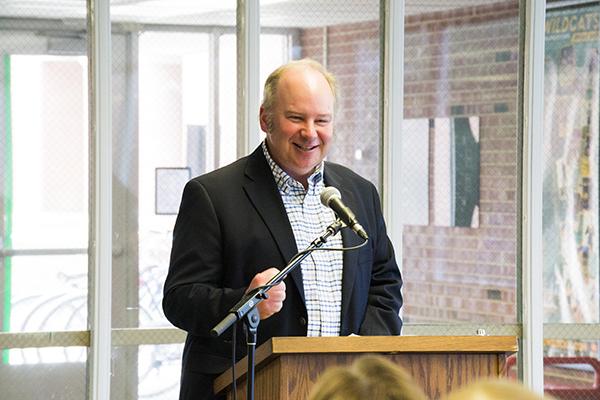 Wood called himself just one of the many NMU professors from all departments doing praiseworthy work helping “bright and talented” Northern students succeed in their studies.

“It’s definitely an honor for me, but it’s a really big deal for Northern because it puts us on the map,” Wood said.

“It’s an important thing for Northern to have a professional identity among these 15 schools, but also one that stresses the teaching that goes on here. [That’s] the focus of this award—the ability to get undergraduates excited about learning. A big chunk of what Northern does well is undergraduate education.”

Wood earned his bachelor’s degree from Skidmore College in 1993, his master’s from the University of Alaska-Fairbanks in 2000, and a Ph.D. from Purdue University in 2004 in English literature.

Wood has taught literature at Northern since 2007. He has also been director of the NMU Honors Program since 2010, for which he is a major fundraiser, seeing that donor money goes to deserving undergrads doing research in many fields of study.

“The access that students get here—to what I call the creation of new knowledge—is just astounding,” Wood commented. “It’s a thrill to watch students thrive and go on to top graduate programs.”

As a Shakespeare scholar and trailblazer into critical analysis of representations of disability in classical literature, Wood brings his insights to the classroom. He regularly teaches introductory and upper level Shakespeare courses, Shakespeare on film, a class devoted to author John Milton, as well as Honors courses on Greek and Roman epics and poetry and also medieval literature.

With his students, Wood tackles complex issues like gender, class, politics and religion with the seriousness and open mind the subjects demand but also with lightheartedness and plenty of “Seinfeld” references.

“He is excited each day in class and always tries to show us why the old stories we tell are important. He connects them to current issues and the various aspects—whether laughable or depressing—of our own lives.”

Wood will lead a study abroad to London this summer and every August he also heads up the Stratford Festival Endowment, which is a fall semester course that brings 10 students to the renowned Shakespeare Festival in Stratford, Ontario.

For students like junior English writing major Elizabeth Fust, the trips can be life-changing.

“[The Stratford Festival] was one of the best experiences of my life,” Fust said. “Now, preparing to go with [Wood] and another group of students to Stratford-upon-Avon and London, I’m so excited for how he’ll challenge me again to see Shakespeare in a different light.”

Wood’s work on disability issues also extends to his humanitarian service as a trustee of the Tyler Rigg Foundation. The goal of this nonprofit is to “do good in the world,” Wood explained, and to honor the memory of Tyler Rigg, a high school friend of Wood’s who died in a car crash at age 24.

This foundation has given grants from $500 to $10,000 to aid many projects, including the Bay Cliff Health Camp in Big Bay, which built a special dock that raises and lowers so that kids can get from their wheelchairs into kayaks.