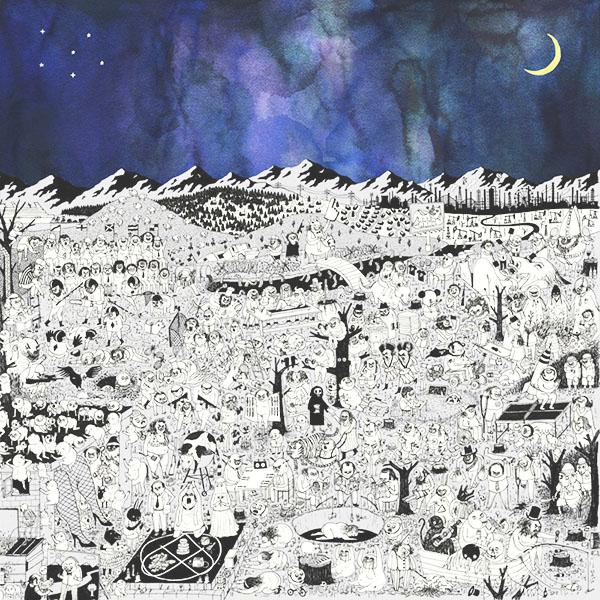 “Pure Comedy” is the third album by Maryland-born folk-rock singer/songwriter Josh Tillman under the stage name Father John Misty. Other than Tillman’s contribution to the staple indie rock band Fleet Foxes’s 2011 masterpiece “Helplessness Blues,” Father John Misty has been his most recognizable project to date.

“Pure Comedy” is the follow-up to the wildly successful sophomore studio album “I Love You, Honeybear” from 2015. Promoting this new album with four explosive singles, a short film of his recording process and an extraordinary couple of Saturday Night Live performances, the anticipation most fans felt for its release was remarkably intense.

Tillman’s approach on his latest Father John Misty effort may have opened more doors for him as an artist and revealed more of his personality, but unfortunately has caused it to fall short of the bar set by “I Love You, Honeybear.”

On his two previous albums, Father John Misty has not been restricted by the singer/songwriter norms we’re used to. Apart from most of his compositions being lyrically dense and accompanied by rich, folksy acoustic guitar and Josh Tillman’s rustic vocals, a Father John Misty song has always been far from run-of-the-mill.

Not only has he been known for blurring the lines between genres but also culture.

Many songs on “I Love You, Honeybear” have been drenched in Latin and early European influences as well as influences from every dusty hub of American folk and indie rock on the map.

However, on “Pure Comedy,” these beloved features have been completely stripped back, restricting the entirety of the album to what seems to be a formula applied to every song in the tracklisting.

Almost every song is limited to string and brass arrangements and either piano or guitar along with Tillman’s vocals.

The high points of the album are when the formula is used to build intensity into beautiful climaxes that emphasize Tillman’s emotional sentiment and bold socio-political statements in his lyrics.

It’s also worth mentioning that none of this album is hard to listen to. The lack of variation between tracks makes it easy to sit back and experience the album as a whole without much thought.

Which is a sonic success for the album, but it’s unfortunate how often one can find themselves disregarding what he’s saying entirely and getting lost in the music. When considering the massive scope and scale of Tillman’s statements being made lyrically throughout it, this is very unfortunate.

Thus the low points of this album are when Tillman sounds like he is rambling for verses on end with little attention being brought to the content of his message. Understanding his intentions as well as I have come to will certainly require multiple listens.

Always known for being satirical and cheeky in his lyrics, Father John Misty is renowned for the clever commentary he makes on modern-day religion, technology, media, government, sexuality, war, pop culture and basically everything else. In “Pure Comedy” Tillman steps up the satire and parody as he exposes the public’s flaws (not even sparing himself) with wit and charm.

In songs “Total Entertainment Forever” and “Ballad of the Dying Man” he hilariously mocks society’s clueless dependence on technology and their constant stream of media. It’s in these tracks that Father John Misty rolls out some of his most memorable satire  in his career in lines like “Bedding Taylor Swift every night inside the Oculus Rift” and “Eventually the dying man takes his final breath.

But first checks his news feed to see what he’s ‘bout to miss.” Tillman even mercilessly tears the music industry that he plays a part in apart for a full 13 minutes on the track “Leaving LA.”

Now, the bold change in song structure may have caused sonic repetitiveness and a decrease in eccentricity from Father John Misty’s last album, but the exploration into this more atmospheric sound has allowed him to compose epic productions such as the singles “Pure Comedy” and “Total Entertainment Forever.”

These songs, with their grand eruptions of brass, strings and Tillman’s most loud and broad vocal performances are what excited me the most about the release of a new album.

I felt this same excitement when listening to “So I’m Growing Old on Magic Mountain,” a somber ode to mortality that strikes lyrical and conceptual resemblance to Neil Young’s “Sugar Mountain,” which along with “In Twenty Years or So” are the only songs that utilize synthesizers in the entire album.

This style is an important step in the right direction for Father John Misty and I hope he continues to push the boundaries of his sass and sarcasm while also refining the huge sound that made the arrival of this new project so intriguing.