An evening inside the wardrobe 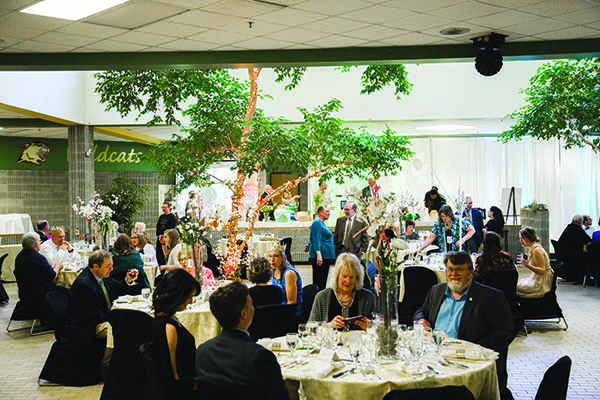 Circular tables draped with white cloths, topped with beautiful arrangements and trees sparkling next to them transformed the NMU Jacobetti Complex as event goers were taken through the wardrobe to the land of Narnia at The Lion, the Witch and the Wardrobe fundraising event Friday, April 14.

“It’s a great way for the community to see what we can put together as the hospitality program,” Johnson said. 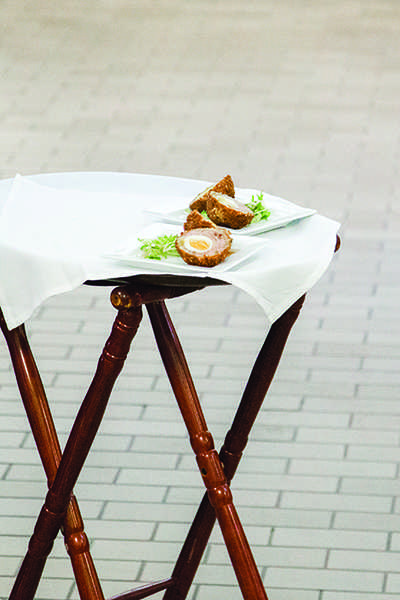 The 75 guests started the night off at 6 p.m. with an hour long opening reception with music provided by Double Trouble DJs. Wines such as merlot and chenin blanc blend were offered at the open bar along with themed specialty drinks like the “Firefly Cock- tail” and the “White Witch Mule.” Guests were able to decorate their own crowns and feel like the kings and queens of Narnia for a night.

Hospitality students floated around the room with trays of hors d’oeuvres while other guests tried out a photo booth with props and learned how to fence from professors from the School of Health and Human Performance.

The White Witch, Mr. Tumnus, Lucy and other main characters from the movie milled around as guests enjoyed the mystical atmosphere. Scenes from “The Lion, The Witch, and The Wardrobe” played across a projection screen in the commons while people participated in the silent auction.

The silent auction started at the beginning of the reception and ran through dinner. Prizes included a tool kit, different gift certificates such as a sightseeing tour, “The Lion, The Witch, and The Wardrobe” event t-shirts, a tote bag and Buffalo Wild Wings sauces. The $3,000 raised from the silent auction and ticket sales will go toward the student scholarship, said Tamara Hunter, junior hospitality major and banquet manager.

Many of the guests that attended the fundraiser had ties to someone in the program or knew someone who had once been a part of the program and this event. Karen Taras had a daughter in the class last year that helped produce the event as a part of NMU’s hospitality program and decided to at- tend the event again this year.

“I thought it was a worthy cause, cause it goes toward scholarships,” Taras said.

At 7 p.m. guests were whisked away to their seats for a meal fit for any king or queen of Narnia. The meal started with an appetizer of a scotch egg and was paired with garnacha-a red wine grape. A quinoa, apricot and arugula salad came next. The entrée was a burgundy braised short rib paired with syrah. Dinner was followed by an orange marmalade roll with candied grapefruit peels and mini Turkish De- lights and paired with a riesling wine.

During dinner, a short fencing tournament was put on by professors in the spirit of Narnia. Readings from “The Lion, The Witch, and The Wardrobe” also took place during dinner with the chapter that acted as the inspiration for this event was summarized. Particular scenes such as when Lucy sees Narnia for the first time and meets Mr. Tumnus as well as when Edmund meets the White Witch were acted out by members of the Vista Theatre, Marquette Theatre and NMU’s theatre department.

Three raffles were held during dessert including the auctioning off of chef Nathan Moleskin and a few students to cater a ten-person dinner at the winner’s house. Overall, Hunter said the event went well. She said that she had a great team who helped with the fundraiser.

“This is our first big event and we’re getting everything together and we’re students, so it’s new to us,” Hunter said.

Deb Pearce, associate professor of technology and occupational sciences said she thought that the students did a remarkably good job putting on the event, adding that there were a lot of details for the particular theme and they did an excellent job translating it for people who may not know what it is.

“Year after year it’s amazing how creative these students can be and it’s a joy to watch it happen,” Pearce said.