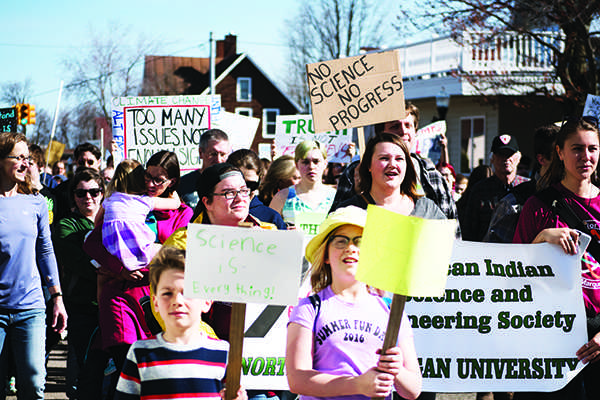 “It’s my Earth,” retired professor Mohey Mowafy said during the March for Science on Third Street Saturday. He said he marched because the planet is important not only for his generation but for future ones as well.

The Marquette March for Science, held April 22 on the 47th annual Earth Day as a sister march to the Washington D.C. event, called for the continuation of publicly funded scientific research. Armed with signs displaying messages like “no science, no life,” about 400 community members, NMU professors and students marched nearly a mile down Third Street with a police escort, ending at the Post Office on the corner of Third and Washington streets where the event concluded with a rally.

Attendees chanted, “Stand up for truth, stand up for reason, scientific facts are always in season,” during the rally, cheering and waving their signs as cars drove by at around 11 a.m.

The event was co-organized by the NMU chapters of the American Indian Science and Engineering Society and Gamma Theta Upsilon.

Scott Demel, an associate professor in the department of sociology and anthropology, said his motivation for marching was his fear of losing financial support for the sciences and the arts, saying they are critical to the nation and to future generations.

“If we lose those, we lose everything,” Demel said.

Martin Reinhardt and Jud Sojourn, two Native American Studies professors, along with other Native American community members, rang off the start of the rally by playing a morning thunder drum.

Reinhardt spoke later during the rally about the importance of protecting the Earth. Other speakers included Jen Hill, education program manager at the Superior Watershed Partnership, and Patrick Brown, an NMU biology professor.

Baldini, while chairman of the joint commission helped manage the Great Lakes shared by the two countries. He said he participated in Saturday’s march to fight back against the proposed financial cuts by the Trump administration to departments aimed at fighting the advancement of climate change.

“You could almost say it’s an anti-intellectual attack. ‘Oh we don’t need this,’ well yes we do,” Baldini said.

Nate Frischkorn, a senior sociology and environmental studies major, was one of the student workers who helped organize the event. He said historically the issue of environmentalism was bipartisan, mentioning that The Clean Air Act of 1970 passed unanimously in the Senate.

Senior biology major Zach Dykema said he had planned to attend the march in Washington, D.C., but plans fell through so he attended the sister march with friends from the biology department.

“I really do see a big need for more awareness and acceptance of science, not so much inquisition and distrust,” Dykema said.

He also spoke of his Christian faith and that he did not believe science and religion were in conflict with each other.

“[God] takes joy in our exploration and when we find things He’s like ‘Oh you get to see a little bit more of the big picture,’” Dykema said.