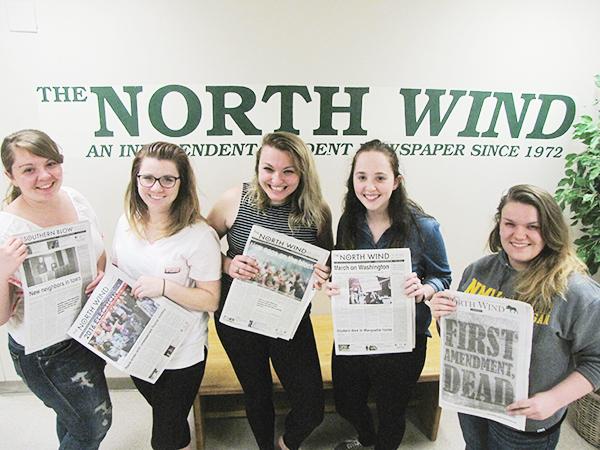 Editor’s note: The following four editors are graduating and leaving their time at The North Wind with personal goodbye columns.

My beginning at the North Wind was a whirlwind. I had spent two weeks as a writer before interviewing for the sports editor position. I knew so little about writing as a journalist and I knew even less about how to manage writers. I only knew one thing going into the position; I loved hockey. The same week I got the job I got a media pass for Detroit Red Wings training camp and my life changed forever. Meeting athletes I had idolized since childhood created an attachment to journalism for me.

I’ve been extremely fortunate throughout my entire life to have a huge support system. My parents have been there for me and supported me with every decision I’ve made, even if that decision came around to bite me in the butt. Thank you Marge and Mike for letting me learn from scraped knees. I love you and appreciate you more than I can express. My siblings have always been there to tease me for my silly choices but pick me up when I truly need it. Thank you Brad, Michael and Brooke.

Ray believed in me when I didn’t even see the potential in myself. Thank you for all your advice and your chirps when the Wings would lose to the Flyers. Some of the best support I had were the writers that listened to my advice when I barely knew what I was talking about. Trevor and Julie kept me sane with their consistent writing through my whole first year.
Thank you Wildcats for giving me something to write about each week and a loyalty that will last a lifetime.

My journey at The North Wind began a few years back as a staff photographer. The position was fairly satellite from the office, and I admit I was always curious and slightly envious of the shenanigans associated with being part of the desk editor crew. Upon becoming the photo editor a year ago, I learned quickly that some of the best support came from the office.

Most of the current editors and some from recent past semesters have become who I identify as some of my best friends. Being the only biology major in the office, AP style was far from my strong point coming in, nor did I know a thing about InDesign (I’m still not your go-to girl for it), but the editorial team happily walked me through all that was new to me.

Working and going to school as a single mom, I was fortunate to have incredibly supportive colleagues that were understanding when I had to run home to a sick child and they acceptingly let him hang out with us during budget meetings. Shoutout to our online editor, Andy, for being the coolest babysitter ever on production nights. I know Ayden appreciates you too.

I owe a lot to my team of photographers as well. Without Neil, Lauren, Jess, Steven, Christin and Lindsey, I wouldn’t have been able to curate successful art weekly.

The newspaper has helped broaden my idea of viable career paths and has helped me gain confidence in my writing abilities as well. I appreciate the vast variety of assignments I’ve worked on, which have led me to riding on the Coast Guard boat, attending more campus and community events, witnessing the Kraft Hockeyville USA NHL up against the glass and meeting Al Roker.
The upcoming lineup of editors has inspiring potential and I know they will carry on The North Wind legacy passionately. Thank you all, my coworkers and friends.

I’ve spent nearly three years at college on staff at The North Wind. I can without a doubt say that it’s defined my NMU experience. While I never changed my major, I’ve explored different options within it. But once I joined the North Wind staff, I found my passion. In 2014, I started as the photo editor. I had no journalism experience and knew little of the behind-the-scenes of our university. Three years later, I’m graduating as the editor-in-chief having led a team of over 15 of my peers in making a newspaper I displayed weekly with pride. I have no regrets about my NMU experience, and this I credit to my professors and co-workers.

The newspaper has given me amazing experiences, from a swim in Lake Superior with Marquette’s finest Coast Guard officers to meetings with community leaders and top NMU administrators. My co-workers have become my closest friends and our office has become a second home, including ancient furniture, weekly Jimmy Johns deliveries and so much junk food.

Thank you to Jackie, my advisor, friend and mentor. She has taught me what I know about the industry and inspired me to pursue this career, with lots of humor mixed in. Also thank you to Professor Jim McCommons who is the reason I applied to the newspaper. His guidance has shaped the student I am today. Thank you to Professor Christine Lenzen, who knew I’d become a journalist before I did and has always believed in me as a leader and as a woman. I will forever be grateful to these mentors for their role in my time as a Wildcat. I want to encourage the staff I leave behind—keep up the fight toward truth. Pick up those small town newspapers and support the free press. Make it your goal to be a better student, writer and journalist at the end of your time here. Thank you, good bye and stay in touch.

My experience with The North Wind began with the first semester in my freshman year, a long, long time ago. In a time where I was struggling to find my place on campus, I was hired in as a layout editor. I remember vividly the first steps into the office and the first staff I had the pleasure of working with. I didn’t know at the time that this oddly-shaped room in the UC and all these people I would work with would so dominantly shape my experience at NMU.

Over the four years here I worked with three great advisors, five people who commanded as the editor-in-chief, 33 editors across different desks, and tons of writers, contributors to the paper and other folks on campus. I have seen and participated in countless laughing fits, heard hundreds of songs (but mostly “You Get What You Give” by New Radicals), and even seen some tears. There have been ups and downs, good days and bad. There have been low days that I have been truly ashamed to be a North Winder, but those days are very much in the shadows of those that I am proud to say that I have been a part of with this great group of people.

I strongly believe that the number of times my fellow editors have called across the office for emergency InDesign help will worm their way into my dreams once I leave here. That there will be a sudden call to utilize my “wizarding” to make content fit on a page, to figure out why the program is being difficult or just to make something look cool.
To every single one of you that I’ve worked with, even if production nights dipped late into the evening, or expletives were yelled, or things were thrown clear across the room into someone’s face, you all have a special place in my heart. You all have made my college experience into something really, really great.