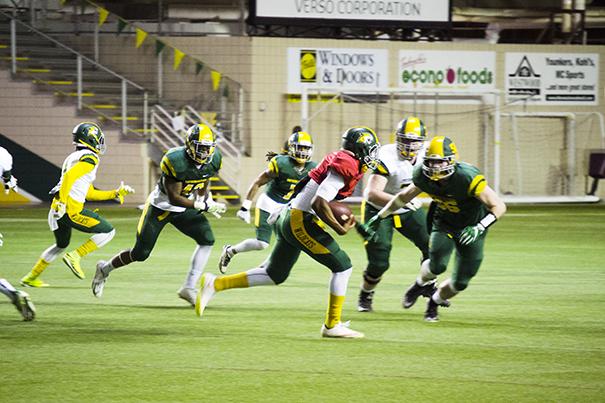 Kyle Nystrom was announced as the 22nd head coach of the Northern Michigan football program on December 20, 2016. Now, with the 2017 season around the corner, the newly appointed coach said he wants to see major changes in the program, not only athletically but academically and socially describing the transition process as “starting from scratch.”

“My impression was that they weren’t the Northern football program that I grew up around or I GA’d for,” Nystrom said reflecting on the team prior to his appointment. “So when I got the job and had my first meeting with them, I was dead set on changing their culture back to what Northern Michigan is—a high effort-type program.”

Nystrom was exposed to Wildcat football as a child growing up in Marquette. When he was in fifth grade, his father Buck Nystrom, who is now serving the team as volunteer assistant offensive line coach, was the assistant coach of the 1975 NCAA Division II National Championship Team.

After inheriting a roster of around 92 players, Nystrom said he is now down to roughly 70 after losing some because they did not fit the type of character the new coaching staff is looking for in a student athlete, some of which were lost due to their academic performance. The coach added that himself and his staff put high emphasis on academic performance.

“This is what I tell the staff: They’re college football players the first thing you’ve got to look for is are they college equipped if they are a person that can handle being in upper education,” Nystrom said. “If they’re not, don’t bring them here.”

In order to be a quality football player, one must put forth “effort and toughness” academically, socially and finally athletically, which is what is expected of Northern players, Nystrom said.
Along with improving academic performance, Nystrom also added that he was disappointed with the program’s relationship with the town in the past and said he wants to change that.

The new coach described the Marquette people as hard workers with great integrity and character and said a negative relationship with the community is unwanted.

“I told them: have you ever heard the slogan ‘if you want a friend be a friend’, treat everyone that way,” Nystrom said. “I think we’ve been better there. It’s new and it’s just a short time but I think we’re better. We’re making progress but we’ve talked to [the players] a lot about it.”

Nystrom said that the remaining players in the roster have been working toward his change in culture but there is still progress to be made.

Athletically, Nystrom said that the team is working toward building up their defense and improving their overall technique. “Starting from square one” the team worked on fundamental defensive skills during the spring, something which they haven’t done before, Nystrom said.

“We know who we want to be. We know how to get there and it’s just a matter of doing it,” Nystrom said. “It’s a hard road. This program was not healthy when we inherited it but I knew that from being in this conference for two years. It’s a hard road but that’s okay because all it does is take work.”

Nystrom’s club kicks off the
season against at Angelo State
at 7 p.m. Sept. 9.