Academic programs come and go, Erickson gets raise by BOT 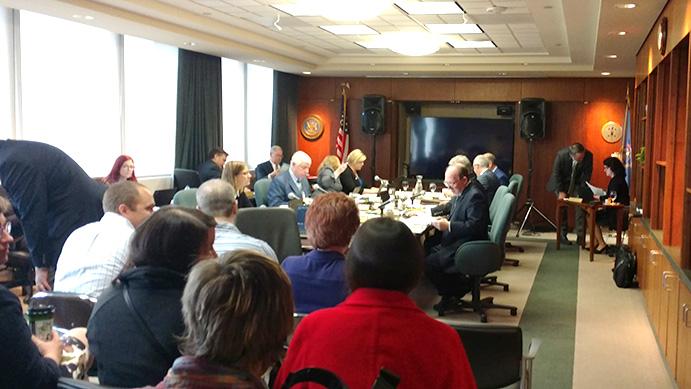 During the end of the semester NMU Board of Trustees Meeting on May 5, the board voted on increases in tuition and an executive committee’s recommendation to amend President Fritz Erickson’s contract.

Vice President for Finance and Administration Gavin Leach said in the meeting that this increase would keep NMU with the second lowest combined tuition and fees of Michigan universities.
“In my estimation, this is a very moderate increase for us,” Leach said.

The recommendation to amend President Fritz Erickson’s contract gained unanimous approval, with several trustees expressing their support for the direction they have seen the university heading.
Erickson’s salary will increase by 5 percent and his contract will be extended by one year, now ending in June of 2020. Erickson’s deferred compensation was increased by $15,000 per year for the first two years, with another $35,000 the final year if Erickson remains at NMU to the end of his contract.

Chair of the board Scott Holman presented the amendment of Erickson’s contract.

“The confidence that the board has in the president and the work he has done in providing a great creative innovation will result in a good transition, a good future for the university,” Holman said.

During the meeting, the board also approved the addition and deletion of academic programs. They approved to add bachelor degrees in applied workplace leadership, embedded systems and anthropology. Associate degrees were approved in paralegal and insurance/risk management as well as certificates in assistant behavior analysis, automotive maintenance and manicure.

Additionally, representatives of ASNMU provided an update on the group’s initiatives including the proposal of a student activity fee referendum. Representatives also asked for the board to consider the formal acknowledgement of Indigenous People’s Day on campus.

“This is a place where sustainability is already part of so much we do,” Thompson said.

Thompson proposed a fully staffed Center for Sustainability after the committee’s thorough assessments of campus showed that many areas of the university were interested in improving sustainability in need of a focused goal and centralized location.

“This would be a physical space with a director coordinator, administrative support to help coordinate all of the various efforts across campus,”
Thompson said.

The expansion of NMU’s Educational Access Network (EAN) to provide broadband to communities across the Upper Peninsula was discussed during the meeting as an example of the universities push to further innovation.

Vice President of Extended Learning and Community Engagement Steve VandenAvond said the EAN will reach areas in the Upper Peninsula with a high need for broadband.

“This hasn’t been done before. This is a game changer.”