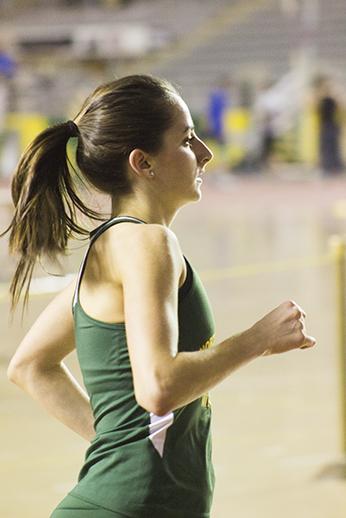 As the school year wound down, six Wildcat women geared up for the Track & Field NCAA Outdoor Championships.

Head coach Jenny Ryan said the atmosphere at the competition was exciting.

“There were teams at the championships from all over the country and so many very talent- ed athletes,” Ryan said. “It was great for the athletes to be there and to experience what it is like to compete at the national level.”

After the team grabbed a fifth place finish at the GLIAC Out- door Championships, six women from the track & field team were chosen to compete in Bradenton, Florida. The three-day competition featured Wildcats in four different events during May 25-27.

Ryan said she’s proud to have six athletes qualify for such a prestigious event and even more proud about how well all of them competed.

Finishing out their career as Wildcats, Ryan said she’ll miss having such great athletes and people on the team.

“They showed the athletes what it takes to be very good,” Ryan said. “They were both very diligent and dedicated in their training and focus on their events.”

This is the fourth time in as many years that the track & field team has had women competing at the national level. Ryan attributes the success of the team to the culture that has been built among the athletes.

“We have built a team culture of hard work, positive attitudes, supportive teammates and also some fun,” she said. “We all en- joy doing what we are doing and excited to see what we all can do. They build off each other’s successes and get excited for each other.”

As the team looks to next season Ryan said building off the momentum that has been built is key to continuing the success.

“Getting more athletes to the NCAA Championships has in- spired the entire team to try and get even more of them there. They all can see that it is possible.