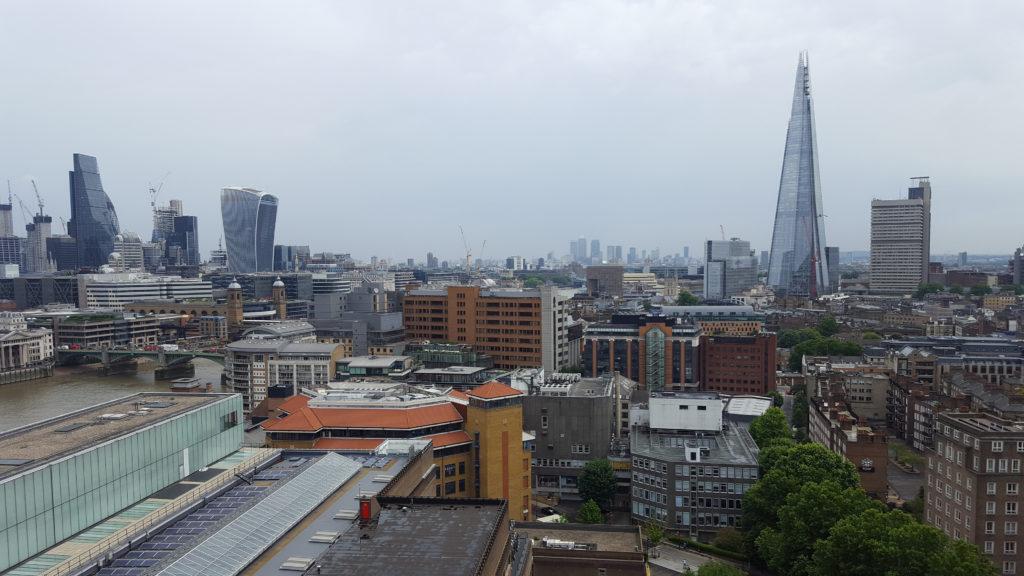 As rain poured on the manor lawn of the hostel and dripped along the windows of the dining room, eight Northern Michi- gan University students and their professor shared a sigh of relief. They had made it to England.

Over the winter semester, these NMU students and professor David Wood were busy preparing to attend a month long faculty led study abroad to Stratford-upon-Avon and London, England. The program included two classes, one through the University of Roehampton, London, and English Renaissance Drama, taught by Wood.

For Wood, a 2017 recipient of the Michigan Distinguished Professor of the Year Award, taking a class to En- gland was a longtime dream.

“Probably the reason I went into higher education in the first place was always the goal of eventually being able to go and take a group of students both to Stratford-upon-Avon and the Royal Shakespeare Company, as well as the Globe Theatre … To bring that stuff alive in Shakespeare’s birthplace or standing before his grave, is one of the most amazing things that I could ever offer the students,” Wood said. 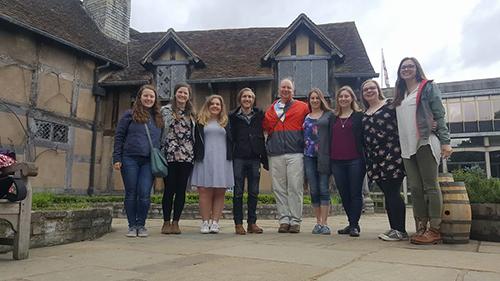 Emily Winnell, a senior English major who has studied Shakespeare in several classes at NMU, agreed with Wood. “It was amazing to be able to actually travel to England and get a more direct Shakespeare experience,” she said. “There’s a huge difference between reading and analyzing Shakespeare here on campus and sitting in the Globe Theatre in the middle of London, watching these stories play out in front of you.”

Stratford-upon-Avon, a small village in central England and home to the playwright William Shakespeare, was the first destination. During this leg of the adventure the class wended its way through cobblestone streets and historic places, from Shakespeare’s resting place to the art deco Royal Shakespeare Company Theatre, where the class saw three plays. The drama experience continued as the class moved to London where Shakespeare’s Globe Theatre became a frequent destination.

On the first night at the Globe after a performance of “Tristan and Yseult,” three NMU students had the honor of meeting the artistic director of Shakespeare’s Globe Theatre, the controversial Emma Rice who will be leaving the Globe due to artistic differences between her and the theater’s board concerning authenticity and her contemporary style.

For many this trip was a dream come true, but it wasn’t without its nightmares. The evening the Northern students gathered in Stratford-upon-Avon was the day after the London Bridge attack.

“It that was unfortunately the defining thing for me with this trip,” Wood explained. “I had this sort of intellectually ideal view of what the trip would be … however, because of the terrorist attacks, the subsequent terrorist attacks and then the fire at the Grenfell building, I think we were all on edge far more than I had expected and so there was a lot more drama in terms of how we lived our lives there.

Despite the tense times in London, students traversed London, other parts in England, and Europe with classes and on their own. Every adventure was unique and won’t be forgotten.

“London is a city of magic,” Ezra Brooks-Planck, a senior English major, commented. “I lived there for three weeks, and in that time, I met an actor who is a knight of the realm, ate at the tavern that stands on the site of the tavern from Geoffrey Chaucer’s “Canterbury Tales,” and leaned on the stage to watch plays at Shakespeare’s Globe Theatre.”

The Knight of the Realm was Sir Ian McKellan, who portrayed Gandalf in “The Lord of the Rings” movie trilogy and who hosts trivia nights at a pub he owns in Limehouse, London. Brooks-Planck attended one night and met McKellan.

“As he passed I drunkenly shouted, ‘Sir Ian, I love everything you’ve done.’ The no-doubt tired Sir Ian walked by, muttered a thank you, and then shook my outstretched hand.”

One memory for Winnell was of the Globe Theatre.

“The whole theater area felt almost magical, and behind it all was the Thames and the London skyline.”

This skyline became familiar to the NMU students and was iconic for Wood.

“Just to walk south on that Queen’s Road across the Southwark Bridge where you just start to glimpse the Globe Theatre on the banks of the Thames is … maybe one of the greatest thrills you can have as someone who has any interest in art, or drama or literature. It just puts your heart in your throat. It all started with this sort of comical looking round building, and the next thing you know you have the most intense exploration of what it means to be a human coming out of a thatched roof building. I mean, how preposterous,” Wood added.