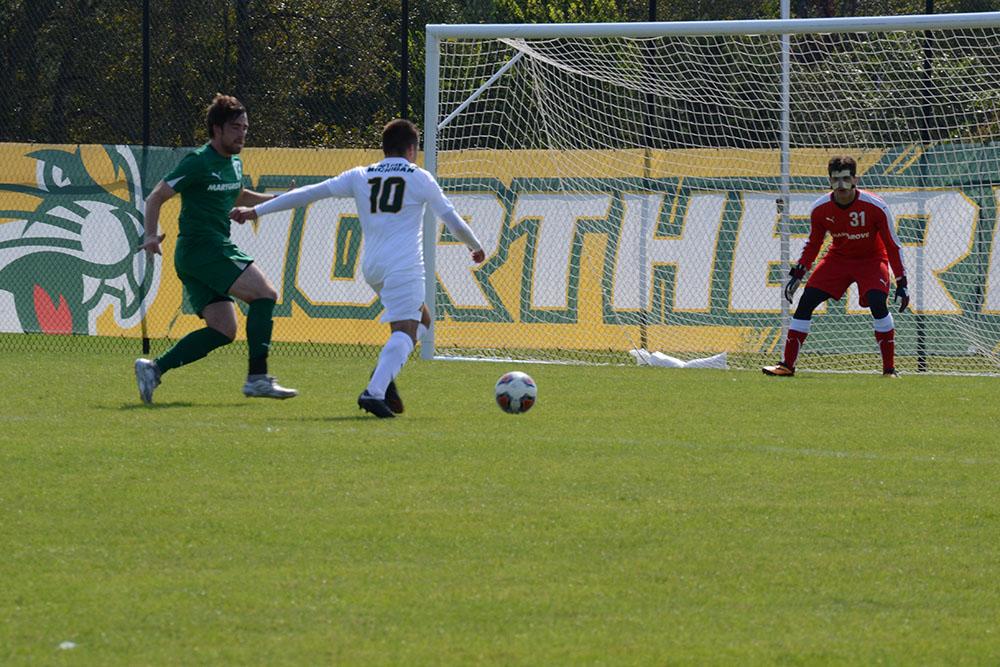 The NMU Men’s Soccer team is coming off of a split weekend with an overtime loss to No. 22-ranked Upper Iowa on Thursday and a win against NAIA school Marygrove on Sunday.

“They were two good games to have for us at this time of year,” he said.

In Thursday’s game, Fausto Ordenana put Upper Iowa on the board at the 17-minute mark with an assist from Italo Martins Soares. That stood as the lone goal in the first half.

The Wildcats countered just 10 minutes into the second half when Sam Popp notched his first goal of the season off of an assist from Nic Harenda to tie the game at one.

All it took was one overtime to find the golden goal. With just two minutes left in the overtime period, Dylan Mientus put the game-winner in over the head of goalkeeper Filippo Torelli to hand the Wildcats a heartbreaker.

Poggi said the result against Upper Iowa was a disappointing one.

“We were a little unlucky in that result,” he said. “We very easily should have won that game and a tie I wouldn’t have been very happy with and it turns out we lose it. The guys played well enough to win and didn’t execute in their goal scoring chances.”

On Sunday, it was a quiet first half until the 44-minute mark when Popp struck just before halftime to earn his second goal of the season and give the Wildcats the 1-0 lead and all the momentum going into the half.

Eleven minutes into the second half, the Wildcats saw a goal from Edgar Astorga to go up 2-0 with Popp assisting on the tally.

At the 72-minute mark, Marygrove’s Christian Wimmer put his team on the board but the Wildcats added another insurance goal from Birkir Baldursson to seal the 3-1 victory.

“Marygrove is a team that’s in a bit of a transition right now so this was a good time to catch them,” Poggi said. “They’re capable of beating anybody in the GLIAC on a given day. We were a little bit sore from the Thursday game so I think we came out with a real determination, and that was something that I was happy to see.”

The Wildcats are now 2-1-1 as the team begins conference play this weekend with home matches against No. 16-ranked Saginaw Valley State  at 4 p.m. on Friday and Northwood on Sunday at 1 p.m.

Poggi said facing SVSU along with Northwood will be a challenge for sure.

“They’re (SVSU) a big team, a mature team, this could be their best team,” he said. “It’s going to be a huge game for us and a huge weekend for us.

Northwood will be fresh because they have an off day on Friday so we’ll take it one game at a time and we’re excited to play against some of the best and that’s what we want to do; we want to become the best so you’ve got to play the best.”