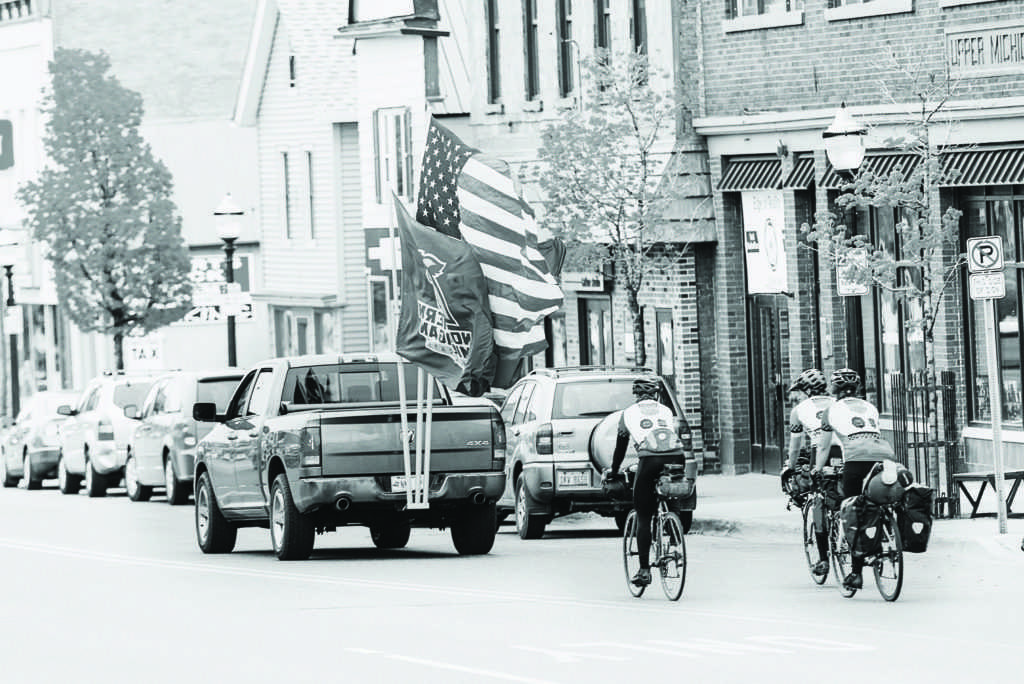 This summer, three NMU students biked around Lake Superior, a 1,400-mile journey through Michigan, Wisconsin, Minnesota and Ontario, in 17 days to interview locals who’ve lived along the shoreline and record for posterity their memories in a mission they called “Great Lakes, Great Stories.”

The students, Dylan Gonda, Olivia Walcott and Ryan Watling, also presented the results of their travels at noon Friday, Sept. 15 to a crowd of about 40 students and faculty in Jamrich room 1318 as the first event of the Northern Climate Network’s Climate at Noon series.

One interview that was especially memorable was in Wawa, Ontario at a roundtable of about 15 to 20 locals, which included members from each ethnic group in town, both First Nation and other Canadians, the young and old, as well as biologists and other experts.

“We spent two hours hearing stories and favorite memories, while watching the sunset over the lake,” Watling, who is a junior neuroscience major, said. “I’ll always remember a quote someone said: ‘We never just sit around and share stories anymore. We discuss politics and work, but we never just share about what’s important to us.’

“So I got to see the immediate impact of how much this meant to a lot of them. I thought, ‘Wow, this is fantastic,’” Watling added. 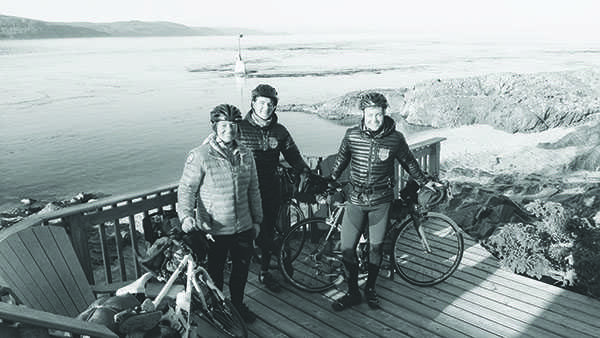 The impact of climate change in the Lake Superior region was a major focus of interviews, especially in rural areas and with people who feel more connected with the environment. The students also learned about cultures in the area, past and present.

Thunder Bay, Ontario, however, with its population of 100,000, had more urban concerns than environmental, like concern over the recent disappearances and alleged murders of young First Nation people.

The students are still going through the process of sorting and editing the numerous hours of audio files, but they hope to release finished stories consistently over the coming months on their website greatlakesgreatstories.org, social media and hopefully, eventually on NPR.

“Patching together each person’s conversation will be interesting,” Watling said.

Before they left, they spent weeks crowd-funding, mapping routes and setting up stops and interviews, as well as exercising to get into better shape for the rigors of the ride. Down Wind Sports, Velodrome Coffee Co. and NMU Marketing and Communications all assisted with preparation.

“Planning is a lot when you’re also a full-time student,” junior environmental science
major Walcott said with a smile.

Walcott’s bike touring knowledge helped in the planning, especially with packing light-weight and minimal impact provisions, along with Gonda’s experience in bike racing. Meanwhile, Watling didn’t even own a bike when they first started planning, he said with a laugh.

Unlike Walcott with her bike’s carrying racks, Watling and Gonda had to “jerry-rig” cargo onto their bikes with bolts and zip ties. Furthermore, by the end of the trip, Gonda’s bike would survive but be deemed unrideable; it now hangs as a trophy in his room.

They embarked from Marquette May 8 and returned May 24. The first leg of the journey was 92 miles to Grand Marais. Tuckered out from the day’s ordeal, they learned to take more breaks for food and for rests, both physical and mental.

“The end of the first day, we were toast,” Watling said. “It was brutal. I had no energy.”

They followed the shoreline as well as they could but stayed on paved paths, since they all rode street bikes, averaging 85 miles a day. They had a total of 107 hours of ride time, and burned some 108,000 calories.

They camped nine nights, and the rest they spent in host houses and hotels. They showered often enough but only got to do laundry once.

They used a GPS tracker and posted about their travels on social media, which was difficult “without brainpower after a 100-mile day,” Watling said.

Their longest but “best” day was 113 miles into Duluth, “Minne-snowda,” which did feature a shower of white flakes, senior outdoor recreation leadership and management major Gonda said with a chuckle.

Another rattling moment happened when the group was temporarily separated. Gonda had already crossed, but Walcott and Watling were stuck on a bridge in Canada fraught with construction as semi trucks “barrelled through” and shook the structure, holding onto their bikes with white knuckles, Walcott said.

Like the journey itself, that was an experience she’ll never forget.

“Great Lakes, Great Stories” will also be the subject of a five-minute movie during the first night of the Fresh Coast Film Festival Oct. 19 at the Marquette Commons.