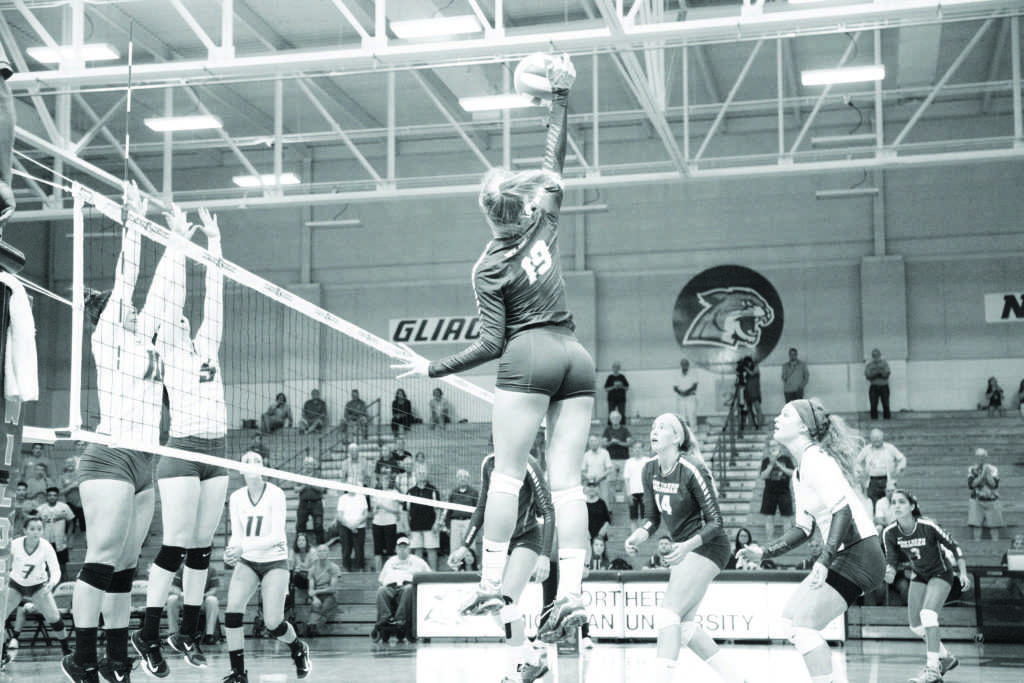 The Wildcats defeated SVSU 3-1, LSSU 3-0 and the Huskies 3-1 to jump out to 3-0 in conference play and 9-2 on the season. This is also the Wildcats’ fifth straight win.

NMU head coach Mike Lozier said the season so far is going just as he expected.

“We talked a lot prior to the season, starting about the things that we would need to do in order to succeed and they were doing those things,” he said. “What’s nice is they’ve been doing what the coaching staff has asked of them and we’ve been seeing results because of it.”

“It’s always nice to get recognition,” Lozier said. “It’s really nice that after the poll came out we validated it by winning. We need to do that on a daily basis. It’s nice to get the recognition but what matters is how you perform on the floor.”

Lozier said only two of the players on the team are his recruits, meaning while he’s running the show, it’s not exactly his team yet from a roster standpoint. Lozier believes, however, that that’s not really a problem, and results clearly show it as well.

“When you come as a new coach, you really don’t know what the girls are going to be like,” he said. “We’re clearly talented physically and I think it’s a matter of helping them understand that they have the support of the coaching staff and that they can play a little bit more freely when they’re out on the court. I think that’s ultimately been the biggest difference between the experience from last year and the experience of this year.”

The match at Michigan Tech was a battle to the very end. With the Wildcats down 18-10 in set one, NMU came all the way back to tie and eventually win the set 26-24.

The Wildcats gained an early edge in set two and every time the Huskies came back to tie or take the lead, the Wildcats would answer with a point of their own. NMU took set two 25-21.

In set three, Tech didn’t want to die. With three chances to win on match point, Tech responded both times and won the set 29-27.

NMU pulled away in set four, winning it with ease 25-14. Senior Madison Whitehead had 16 kills in the contest.

Lozier commented on being down in the first set and finishing off the fourth set.

“We talked during the time out about just basically relaxing and playing our game,” he said. “We were playing a little chaotic where it did not look like Northern Michigan volleyball. We came back and won set one and I think that set the tone for the rest of the match.

“I knew going into the fourth set we were going to handle them. We didn’t make any changes, we didn’t really have a different strategy in the huddle, we just said, ‘hey you’ve got this’ and took care of business.”

“Going into a match with Tech, you always know it’s going to be a close and a tough match,” she said. “With any win, a team will probably get some momentum but I think we all believe in the team enough where we can say ‘we’re going to bounce back and we’re going to win this’ and we proved that in the fourth set.”

Defensive specialist Rachel Braunschweig mentioned adversity and coming together in the match.

“Playing at Tech with their crowd and everything, even more than our volleyball being put to the test, it was more of our character and how we can come together,” Braunschweig said. “How we could overcome adversity, which we had being down by that much in the first set, and I’m really proud of what our team has been able to accomplish so far.”The Wildcats remain on the road for four more conference matches, two of which will be played this weekend. NMU will face Northwood (6-5) on Friday night before a Saturday afternoon match with GLIAC coleader #7 Ferris State (9-2).

Chosa didn’t fail to mention that the Wildcats defeated Ferris State as the first ranked team two years ago and that they’re capable of doing it again.

“They are seventh in the country but we’re also receiving votes,” she said. “Two years ago when they were number one in the country we beat them, so kind of throwing that aside they’re still just a normal volleyball team with athletes just like us so we just go in and treat it like any other game and just play our game.”

Lozier also said he’s looking forward to the match up.

“As soon as the schedule comes out, the first thing you look at is ‘when do we play Ferris, when do we play Grand Valley, when do we play Wayne State?’ And those three teams are doing well right now, so you need to be prepared for them and you have to stay in the moment with the match that’s coming up. It’s not a make-or- break match for us by any means, it’s just an opportunity to see where we stack up against one of the best teams in the country.”

When asked if the Wildcats could keep pace at the top of the conference, Lozier had one short response.

“That’s not even a question.”