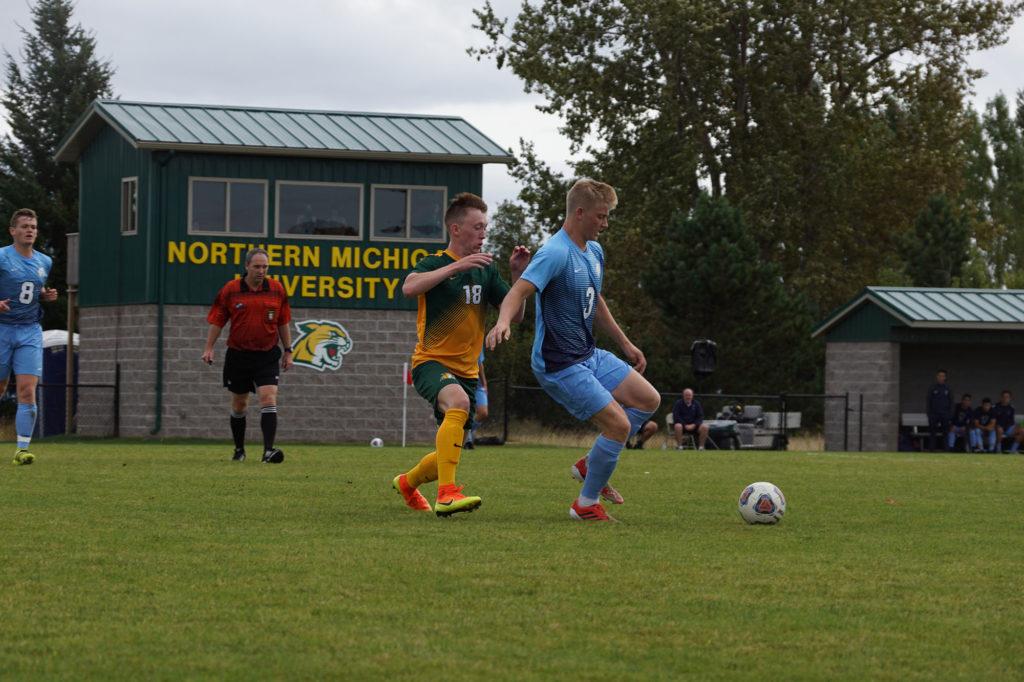 The Northern Michigan University men’s soccer team wrapped up a four-game home stand and faced good competition from their conference opponents over the weekend.

The Wildcats came up short in both games as they were defeated by the Saginaw Valley State University Cardinals 3-0 and the Northwood University Timberwolves 2-0.

“They were both ranked one and two coming in and they both had good results throughout the season,” Poggi said. “ To me, they both beat us with goals that are important goals and those were the ones that could’ve been avoided.”

“I thought we didn’t play too bad, it’s just we had moments of lost concentration,” Astorga said. “It’s unfortunate because honestly, we have the potential to beat anybody in the conference.”

Friday’s game featured an intriguing match against the Cardinals, who were ranked 16th in the NCAA Division II standings.
The Wildcats, hoping for an upset, kept close with the Cardinals at the start. A goal by Saginaw Valley’s Connor Rutz opened up the scoring at 7:22. One more goal was netted by Omar Sinclair to end the half at 2-0 SVSU.

Through the second half, the Wildcats were shut down by the Cardinals’ defense, limited from having three shots in the first half to only one. A late goal by Michael Hamilton at 79:10 put the game away for the Cardinals at 3-0.

Saginaw Valley shot 11 times with five going on-goal, as NMU shot only four times and two of them aimed on-goal. Torelli made a couple saves and sophomore midfielder Collum Opin attempted a couple shots for the Wildcats.

Last Sunday, the game was kept close for both teams with the Timberwolves having a 10-5 shot ad- vantage over the Wildcats. Northwood’s Bryan Lawson opened the scoring up after a free kick deflected off the crossbar at 26:50. Almost 30 seconds later, Austin Hobbs found the net for the Timberwolves to ice the first half and the game.

The second half was exciting and attrition-filled. Both teams combined for 17 fouls and re- corded five shots. However, neither shot was able to find the net. In the game, the Timberwolves put up 15 shots with eight going on-goal, while NMU settled for 10 shots and four went on-goal.

Torelli faced eight shots on-goal and made six saves, raising his season total to 13. Junior forward Sam Popp attempted three shots and leads the team with 13 on the season.

From the Northwood game, Astorga said that the team needs to be with the amount of fouls given.

“We just need to be more mentally disciplined,” Astorga said. “It’s something we can’t have.”

“We can’t have players stacking on yellow cards because at the end of the season, it’s going to make a difference,” Astorga added. Poggi said the amount of fouls are just part of the game.

“Soccer is a funny game,” Poggi said. “It’s like a boxing match. If there’s a referee out in the middle of the ring, you’ve got to make decisions and be on the same level.”

With the Wildcats’ road trip coming up, the team is working hard on defense especially against key conference opponents.
Both Astorga and Torelli said that defense will be key for those match ups.

“Something we’re going to have to work on is our defense, it’s been a little shaky lately,” Astorga said.

“We’re going to need to improve on our defense for sure, because allowing five goals in the last two games is unacceptable,” Torelli said.

The team will head back on the road for matches against the Purdue Northwest University Pride on Friday and the Davenport University Panthers on Sunday.