Photo by Neil Flavin: The cast of the new NMU Forest Roberts Theatre comedy "Noises Off" runs through a high-energy scene during rehearsal on Sunday.

The lights descend and a blast of shenanigans explodes onstage. It’s everything that could possibly go wrong in a theatre production, and you get a backstage ticket to see the chaos that plays out behind the curtain.

“Noises Off,” a slapstick comedy about how a play goes terribly wrong, premieres on Friday, Sept. 29 as the newest production by the NMU Forest Roberts Theatre (FRT).

A play within a play, “Noises Off” was written by English playwright Michael Frayn in 1982. Set in the 1970s, the characters rehearse the sketch of “Nothing’s On,” but a can of snafu sardines spills out onto the stage, and they relentlessly try to put the cap back on. From loud outbursts to actors fumbling over lines and entering scenes off-cue, the audience will be in for a satirical treat. 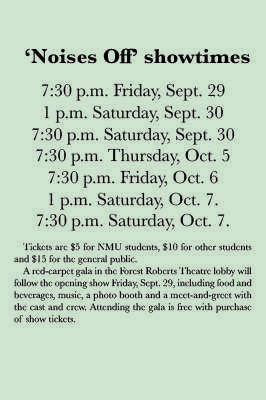 Junior theatre and entertainment arts and English double major Regan McKay, who plays Poppy-Norton Taylor, an assistant stage manager who runs the backstage world, said she really stepped into the shoes of her character.

“As a technician myself, I loved being able to tell that story onstage,” McKay said. “This show is big and ridiculous, but it also shows the other side that people don’t normally see, which is the life inside an actor.”

Jill Vermeulen, senior theatre and entertainment arts and communications double major, plays Belinda Blair, a bubbly character who often “falls prey to the chaos that ensues as relationships dwindle throughout the play,” she said. “It’s over the top and the most farcical piece I’ve done.”

Considering it one of the best comedies written in the past 50 years, Paul Truckey, who is
co-directing along with his wife Keli, said “Noises Off” is all about “comedic timing and doors slamming” and it “thrives on exaggeration” to get laughs.

Truckey also performed this play 31 years ago as a student at NMU. With such love for this classic comedy, he decided to take on the project again but from a different perspective. As a director now, he understands that this play is a much more “complicated aspect” in stage direction timing and also the immense amount of effort it takes to put on the entire production.

Unlike most FRT productions, the actors only had five weeks to rehearse the play. They were cast back in April and required to memorize the script over the summer. In addition to this production being the senior capstone project for three of the students, all the cast and crew have put in hours upon hours.

Bill Digneit, director of the FRT, described the theater process like training a football team, with the cast and crew practicing every night because when a play goes live, it needs to be flawless. Furthermore, precise comedic timing is of the utmost importance.

“It’s just like ‘Seinfeld’ and how Kramer walks in at the right moment,” Digneit explained.

Not only do the actors have to burst on scene and deliver their lines on-cue, but they also have to perform well enough to elicit laughter.

“It’s one of the toughest plays I’ve ever been a part of,” senior English writing major Ethan Bott commented.

Bott plays Lloyd Dallas, a director who shows little compassion for his cast members. Bott was persuaded to take on the challenge of this comedy because it possesses such raw energy—one of the advantages of stage productions for both actors and audience.

“As we’ve become so accustomed to visual orientation like TV, we forget how therapeutic a live performance can be,” Bott noted.