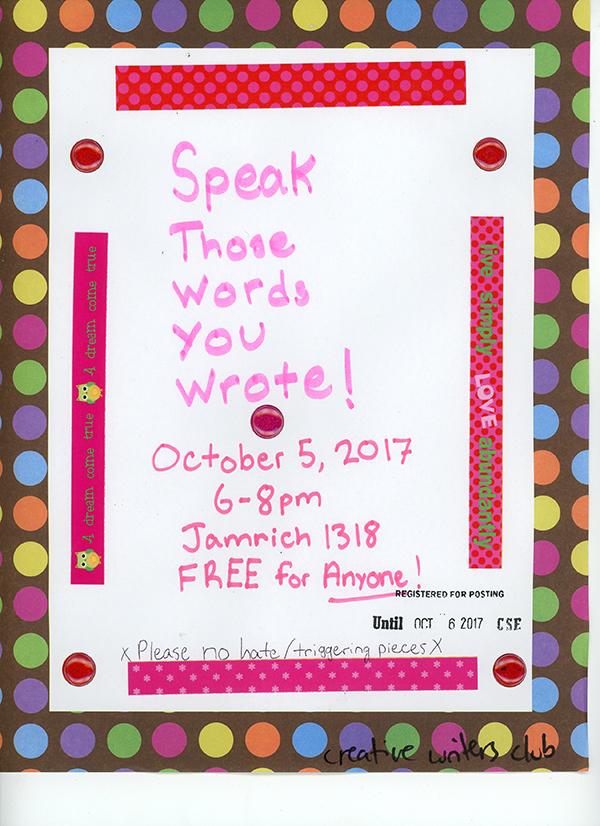 Photo by Lindsey Eaton: Members of the student organization Creative Writers’ Club hand-made posters to advertise for their event “Speak Those Words You Wrote.”

Wordsmiths from across
campus and the community will have an opportunity to showcase their expressive talent tonight at an open reading event hosted by the Creative Writers’ Club at NMU.

“Speak Those Words You Wrote” will be from 6 to 8 p.m. in 1318 Jamrich Hall. It will be a free event for the public and open to any people who would like to read aloud pieces of their own creative writing.

The works could be anything from fiction and nonfiction, to slam poetry and even writing projects created for classes. The only writing not welcome is works that might be considered hate speech or trigger pieces.

Junior English writing and photography double major
Susan Arnold, who is a co-president of the Creative Writers’ Club, said this is the first time the  student organization will
offer the event, but they are hoping to offer it at least once a semester in the future.

“The club last year was pretty much all new members,” Arnold explained. “We spent last year figuring out how to run the club and figuring out what works for our members.

“Then, I went to the Leadership Banquet, and I was super inspired by all these people winning nice things. I was like ‘Let’s do more as a club rather than just meet once a week,’” she said.

Arnold encourages anybody with any kind of creative piece to come out and share that work with the Northern community.

“As long as it’s not hate,” she clarified.

“I’m hoping that it’s more than just club members that show up,” Arnold continued. “But regardless, as long as someone reads, I think it will be successful.”

Next semester if the event is hosted again, Arnold added, the club will try reaching out to local high schools in the area to “open up the bridge” and possibly also do some advertising at DIGS Gastropub’s Tuesday poetry night events in order to promote to a broader range of people in the community.

The press release for the event reads, “If you’ve been working on a project or if you had a brain-blast the hour before, we accept any writing (within reason) and we encourage all to share!”

The Creative Writers’ Club meets weekly from 6 to 8 p.m. on Fridays in room 311 of the Learning Resource Center at NMU. Any people are welcome to join and to share their creative works with the group.

The club is formatted as an open-minded, inclusive, constructive workshop-style environment for writers to get feedback and encouragement from fellow writers, as well as to make new friends.