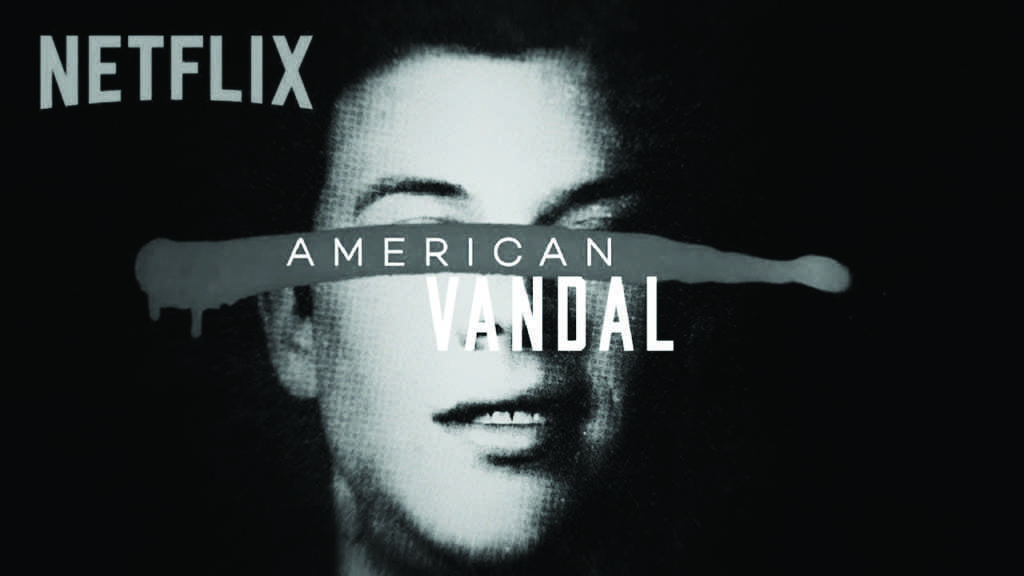 A new Netflix original series hit the internet like a storm. “American Vandal” is boldly unique and draws questions to issues of justice, like how easy it is with a strong enough narrative to paint basically anyone with guilt, that is simultaneously relatable despite a ludicrous plot.

For anyone who saw “Making of a Murderer,” the documentary about the alleged unfair treatment and imprisonment of Stephen Avery, they will immediately notice the similarities. That documentary sparked a heavy social media buzz and even started petitions to try to get Avery exonerated. 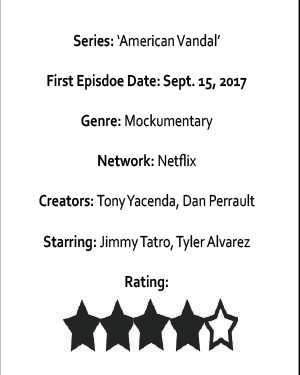 However, the big difference with “American Vandal” is this new series is totally fictitious and satirical.

The premise of “American Vandal” is, admittedly, a hard sell because of its immaturity. It takes the form of a student documentary, based around a vandalism that left 27 school faculty members’ cars each spray-painted with an image of male genitalia.

The characters seem like real high school kids. Furthermore, they are realistic because no one is really a true antagonist; there is no villain or hero in this tale. Each person has good and bad qualities and makes good choices and questionable choices.

Dylan Maxwell, played by Jimmy Tatro, is the kid in class who always has something up his sleeve. Being disruptive, goofy, a stoner and self-admitted prankster, Dylan is the perfect scapegoat for the school to blame. But you go through this journey with Dylan and his friends, the “Wayback Boys” (because they go way back), and can even find yourself rooting for him. Plus, Tatro is truly hilarious from start to finish.

Even though you’re rooting for Dylan, you can’t help but shake your head at some of the things he says or does because he does not do a great job at making himself look innocent.

Peter Maldonado, the documentarian, played by Tyler Alvarez, uses interviews, security footage, filming of the school board’s meeting with Dylan, social media videos, diagrams, charts and almost everything in between to create a living, breathing universe. All these tools make this documentary look, sound and feel like a real event. Facebook invites and Snapchat stories and Twitter hashtags are vehicles to drive home Peter’s theories.

Peter runs with different theories, investigating a plethora of characters from class president, to a foreign exchange student, back to Dylan and around again. It is done with such thoroughness and objectivity that at some point you find yourself believing most of the theories could have happened.

The further away from a
definitive answer, the more you get involved and want to know.

This show has social commentary elements driving it, but it does so in a smart and clever way. It says that with a strong enough narrative, add in reputation and string together a loose motive, and you can make a believable witch-hunt against anyone, whether against the class clown or a staff member.

That theme can make you question the justice system as a whole and the impact of prejudices on our own judgment. How much do our preconceived notions affect our behavior? If people think you are the bad guy every day, do you start believing them?

“American Vandal” at a glimpse is immature and hard to take seriously, until the show actually begins and is done beautifully and realistically enough that it is believable regardless of the ridiculous premise.

It’s stylishly edited with documentary-like trophs, and has a young cast who all do great. But undeniably the standout is the performance by Tatro that will break up your investigative thinking with laughs until the finale.

Its believable setting and characters plus its comedy makes it a standout series.