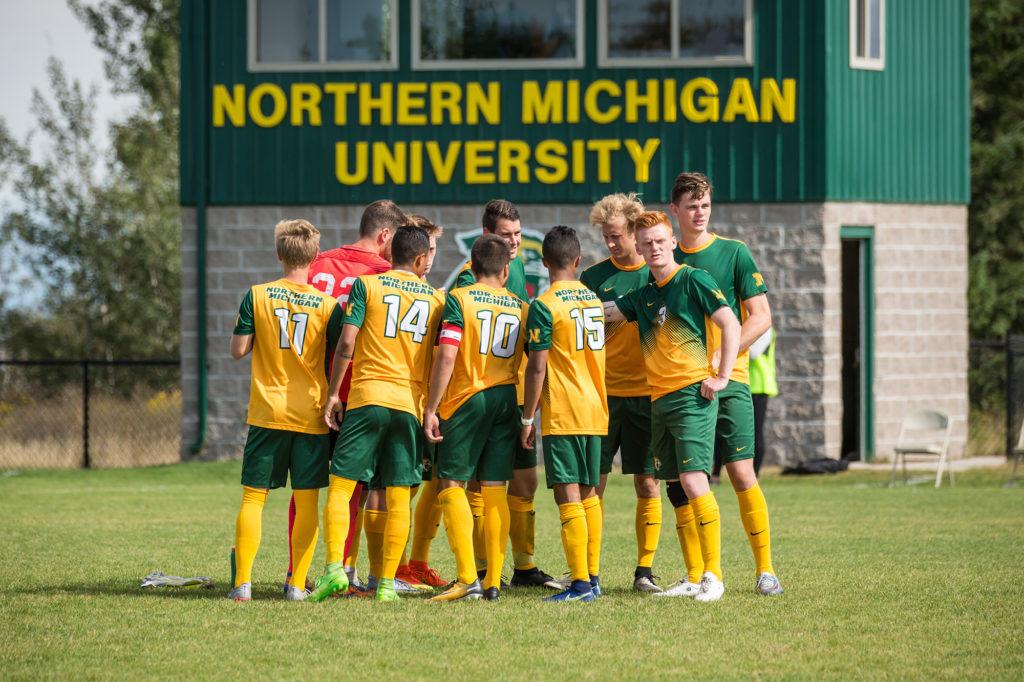 Photo courtesy of NMU athletics: The Men’s Wildcat Soccer team huddles up, and puts their hands in at a home game earlier in the season. The team has accumulated a conference record of 1-5 after last weekend’s home games.

Creating shots and opportunities to score were key to the weekend as the Northern Michigan University Men’s soccer team split home match ups with a 1-0 loss to the Tiffin University Dragons and a 3-0 win over the Ashland University Eagles.

“After we came back home from our first road trip, we started to create more chances to score and that comes from good defending,” Wildcats head coach David Poggi said. “We’ve been getting those chances, we just haven’t succeeded on them.”

Freshman forward Birkir Baldursson said that the team is slowly improving on attempting more shots into the net more often.

“We made some basic changes and we’ve been working really hard to try to improve on our shots, and I felt we did a good job from that,” Baldursson said.

Last Friday against Tiffin, the Wildcats came out and controlled the game throughout the first half. NMU outshot the Dragons 8-1, with a pair on target for goal. Sophomore defender Lewis Murray and midfielder Edgar Astorga were recorded with the shots landing towards the net.

However, near two minutes into the second half, Tiffin’s Matthew Tait landed the lone goal of the game and secured the win at 1-0. After the goal, both teams were physical controlling the ball, combining for five fouls and one shot on goal throughout the rest of the game.

The goal was the first shot sophomore goalkeeper Brayden Wilinski had faced, but was unsuccessful to record a save.

Wilinski faced five shots overall, but did not record a save in the contest. NMU outshot Tiffin in the game 13-5. Wildcat freshman defender Isaac Wigermo lead the team with three shot attempts. Along with Astorga, junior forward Sam Popp and Baldursson also contributed in the shot column.

On Sunday against Ashland, the Wildcats started off the game as they did with Tiffin. The Wildcats held the Eagles without a shot in the first 25 minutes, while coming up with eight of their own. Ashland threatened to score late from corner kicks, but was unable to going into halftime.

NMU would get on the board in the second half as Feldmann put in a goal at 52:08. The Wildcats would keep their tempo going as Baldursson and Popp would score the next two goals in 15 minutes to seal the game up at 3-0. Popp added two assists in the game, along with an assist each from Astorga and sophomore midfielder Sveinn Karlsson.

“It felt good. Even though it hit me in the face, it was a good feeling to score that goal,” Feldmann said on the first goal.

Feldmann added that teamwork was the main reason for the win.

“We definitely came together better as a team and got a good win against Ashland,” Feldmann said. “We kept a clean sheet and got a couple goals when we needed to.”

Sophomore goalkeeper Fillippo Torelli returned in goal against the Eagles, as he faced just two shots on goal, notching a save on each. Torelli’s performance would earn him his second shutout win of the season.

With the team going back on the road for a pair of games this weekend, the team knows that every game and point is critical for them.

Poggi said that by not scoring a lot of points, the team is urging to win more games and score some points for the playoffs.

“For us to not get any points, especially in the [Tiffin] game, I thought it was hard on us,” Poggi said. “When we get down to be looking for a playoff spot, that’s an important stat to think about.”

The Wildcats will look to earn those points as they face off at the Northwood University Timberwolves on Friday in Midland and the Saginaw Valley State University Cardinals in Saginaw.