Wildcat Hockey is back 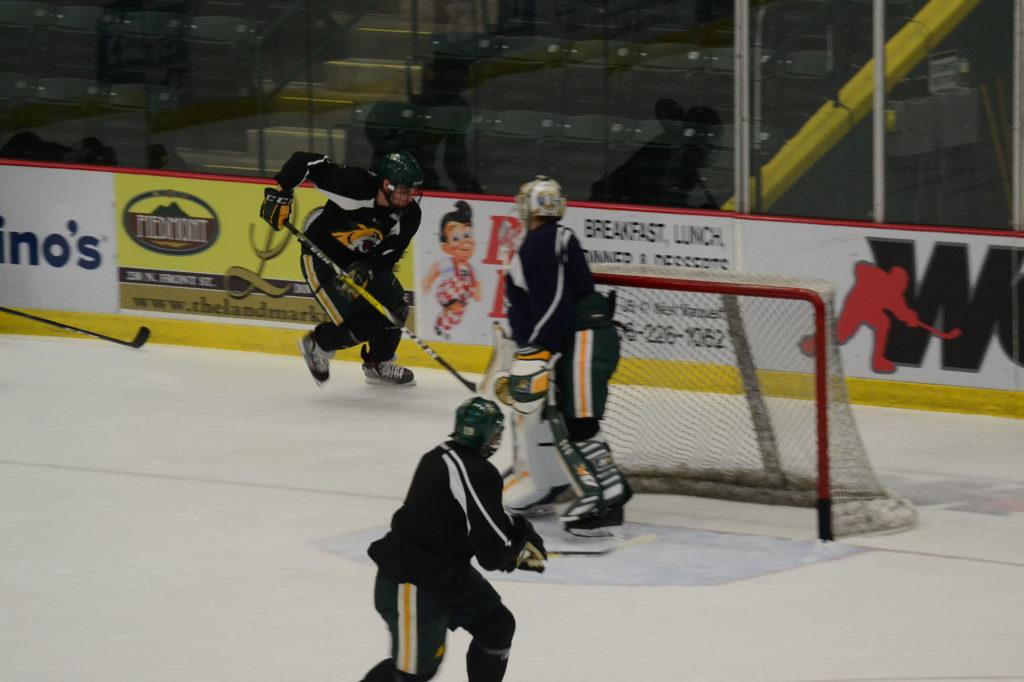 Photo by Lindsey Eaton: An NMU defender guides the puck behind the net in a practice leading up to their season opening series against Lake Superior State University. Last season the team finished overall 13-22-4.

Fans wanted change, and fans got that change. Whether the seats will be full at the Berry Events Center this season is a matter of whether new head coach Grant Potulny can get the Northern Michigan Hockey team back to its winning ways.

The last time the Wildcats were over .500 was the 2011-12 season, posting a record of 17-14-6 under former head coach Walt Kyle and a member of the now-extinct Central Collegiate Hockey Association at the time.

Kyle’s contract was not renewed after the season’s end in March of this year after the Wildcats finished with a record of 13-22-4, making way for Potulny, a North Dakota native, who played college hockey for the Minnesota Golden Gophers. Potulny was a three-year captain for the Gophers, leading the team to back-to-back national championships in 2002 and 2003. Potulny was also an assistant coach at Minnesota for the last eight years before coming to NMU.

In his introductory press conference in March, Potulny mentioned playing with speed and playing to the size of the Berry’s Olympic-sized ice sheet. After several pre-season practices, Potulny echoed that statement at Tuesday’s game week press conference.

“You hear a lot about lack of offense that was generated in the past, and I think they’ve done a good job with the new concepts we’ve brought to them,” Potulny said. “I do think we have some guys that can play fast, and you don’t always have to be fast to play fast, but we have some guys who can think it and move the puck pretty fast.”

The Wildcats scored 93 goals last season, and while that seems like a lot, that’s an average of 2.38 goals per game, good for 48th in the county out of the 60 Division I teams.

Payne was second in team scoring last year with 29 points. Craighead was fourth with 25 while Diamantoni was sixth with 20.

“It’s definitely a huge honor,” Diamantoni said. “It’s something we’re proud of, and we’re really excited for the year too. We were in those guys’ shoes [the freshmen]not too long ago and it’s cool to see them coming up now and getting used to everything. Now I think we’re just really excited to start playing and to see what happens with the team.”

Klimek said game week practice has gone well so far and he’s looking forward to hitting the ice on Friday.

“The first day of game week went well,” Klimek said. “The process of keeping the momentum going for opening night is obviously important.”

Another big asset for the Wildcats this upcoming season will be junior goaltender Atte Tolvanen.Tolvanen was 18th in the nation in save percentage last year with a .918 in 38 games played and posted five shutouts, all five of those consecutive. The shutout streak tied a NCAA record and propelled the Wildcats into WCHA playoff positioning. Tolvanen had a scoreless streak of 339:05 and stopped 220 shots.

Potulny said Tolvanen can match any Division I goaltender out there.

“Personally I think Atte [Tolvanen] is up there, not only with the WCHA, but I think any goalie in college hockey,” he said. “You can stack him against anybody and he’ll be right in the conversation.”

After an eighth place finish and a first-round playoff exit last season, the Wildcats were tabbed to finish seventh in both the WCHA pre-season coaches’ and media polls. Tolvanen was named to the preseason All-WCHA Second Team. Freshman forward Joseph Nardi also received a vote for WCHA Rookie of the Year.

“I don’t think our team is really concerned with the outside opinion of where we’re at,” Potulny said. “I think there’s a lot of confidence in our own group and our own locker room and that’s what counts at the end of the day.”

The Wildcats open the season on Friday at Lake Superior State. The Lakers then return the favor by making the trek to Marquette on Saturday in what will be a non-conference home-and-home tilt between the two WCHA schools.

The Wildcats will also honor former head coach Rick Comley by dedicating the ice in his honor.

Potulny said while he’s done his homework on the Lakers, he’s mainly worried about his own team.

“They do a good job on the breakout and supporting the puck,” he said. They flood one side of the rink and if you aren’t mindful of your responsibilities on the forecheck you can get caught in some odd-man rushes.

“But I’ve always felt you should worry about your own team, and there’s going to be certain things that the other team does and certain players you’re going to have to worry about when they’re on the rink. I think you do what you do well and hopefully you put the bar right here, and if somebody gets to that bar and beats you, you tip your cap to them but you don’t want to beat yourself.”