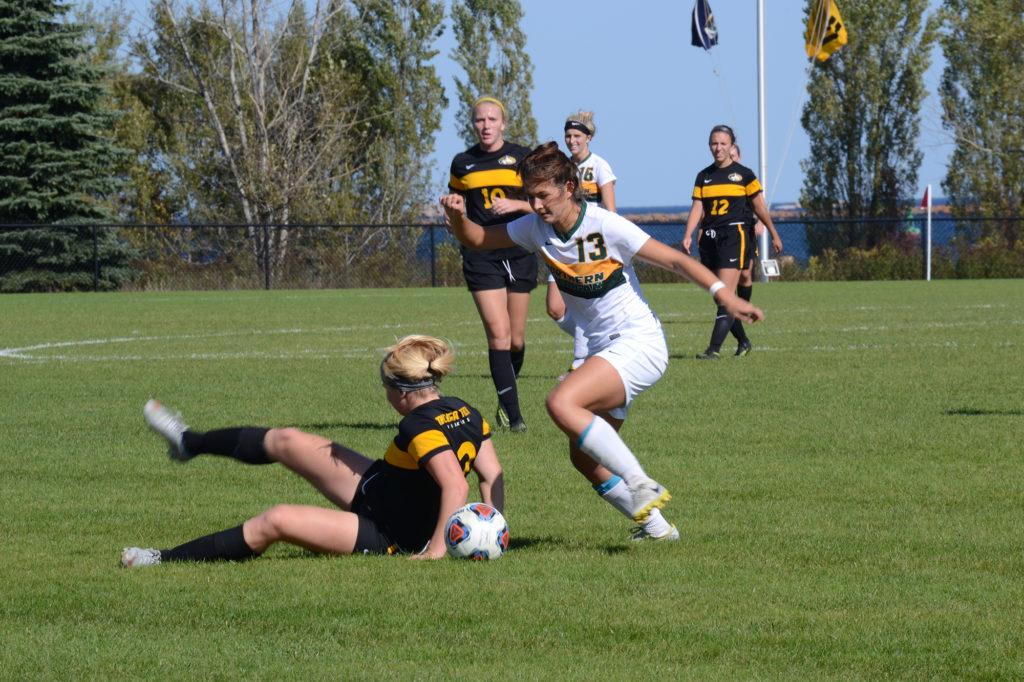 Photo by Lindsey Eaton: Junior defender Sophia Sachs dribbles around a Michigan Tech player, who is sitting down for whatever reason. Sachs appeared and started in 17 games last season and was named Newcomer of the Year the previous season.

The NMU Women’s Soccer team came out on the short end of a 1-0 result against the Michigan Tech Huskies on Sunday afternoon, despite a hard-fought match by both teams.

The first half was not a good one for the Wildcats on the stat sheet, as they attempted only two shots, neither one ending up on goal. The Huskies, on the other hand, were able to get their offense going and found the back of the net in the 26th minute. The goal was scored by MTU’s Katri Studtmann, and the visitors found themselves up 1-0. NMU was called offside on two potential breakaways that could very well have changed the nature of the match, but at the half, the 1-0 score remained.

Studtmann’s first half goal proved to be the difference maker, as neither team was able to score for the remainder of the game. NMU’s scoring chances were few and far between, and at the end of the match, they found themselves with only two shots on target to Michigan Tech’s five. The Wildcats also failed to capitalize on any of the 4 corner kicks they were awarded, and the final score was 1-0 in favor of the Huskies.

“We weren’t disappointed with our play, but we definitely expected a little bit more out of ourselves,” said senior defender Allyssa Milam, “especially in the final third. That’s something we’ll look to focus on this week.”

The stats, however, are a bit misleading. Throughout the game, NMU was able to control the pace and play good transition soccer. Once they got into a position to potentially score a goal, however, Michigan Tech’s defense pressured hard, and the Wildcat strikers found it difficult to cope.

“I think we dictated play for most of the game,” said head coach Sonia Basma. “On paper you can go from the back all the way to the front, and if you don’t release a shot, it doesn’t say that you had possession there. This week, we’ll be focusing on putting the ball in the back of the net.”

The Wildcats will play host to the Tiffin University Dragons and the Ashland University Eagles this weekend, both games that the team is looking forward to.

“They’re both very good opponents,” Basma said of the weekend’s competition. “We always play better against the better teams, so I think it’ll bring the best out of us. With Tiffin, it’ll be whoever shows up that day and plays, and it’s the same with Ashland. That’s really how this conference is.”

As a result of the match against Tech, the Wildcats fall to ninth place in the 10-team GLIAC, ahead of only Purdue Northwest. Their record drops to 2-7-2 overall, 1-2-2 in conference play. NMU is still in contention for the GLIAC playoffs, and this weekend will be a crucial one for their postseason hopes.

The match against Tiffin will kick-off on Friday at 4 p.m. while the match against Ashland is set for a Sunday noon kick-off. Both games will be held at NMU’s soccer field.