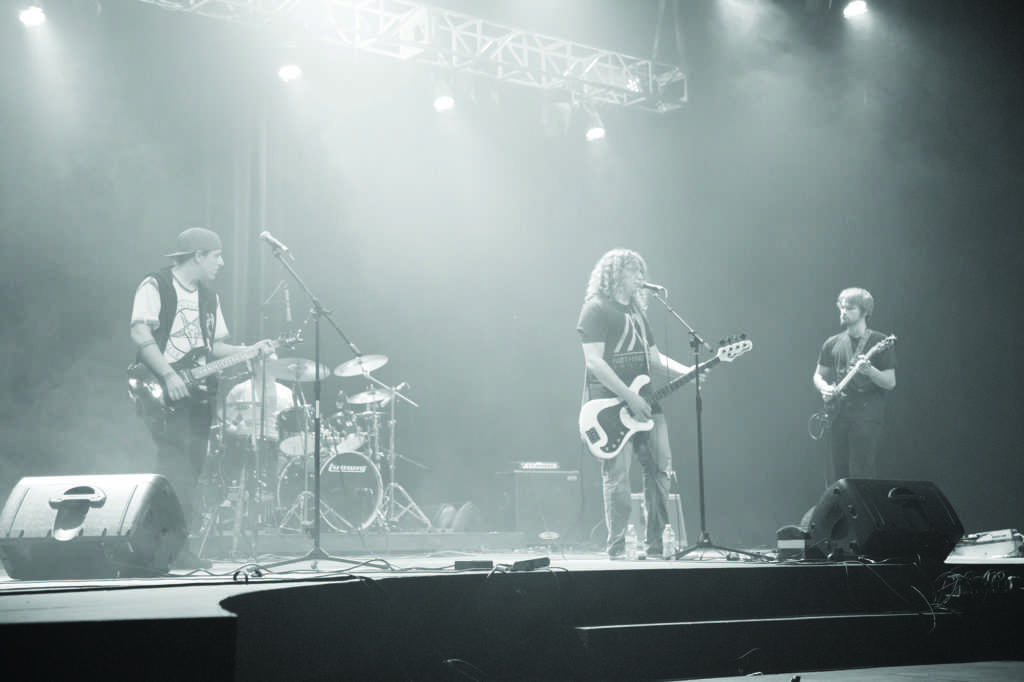 Photo by Neil Flavin: Local heavy metal group Now Society Fails jams on stage at the “Rock the FRT” battle of the bands concert Saturday night in the Forest Roberts Theatre, beating out five other music groups for the $300 grand prize.

Audience members and fans gathered Oct. 14 at the Forest Robert’s Theatre to cheer on music groups and enjoy the second annual “Rock the FRT.”

This battle of the bands featured six diverse acts with styles ranging from heavy metal to feel-good soul. Each band competed for a $300 prize and were judged by a panel of leaders from the local music scene.

The Daydreams opened up the night with their Dave Matthews Band-esque sound. Next on the stage came Tease, a ’70s, ’80s and ’90s cover band that brought down the house with a trip down memory lane with classics like Queen’s “Somebody to Love,” earning them third place.

Joel and the Good Boys, named after a band member’s one-eyed dog, captured second place and the $200 prize with their modern rock sound and humorous lyrics and antics, plus their crooning trumpet. Brady Skewis of Negaunee is the lead singer and guitarist of the group.

“I helped out with the inaugural battle of the bands last year,” Skewis said. “It was kind of my own thing when I was helping them last year. [But] I was like, ‘I have to make a band and enter for this year.’ This was my goal, and I’m very excited to be a part of it.”

Skewis brought a lot of energy and comic relief to the stage as well, dancing and rocking out on guitar.

“I’m just excited to perform for this live audience. It’s just going to be really great, and I’m hoping that everybody’s going to have a great time,”  Skewis added.

Joel and the Good Boys sold merchandise at the event and were heavily represented in the audience with T-shirts of white spray paint designs.

“I made about 40 shirts by hand just so that my friends could [represent] my band in the audience. We’ve had countless rehearsals and songwriting sessions, just different things to get the energy going,” Skewis explained.

Heel Click, a one-man band, brought some original pop on his acoustic guitar and foot tambourine, in a performance that included plenty of dialogue with the audience.

But in the end, Now Society Fails brought home the gold and the audience to its feet, with their gritty, heavy metal rock, piercing vocals and solid guitar riffs.