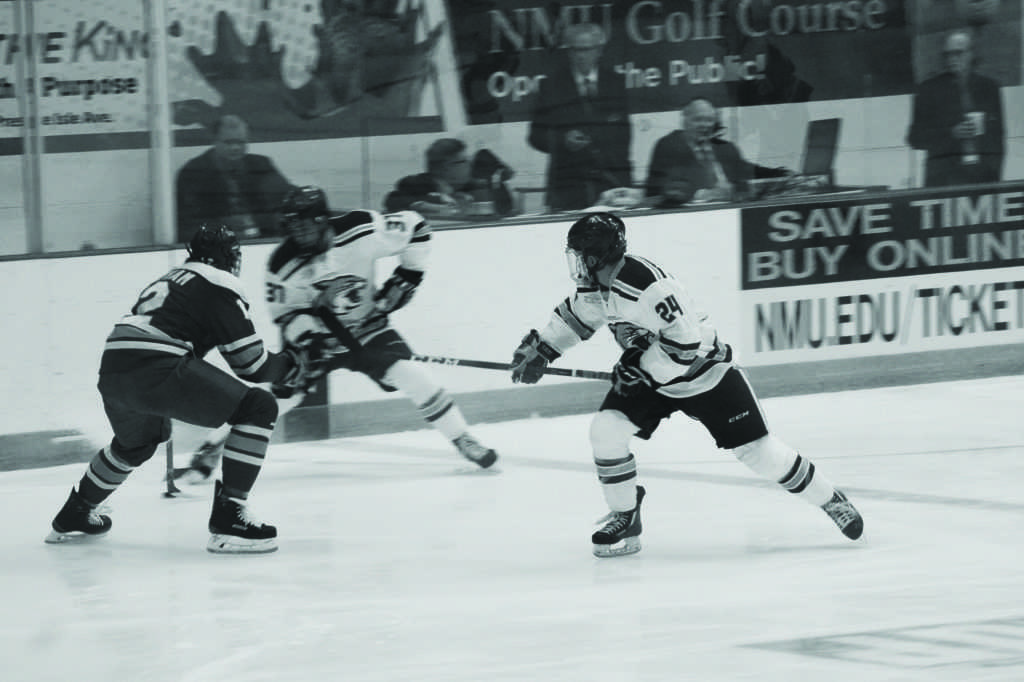 The 2017 edition of the Northern Michigan Hockey team kicked off their first weekend of WCHA play with a 3-2 victory over Ferris State University in the first game of the series and, thanks to a last second goal from sophomore forward Darien Craighead, captured the second game 1-0 over the Bulldogs to pull off the sweep.

“It was a good start for us on the road,” head coach Grant Potulny said. “Any time you go out on the road, you want to come back with points. On Friday night, it probably took 10 minutes to get in the game.”

Despite cranking out the first seven shots of the contest, including a possession with back to back shots from just in front of the goal crease, the Bulldogs were unable to slip one past junior goaltender Atte Tolvanen in the first period.

By the end of the evening, the goaltender blocked 40 out of FSU’s 42 attempted shots and defended double-digit shots in each period. One of the Bulldogs points came from a strange sequence of events when an FSU shot went off the post, bounced off the glass behind the goal, hit Tolvanen in the back, and fell into

the goal for a score. The Wildcats only managed 20 shots in the contest.

Potulny said the reason you don’tseetheWildcatinbetween the posts make any dramatic “highlight reel saves” is because he is technically sound and is always where he needs to be in net.

“He can read where the puck is going to go. Some goalies don’t have that ability,” Potulny said. “He’s never surprised when there’s a lateral pass or lateral play. He’s been outstanding.”

Freshman defender Adam Roeder tallied the first goal of the game at the 15:21 mark.

Last week’s WCHA Offensive Player of the Week senior forward Robbie Payne scored his fifth goal of the season at the 13:19 mark of the second period and junior forward Troy Loggins scored in the third period to give NMU a 3-2 advantage seven minutes and 18 seconds into the period.

Saturday’s contest looked as if it might go into overtime with the score locked at 0-0 with the last fleeting moments of the game slipping off the clock, but the Wildcats had other plans in mind.

In an attempt to run out the last eight seconds of regulation, Ferris went to clear the puck out of their zone. However, junior defender James Vermeulen made

an athletic leap and bopped the puck back into Bulldog territory. Vermeulen passed the puck toward sophomore defender Philip BeaulieuasapackofBulldogs raced to stop what they thought would be a last-second shot from the sophomore.

Instead, Beaulieu slipped a pass across the zone to Craighead, who blasted in the winning goal and iced the Wildcat sweep over the Bulldogs.

NMU now looks to a series with the University of Wisconsin (4-1, 1-1 Big Ten) next weekend at the Resch Center in Green Bay, Wisconsin. Friday’s game will be played at 8 p.m., while Saturday’s contest is set for 5 p.m.

Wisconsin is on a three-game winning streak and took down Michigan Tech in the U.S Hockey Hall of Fame Game to start the season.

Potulny said the Wildcats will have to fix its inconsistent penalty kill if it wants to keep up with the Badgers.

“I think the penalty kill has been our Achilles heel a little bit,” Potulny said. “We’ve dodged some bullets and won some games while giving up goals on the penalty kill. We can’t expect to go the whole year giving up zero goals on 5-on-5. That’s just not going to be the case.”