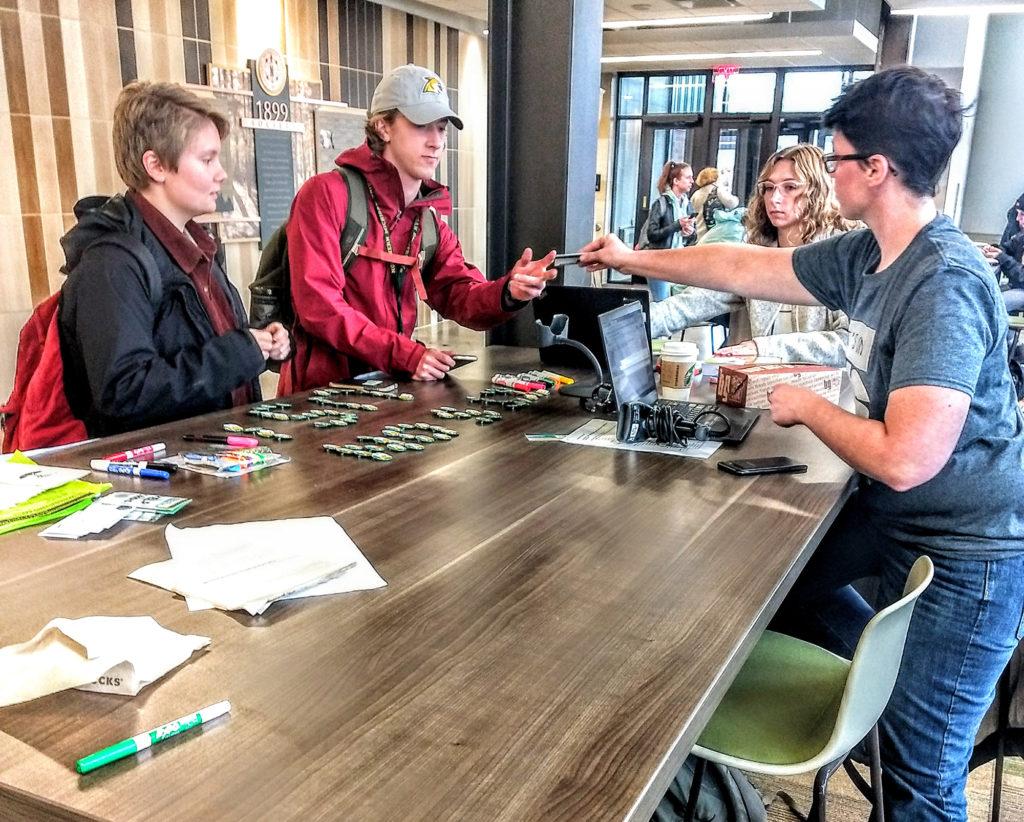 Photo by Winter Keefer: Student volunteers assist in collecting pledges to combat sexual assault on campus for the “It’s On Us” Campaign’s Week of Action.

NMU applied for two grants this month that are aimed at combating sexual misconduct on college campuses, one specifically for NMU and the other in collaboration with Michigan Technological University.

The grants are both through the Michigan State Police Department who have a pool of $600,000 that will be distributed to colleges and universities across Michigan.

One of the grants was headed by Associate Dean of Students and Deputy Title IX Coordinator Mary Brundage. This grant asks for about $20,000 and is oriented specifically toward providing education and resources to the friends, roommates and fellow students who receive disclosure from peers about a case of sexual misconduct.

“We’re talking to people who are supporting survivors,” Brundage said. “We’re asking both parties: ‘How are you doing?’ and making sure resources are known.”

Research shows that reports of sexual misconduct are most likely brought to friends first,
Brundage said.

The first phase of action to be implemented through this grant would be an anonymous survey to determine how many students have been a recipient of sexual misconduct disclosure, Brundage said. The survey will also request insight into what information students wished they would have had to better support their friend and better care for themselves. The survey will happen regardless of if the university receives this grant money, she added.

“Students feel more comfortable talking to their peers,” she said.

In the grant it is stated that: “How these friends respond can help or further complicate the recovery of the survivor.”

If the grant is awarded, the results from the survey will be used to create student-oriented informational videos that tackle what students “wish they would have known” when a sexual misconduct disclosure was made to them. Over time, this could become a standard component of orientation and UN100 courses as well, going beyond the grant.

A campus-wide program would also be delivered during Fall 2018, where students would role play 3 to 5 scenarios generated from the survey. These scenarios would be followed by information provided by on and off-campus outlets for students to go to about sexual misconduct. The outlets include Housing and Residence Life, the Dean of Students Office, NMU’s Title IX Coordinator, the Women’s Center, Counseling Services, the Health Center and Public Safety and Police Services.

Director of Equal Opportunity and Equal Opportunity Officer and Title IX Coordinator Janet Koski has headed a second grant in collaboration with Michigan Tech. This grant focuses on providing information and support to men in the case of sexual assault or misconduct and is asking for just under $14,000.

This grant will also focus on feedback based on what students feel is important to know in different scenarios of sexual misconduct, while also informing them of what resources
are already available, Koski said.

There are two goals that will come with this grant, if received. One is to provide
educational programming that addresses concerns of our male populations, and the second is to teach students how to disrupt sexist behavior at its earliest stages so that it does not grow into verbal or physical expression.