Life on the Appalachian Trail: The story of an NMU student that braved the famous path 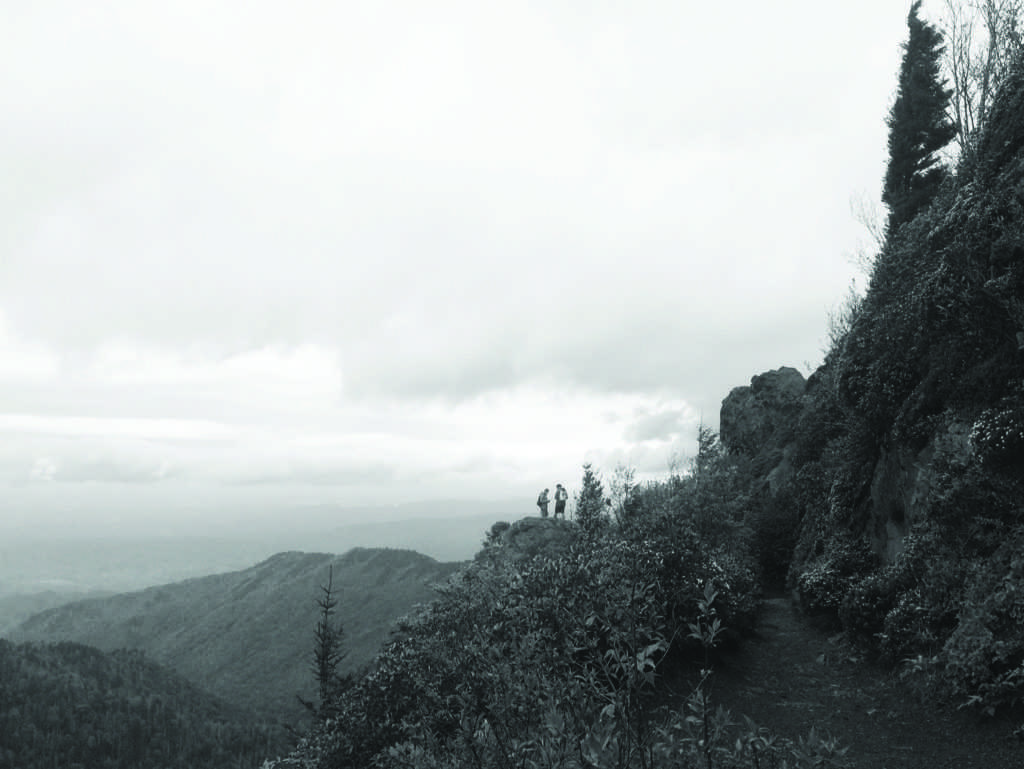 Photo courtesy of Ben Schimpf: Hikers appear minuscule atop the mountainous heights of the Appalachian Trail, a path that spans 2,181 miles from Maine to Georgia and through 14 different states. Ben Schimpf, an NMU senior outdoor recreation and leadership management major, hiked 556 miles of the trail this summer.

Sleeping on the trail and ascending mountains every day for months at a time: this is the life of a “thru-hiker,” a long-distance backpacker. For a portion of the summer and 556 miles, this was the life of Ben Schimpf, an NMU senior outdoor recreation and leadership management major.

Only a few days after school ended in May, Schimpf set out alone for the Appalachian Trail (AT), which spans 2,181 miles from Maine to Georgia and through 14 different states.

The thought of living in nature and having to meet only basic needs is appealing to many, though it comes with a great deal of worries—especially when hiking alone. In Schimpf’s experience, hiking alone is not nearly as terrifying as everyone believes. For one thing, the AT is densely populated, and not a day went by that Schimpf did not see at least 10 other hikers. The solitude allowed him to approach the trail at his own pace and decide his own experiences.

“I think I gained a perspective of how easily and simply I could live. I was able to experience the bare minimum needed to survive and… focus on the environment around [me] and the hike itself,” Schimpf said.

Putting miles under his feet felt empowering and gave him a new perspective on minimalism.

Though he enjoyed living simply, he admits that he grew tired of the monotony. Originally, Schimpf had planned to hike about 119 days longer than he did. He cut his trip short after 31 days because it grew too repetitive, and he said he does not have the grit or patience to hike for 150 days straight.

“I… got to the point where if I continued, I wasn’t going to gain anything more from that time on the trail, but I think I would enjoy setting another 30 days aside and knowing that I could hike another few hundred miles,” Schimpf said.

Although his trip was shorter than expected, he still had to do a great deal of planning and preparation. For one thing, cost was a big factor, and he spent around $1,000 for gear, though many individuals easily spend triple that.

Schimpf spent a lot of time finding deals and knock-off brands, this included a water purifier, shelter, sleeping mat and even a stove. There are many considerations to take into account when choosing gear, such as durability and weight. For long-distance, many hikers travel as light as possible. For Schimpf, this means having a single change of clothes and carrying three days worth of food.

On top of gear expenses, resupplying costs the average hiker about $1,000 per month. The AT has roads that go into town every two to three days; in town, hikers can go to the supermarket to pick up supplies. Often times, you can hitch a ride into town, since it’s easy to tell if an individual is a long-distance hiker, Schimpf said.

He also had to build his physical endurance. To train himself, he began walking to school instead of biking. He averaged 3 to 6 miles daily; on top of this, he mountain-biked and ran, his usual exercise.

“I was actually surprised in how good of shape I was when I hit the trail. The second day, I hiked 20 miles, and that was my average for the whole time I was out there,” Schimpf said.

Despite being physically fit, Schimpf faced struggles once he realized how mountainous the trail was going to be. Within the first mile of the trail, elevation rises 3,780 feet above sea level, making for an unexpectedly challenging hike.

“You’re just climbing up and down mountains all day long,” Schimpf said.

Though it was intense, he claims it was liberating to look back and see all of the mountains that he hiked that day.

Overall, Schimpf would encourage others to not be intimidated when wanting to tackle something big such as living in the wilderness for 31 days. He claims it’s all about starting small and slowly building up to your goals.

“[Make] progress everyday, [save] a little more money every day, [and] take little baby steps building up to that huge goal. If someone else [is] interested in doing something like that, start now. Start today. Don’t put it off. It’s pretty easy when you do it that way,” Schimpf added.