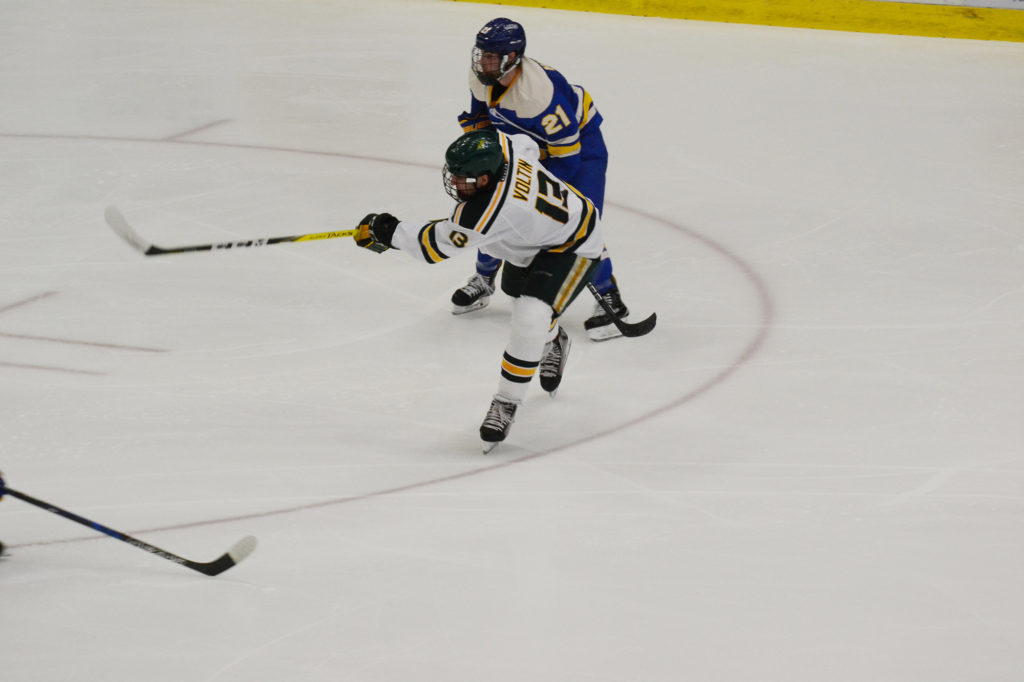 In a non-conference series over the weekend, the Northern Michigan Wildcat Hockey team had day-and-night results against the Big Ten’s University of Wisconsin Badgers, grabbing a 5-4 overtime victory Friday night and getting blanked 4-0 the next night.

On top of taking advantage of power-play situations, head coach Grant Potulny commended the team’s penalty-kill, referencing two minutes where the Wildcats fended off a 5-on-3 mismatch against the Badgers.

“I think for two-and-a-half periods, there’s no doubt that we were the better team on Friday,” Potulny said. “But we’ve got to find a way to close out the game.

While the ’Cats seemed comfortable with their lead, Wisconsin got it together for their last 20 regulation minutes on the ice and cranked out two goals to force overtime.

The sudden-death five-minute period came to an end with just 17 seconds remaining when Pierce found the net for his second time that evening. His third goal of the season was assisted by junior forward Troy Loggins who increased his season total to six, tied for second most in the country.

Despite pulling off the win, Potulny said it was the team playing conservative defense and not thinking of producing goals that allowed Wisconsin to catch up in the third period.

On Saturday, the team was unable to come close to the previous night’s results and were swept 4-0 to the NCAA’s fifth-ranked Wisconsin Badgers.

Despite a 13-3 shot advantage for the Badgers, NMU was able to hold Wisconsin scoreless for most of the first period. A goal by Wisconsin’s Ryan Wagner nearly 17 minutes into the period put NMU down, 1-0.

After a pair of UW goals put NMU in a 3-0 deficit, sophomore goaltender Mathias Israelsson entered the game, taking out junior goaltender Atte Tolvanen. Israelsson recorded 21 saves the rest of the way, a season-high for Israelsson.

“I think that [Israelsson] was outstanding on Saturday,” Potulny said. “He gained a lot of confidence, my confidence and the team’s confidence.”

Potulny said that Tolvanen has had his strongest performances of the season when their opponent was able to pull off a lot of shots on net. But when he isn’t challenged by as many attempts, his performance suffers.

“As a goalie, when you start feeling the puck, you get into the game,” Potulny said. “When you don’t feel it, you still have to be ready for times when there is an opportunity. That’s been a challenge for [Tolvanen.]”

The Wildcats get nearly two weeks of rest in preparation for Minnesota State University, Mankato. NMU will play host to the Mavericks Nov. 3 and 4, with both contests in the Berry Events Center scheduled for a 7 p.m. start.

The Mavericks stand with an overall record of 3-2 including two victories over Division I’s sixth ranked Boston University Terriers.

“Minnesota State is as good as anybody in the country, and that’s not coach speak,” Potulny said. “They are deep in every position they’re well coached and they’re the veteran team.”