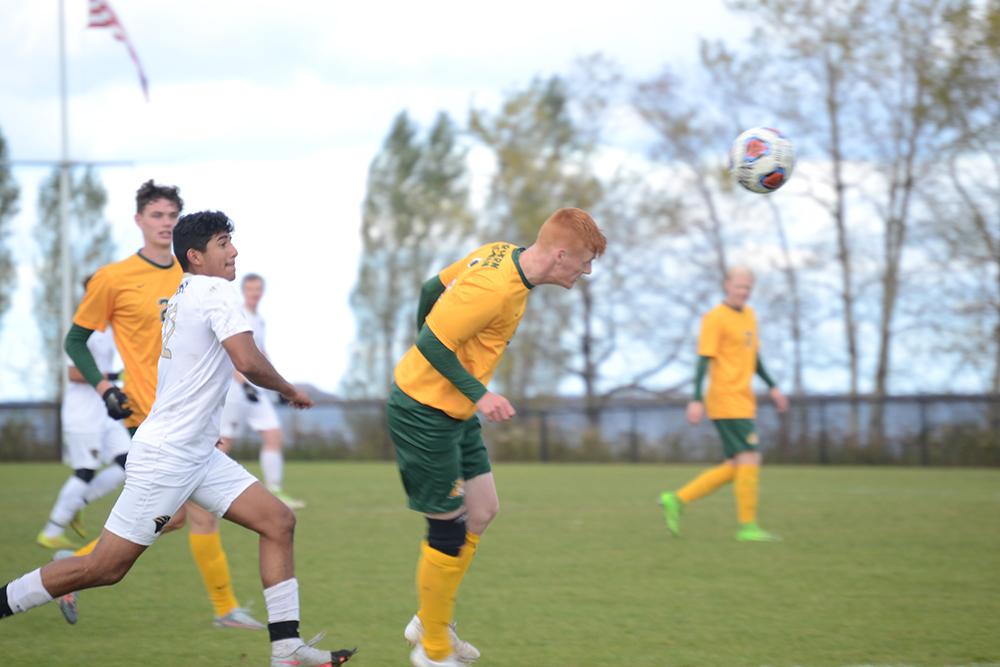 Photo by Lindsey Eaton: Photo taken during the Wildcat's victory over the Purdue Northwest Pride.

With one game left in the regular season, the Northern Michigan Men’s Soccer team’s hope for a playoff spot hangs in the balance after settling for a 3-3 draw to the Ashland Eagles and lost 2-0 to the Tiffin Dragons over the weekend.

“At this time of the season, we’re scrambling to try to get in the playoffs and we played like it in these two games very well,” Wildcats head coach David Poggi said. “We got a point which keeps us alive, but we could’ve got one more point we needed in the second game.”

Sophomore midfielder Edgar Astorga said the team performed well against both Ashland and Tiffin, but didn’t get the points they needed.

“We played really well, but our defense was a little bit shaky which was unfortunate,” Astorga said. “We just got to look back at the film and we can do better and bounce back.”

On Friday’s game in Ashland, both the Eagles and Wildcats were neck-and-neck exchanging goals in the net. Ashland’s Thomas Ardon scored the game’s first goal through the arms of NMU sophomore goalkeeper Fillippo Torelli. However, the Wildcats responded with a goal from sophomore midfielder Callum Olpin, assisted from freshman forward Birkir Baldursson, as the game went to halftime tied at one goal a piece.

The teams’ up tempo offenses continued in the second half. At the 61-minute mark, junior defender Kevin Hoof broke the tie with a header goal to make it 2-1 Wildcats. In the 65-minute mark, the Eagles’ Yusuke Yasumusu and NMU junior forward Sam Popp swapped goals in a minute span.

Torelli finished with seven saves, and sophomore midfielder Nick Metcalfe had two assists on the game. Torelli now has 44 saves in the season overall, which is fourth-best in the conference.

Olpin felt that the Ashland game was winnable, despite the draw.

“It was disappointing for us because we felt that we should’ve won against Ashland, sending us into the playoffs,” Olpin said.

At Tiffin, the Dragons started out controlling the ball effectively. Tiffin was able to find the net at 29:33, as Matthew Tait scored off a deep pass to beat the Wildcat defense to make it a 1-0 game. The Wildcats were outshot 6-5 at halftime.

The offensive pressure picked up for the Wildcats as they poured on 14 shots to four through the rest of the game. Neither shot was able to find the goal. Tiffin would add an insurance goal by Marc Albert Feliu to decide the game at 2-0.

“We did everything that we could in that game, it just didn’t work out,” Poggi said on the Tiffin game. “It’s a funny game. If you can’t score, you can’t win.”

The Wildcats will close out the regular season against the Notre Dame College (Ohio) Falcons in Grand Rapids in hope to get to a spot in the tournament.