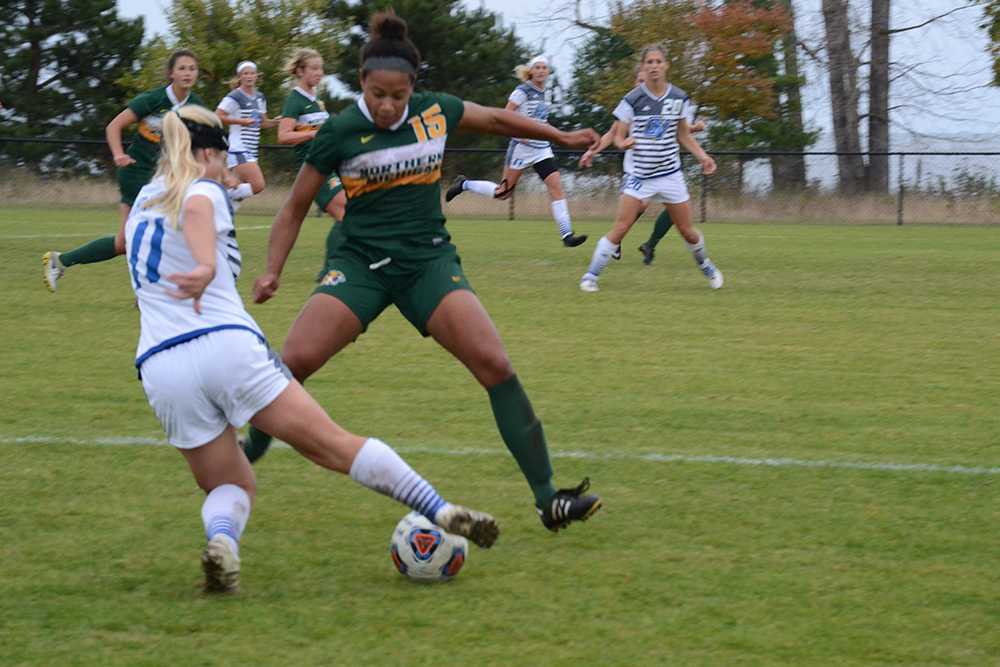 Photo by Lindsey Eaton: Junior defender Raven Mitchell steps up and makes a tackle on a Grand Valley Forward. Last season, Mitchell appeared in 17 games and started in 14. Mitchell had one shot on goal in the season.

The NMU Women’s Soccer team split their two home games this weekend, defeating the Ferris State University Bulldogs 2-1 on Friday before falling 3-1 to the Grand Valley State University Lakers on Sunday.  As a result, the Wildcats have clinched the 7th seed in the GLIAC playoffs.

On Friday, the match started with both teams focused on offense, and NMU put an early tally on the board when junior defender Sophia Sachs headed a corner kick into the back of the net in the 17th minute.  The Wildcats didn’t just look to protect their lead, however, and in the 35th minute senior defender Allyssa Milam doubled the team’s lead on a corner kick from outside the box.

The Bulldogs came out in the second half with a renewed offensive energy, putting nine shots on goal after the halftime break.  NMU freshman goalkeeper Brianna Frontuto was able to keep the ball out of the net until the 81st minute, when FSU’s Bri Rogers was awarded a penalty kick for a Wildcat foul inside the 18-yard box.  Rogers slotted the penalty home nicely, but the Bulldogs were unable to find the net again and NMU came out the 2-1 victors.

“I think it was one of the best games we’ve played defensively,” Milam said.  “Offensively, we capitalized on the chances we had.  I don’t think we had crazy numbers as far as shots on goal, but we took care of business when we had the opportunity.”

Sunday the Wildcats took on an offensive powerhouse in the Grand Valley State University Lakers. The Lakers, heading into the match, had not allowed a single goal in their eight GLIAC matches, while scoring 41 over that same span.  That goal scoring prowess was displayed in the 36th minute, when GVSU’s Makenna Schoolman beat Frontuto and put the Lakers up 1-0.  Seven minutes later, Grand Valley doubled their lead thanks to a goal by Cecilia Steinwascher.

In the 70th minute, the Lakers gave up their first conference goal when junior forward Aimee Colla scored her second goal of the season.  Freshman defender Kaitlynn Benson and Milam both recorded assists on the play.  The Lakers went back up by two in the 77th minute on the strength of a goal by Mia Gale, and that score stood for the remainder of the match.

Milam was honored by the GLIAC as the Offensive Player of the Week after recording a goal and an assist over the weekend’s matches.

“I’m very honored to have received the award, that’s a really cool thing for our team,” Milam said of the honor.  “We have Bri (Frontuto) and Jenna (Halonen) who’ve received it this year as well, and I believe only one player received it last year, so to have a few more numbers as far as GLIAC recognition this season compared to last is a big boost for the team.”

The Wildcats’ next match will be on Friday, when they travel to Houghton to face the Michigan Tech Huskies in a non-conference matchup. NMU will then head to Ashland on Tuesday for their GLIAC Tournament
quarterfinal game.